A rupee a day can keep poverty away!

Calling it ‘One Rupee Revolution’, the 2014 batch of Deeksha College (which houses standard 11 and 12th students) came up with the idea of helping the financially burdened students by depositing one rupee every day in a drop box.

What really starts a revolution? A person? Or a group? Well clearly, in this case, it was a batch of students coming together to financially help the students from economically weaker sections complete their education.

Calling it ‘One Rupee Revolution’, the 2014 batch of Deeksha College (which houses standard 11 and 12th students) came up with the idea to help the financially burdened students by depositing one rupee every day in a  drop box.

The idea was also to support the management to encourage the spirit of giving. The batch got so much involved that even after leaving college, they continued with the initiative at the respective degree colleges.

"The one rupee revolution was started on June 12, 2014 at Deeksha, Thyagarajanagar, on World Day Against child labour. It was the idea of one of the students and it looked doable,  with no imposition and it was all free will," says Dr Sridhar G., the founder of the school and a former IITian. "Students contribute whatever they want. Every morning the box is kept in the classroom and cleared by evening. Students themselves handle the money clearing and keeping track of amount collected. It is good to note that it is a totally student-driven campaign and yet it teaches us all about the spirit of giving," he added. 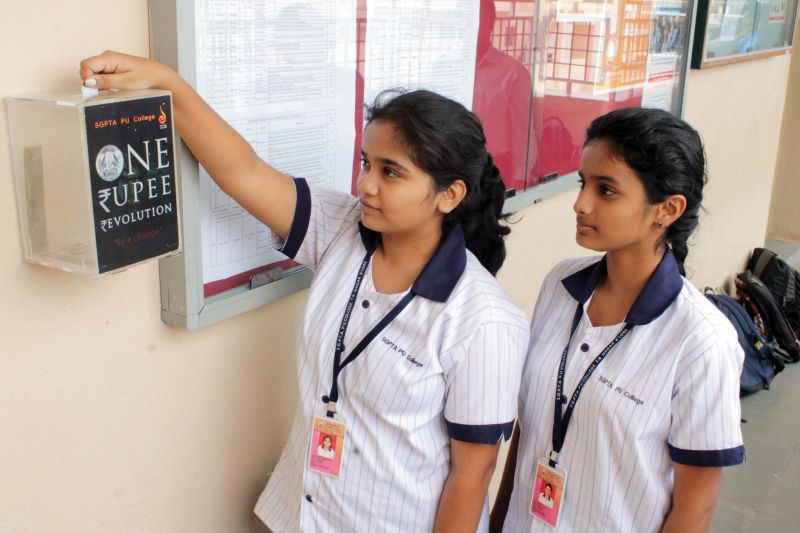 The donations were not always just a rupee. Some students used voluntarily put Rs 365 for the whole year. Some put in one rupee some put in Rs 10.  The launch year, which is the first year saw a collection of Rs 26,000 and the amount collected in the second year was also almost similar. The students maintain the register and every year at graduation they pass it on to the next batch. The money is closely supervised by the management.

Sindhu V., a science topper 2016/2017 batch with a score of 589/600, was a beneficiary of the One Rupee Revolution. She came from a financially weak background.  However, in the second year she refused as the economic condition of her family improved, and she felt the grant should go to someone more deserving. She is currently studying engineering at BNM College.

Another student, Shivswamy, a commerce student with score of 87.5%, was shattered after his father died unexpectedly. As he was finding it difficult to pursue higher education, the One Rupee Revolution helped pay his fees and he is currently doing B Com in PES college.  He got a total of Rs 20,000 to complete his education.

The One Rupee Revolution has so far helped some 50 students. "Such a thought process should always be supported by schools and I believe that these things should not be imposed on students. They should be moulded in such a way that sharing doesn't become an ordeal for them," Dr Sridhar summed up.