Even as the world is doing its bit to promote breastfeeding, with celebrity moms publicly posting pictures of the same on their social media accounts, city-based Dr Santosh Kumar and Dr B. Srinivas Goud of Dhaatri Mother’s Milk Bank have taken it upon themselves to be a part of the global phenomenon.

As India’s biggest mother’s milk bank at Niloufer Hospital completes two years, it is not just growing stronger but there is also an urgent need to expand it. In the last two years, the only human milk bank under the government in the Telugu-speaking states has saved many infants’ lives. 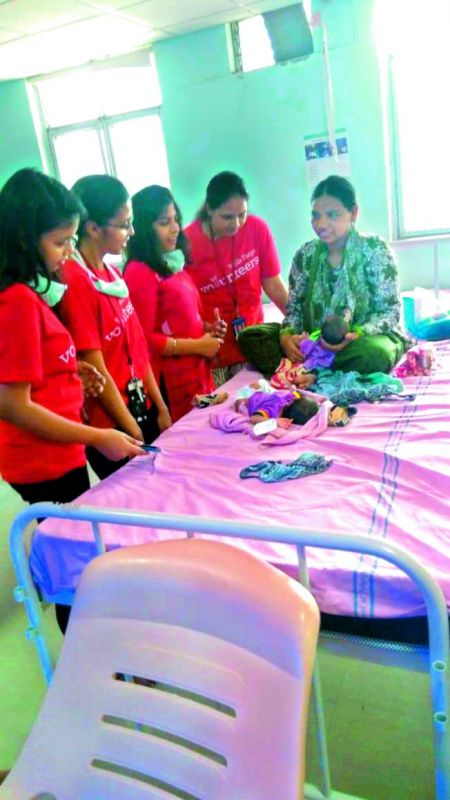 Counsellers helping a mother with her new born kid

Elaborating on their journey since inception, Dr Santosh Kumar, founder and director of Dhaatri Mother’s Milk Bank and an MBA in health care says, “The bank was started in October 2017. From then till June 2019, 18,060 mothers have visited it. I quit my regular job and have been working full-time to make the bank the largest amongst all the 18 full-fledged human milk banks working around the country.”

He adds, “When we first started out, we never thought that we would get such an overwhelming response from mothers, but we are blessed. Even religious differences didn’t lower the count, much like blood donations. Social media groups of mothers also helped to spread the word about the importance of breastfeeding and mother’s milk.”

The facility is also a Comprehensive Lactation Management Center (CLMC) and gives mothers a chance to donate their excess milk to help babies in need apart from counseling new mothers about proper latching techniques, and treatments and massages for sore, cracked, inverted nipples and engorged breasts.

However, even as the bank continues to flourish, they admit that it is a struggle to maintain it owing to limited finances. “Though there are day-to-day running costs which we are maintaining via donations, it is the maintenance of equipment, storing breast milk, analysing donor mothers’ blood samples, collecting and donating milk free of cost — that takes a toll on us financially,” shares Dr B. Srinivas Goud, co-founder and associate director and an MD in hospital and health care administration. With such an outstanding initiative, it was only time that the Hyderabad-based human milk bank inspired many other states to follow suit. “Officials from several states, like Madhya Pradesh have been visiting the bank to study it and has in fact, set up two mother’s milk banks recently. We are also planning to set up two more banks in Vizag and Kakinada with the government’s help,” says Dr Santosh. But creating one or two banks for such a huge population is not enough. “Brazil has more than 250 and the US has more than 100 banks. India has one of the largest numbers of low birth weight babies in the world, with significant mortality and morbidity rates, and we need more help from the government to allocate funds to change the current situation,” concludes Dr Srinivas.