Superheroes of a different kind

Animal rescue is not just limited to rescuing stray dogs and cats - these people also engage in adventurous rescue activities risking their lives to save any animal which may need help.

When compassion for another human being is at stake, greed and thirst for money is on rise, these volunteers have proved to be superheroes in rescuing distressed animals, be it dawn or dusk. 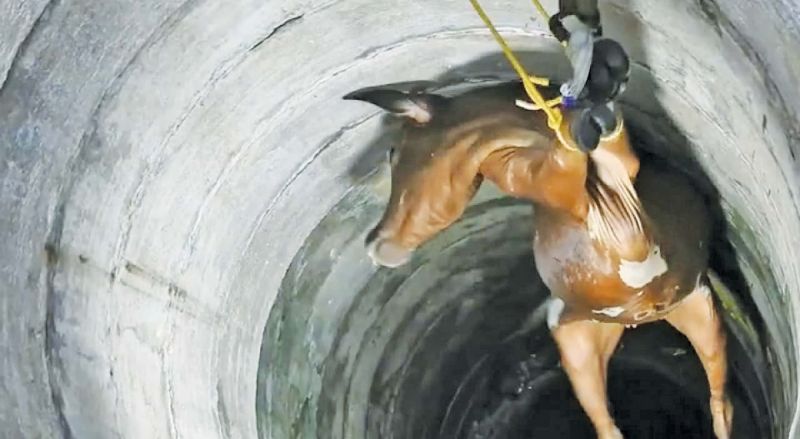 A cow being rescued from a well

During the noisy days of Deepavali when we are enjoying with our families, the volunteers are on the field to rescue the animals which are injured due to fireworks or may have mistakenly fallen into wells due to the sound. Keeping aside their personal lives, academics and professions, the volunteers continue to do good work.

Aparna Ganesan, the iron woman of Blue Cross of India of India, has been involved in more than 100 rescue operations. She has been working as a rescue volunteer from 2017 and is now one of the most senior rescue volunteers there.

She says, "Everyone's role is important in the team - working and coordinating with the team, asking for help when you need it, quick thinking and execution and a sound presence of mind are important core qualities of a good volunteer. Most importantly, one must be physically fit to carry out a rescue". Apart from these, rescue volunteers should be trained in animal handling and should be physically and mentally trained as well.

Velu is a table tennis coach who has been involved in animal rescue operations of Blue Cross India for past 5 years. He came to know about these rescue operations after he rescued an abandoned injured horse on the road.

"Most of the people don't want animals around them", says Velu. "They look at them as a menace forgetting that they are the actual menace for the animals! People have invaded their space and habitats. Very few really want to help & and feel that animals are a part of their world too".

His most adventurous rescue experience was when a goat was stuck in a 300-foot trench for a week and their team worked hard to save it. "We rappelled down the cliff and rescued the goat safely. We are very successful in these kinds of tactical rescues", boasts Velu.

Muralidharan Sivalingam, founder of Indian centre for animal rights and education, is an animal rescuer himself. He has worked in many corporates and currently takes care of the welfare activities in the animal shelter with the help of a few volunteers. He says that saving animals like cows from being slaughtered is very tricky and dangerous as there is politics involved.

"When we send these cows to the goshalas thinking that it is a safe place, there would be an agent who would sell these cows illegally from there. Once I have even got beaten by the local guys while trying to save cattle from being slaughtered in Dharapuram", says Muralidharan. He has been fighting legally for the welfare of animals and has already filed a lot of cases against animal cruelty happening in Tamil Nadu.