“Financial independence makes a woman assertive and empowered. I hope the equality will happen that way too”.

Almost 10 years ago, on a rainy day, Maria Babu’s car’s tyre blew out on a stranded road. Being stranded anywhere with a blown-out tyre is a recipe for frustration, inconvenience, and expense. Without any stress, she started using the car jack lever. She was almost done and the spare tyre was almost fixed properly when a stranger approached her with helping hands, saying she is doing it wrong. “Why can’t ladies do this stuff for themselves when the time comes to fix a dripping faucet, change a tire, or rewire an electrical system?” she thought to herself and believed he was right. But it ended up in a total mess and the man almost broke the lever. From that small but very insightful moment, Maria started believing in her own abilities and doing stuff that she thought she could not do, without hiccups. “Coming from an (unintentionally) sexist environment has made me a loud, proud champion of DIY skills like changing a tyre and many more,” says Maria, who’s fondly called Mariamma.

“This is a service that I do free of cost. This is not to prove anyone wrong or right. I have a driver’s licence that dates back to almost 20 years and since the day I got the licence I have been driving,” she explains. A native of Thiruvambady, she considers the job as a service to the needy. There must be something that inspired her to do it and when asked about it, she says, “I grew up with my parents who are very open and liberal about personal freedom and equality. 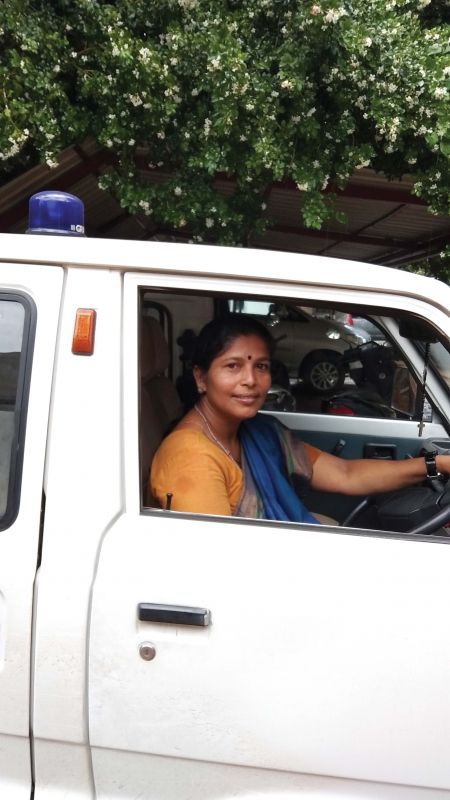 ‘Through the struggle and success of overcoming small hurdles, you'll boost your overall confidence’

They inspired me to do things that mattered for the betterment of society. One of the things I realised was the inequality and gender bias in career options we have in our part of the world. I did my post graduation in social work and have been part of many organisations that work for women empowerment, in and around Kozhikode. One of them was a palliative care centre. So, I decided to drive an ambulance so that I can help them with transportation; also I thought of inspiring a lot of women to choose professions like this, that are mainly male-dominated,” she opens up.

She adds that those who see a female driver are surprised, so they try to overtake her. Being a female ambulance driver wasn’t that easy when she started. “The aim of an ambulance driver, male or female, is to save lives. A wrong move from other vehicles may lead to loss of lives. Risks are high, which have helped me become a better a person too.

Those raised eyebrows while watching me driving an emergency vehicle were actually a sign of the fact that nothing is impossible for women. Since I started driving, women have approached me and enquired how they could drive. They even looked for options to take this as a profession. If a man can do it, why could not a woman?” According to her, the biggest challenge for an ambulance driver is speed.

Maria is not just fighting against gender inequality by driving an ambulance. She knows women should be taught about the inequality around them. “Driving the ambulance was just a part of my many endeavours. I do homecare for needy patients under the guidance of palliative care units, I take personality classes and psychological counselling, handle memory technique classes for children and women, and entrepreneurship classes for women. I am also part of many projects that are undertaken by local government bodies in Kozhikode. I am an active member of the planning committee of our block panchayat and had a chance to talk to women regarding their problems in the workspace. I have heard many women complain about doing housework. I often times try to explain to them that unless it’s something they were hired for, they must stop immediately.”

Mariamma says the government policies that are planned with the aim of women empowerment should be checked to find out how far they have helped women. “Some of the policies in our state help women start small-scale businesses such as agarbathi making, candle making and sewing industry. Animal husbandry policies such as poultry farming are good and have their effects but that also restrict women from going from the safe zone of the four walls of their homes.

They should implement plans that give more job opportunities which enable women to step out of those walls than chain them inside houses or any factory. I could see a lot of sexism and gender inequality in the ongoing plans which they call women empowerment projects,” says Maria.

Maria says she is working on some dream projects with the help of NGOs and government bodies, where she will help women set up small-scale industries and make sure that women are involved in market without the interference of middlemen. “Financial independence makes a woman assertive and empowered. Financially empowered women are a bulwark against societal evils. They should get the profit out of these industries directly and I hope the financial stability and equality will happen that way too.”

Maria, who is also into politics, says a woman’s first enemy is sometimes her own mindset. “Experiment with creating small, novel challenges for yourself on a regular basis. Through the struggle and success of overcoming small hurdles, you’ll boost your overall confidence in your ability to figure things out and improvise along the way. Believe in yourself,” she wraps up.