Method to the Millet

“Be a yardstick of quality. Some people aren’t used to an environment where excellence is expected,” Steve Jobs’ quote seems to summarise what Millet Man and minister of agriculture for state Krishna Byre Gowda has been doing, ecologically in an environment that needs proactive action. The humble millet he is brandishing as a wholesome meal choice with the least carbon footprint in a drought-wrought state will see the light of day with a Run for Millets for all fitness aficionados on April 16 at Cubbon Park, and a Millets Mela, while Krishna Byre Gowda toils in a scenario where political lineage notwithstanding, this mind quietly works towards sustainable initiatives, where understanding the nuances of agriculture, because he was a farmer first, is bringing about change.

Spearheading a millets movement with the Organic Millets Mela 2017 in the city on April 28 to 29 at Palace Grounds, incidentally, the grains have already caught on with fitness buffs in namma ooru. “The idea is to take the message of millets to a national level, find strong markets and connect farmers. If you talk to any old timer, they will tell you that till the 70s and 60s, rice and white flour didn’t exist in our diet! It was composed of some form of millets, and then rice became aspirational. There is a larger health issue we are not addressing, with the type of gravity that is required —imbalanced diets. The youth is already looking for healthier alternatives and millets fit well with the new fad. Traditionally, mudde, roti, idli and dosa are our staples, and now you can substitute the preparations with millets,” says Gowda.

With the least environmental footprint in terms of water requirement, fertiliser and chemicals (80 percent less), it seems pertinent too. When Krishna B Gowda speaks of the millet being the last standing crop during a drought, it’s as if the millet and the minister are on the same path, to persevere and stand resolute in not the best of circumstances. 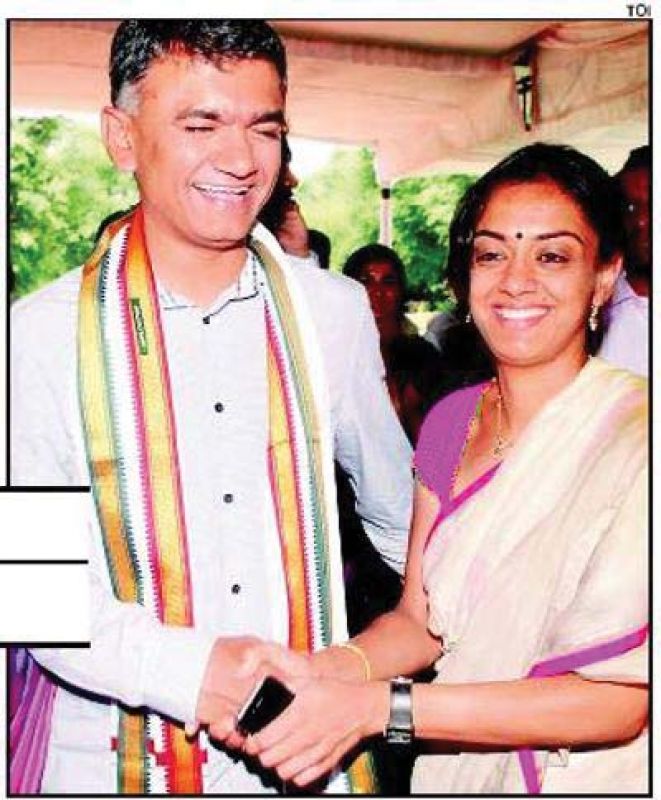 On the personal front, he loves diving, “I am a certified ocean diver, I got certified in 2000 and I have dived in many parts of the world. The best dive sites are around Malaysia, that is where I also learnt to dive. I have dived off Australia, Bali and Thailand and my wife (Meenakshi) is an avid trekker,” says Krishna, who’s approachability and belief is self-assured.

The well-read, articulate agriculturist studied at the American University’s School of International Service, Christ College and went back to farming. A reluctant politician, he took to politics after his father, Janata Dal (United) leader, C. Byre Gowda’s demise. “During those days, I was into agriculture. When my father passed away, I was away from politics and it was a conscious decision. I didn’t want to be a part of it as I could see the pain my father was going through, but a very strong pull from the people was the primary reason,” he recalls.

He found an able partner in his wife Meenakshi, who is an IT professional in her own right, and they form a formidable team. “My wife helps at the constituency level and she is a far better people person than me! (laughs) — Byatarayanapura constituency’s waste segregation is the highest, we’ve just crossed 50 per cent, (with BBMP staff helping). She has a full time or double full time job, works 6 to nine, drives our social media, we have the highest number of people practicing terrace gardens in the constituency, and have done hundreds of workshops with the horticulture department,” says Byre Gowda.

All in a day's work

So how does a young politician work with older mindsets? He laughs, “I am old — 44 years, maybe not old in the political sense, but not a youngster! I don’t see age as a difficulty, I see ideas as a problem. I say, cautiously, the media and public expect the youth as the saviour of Indian politics. I have not seen it bear down in reality. The saviour could be youth who want to come for the right reasons, and that is a smaller percentage. The reasons I am in politics are not necessarily the same reasons others are. As long as you are here for the same reasons, why is there a problem?” he says.

The disillusionment in the political system is evident, and his advice is, “We need constructive engagement, your cynicism is not going to change anything, right? Infact, it is your cynicism that leads to disengagement, which makes the system rot further. Be a conscious voter, atleast. In the era of social media, I don’t think people are able to differentiate fact from fiction which makes it worse. All the more reason, that you, a citizen exercise discretion.”

The divisive nature today, Gowda feels, has to change, “We need to find ways of communicating that the only way we can live a meaningful life and achieve something, is to learn to live together. Our country may not have grown as fast as China but nobody thought India would survive as a plural democracy. We have unimaginable diversity, and having survived as a unit, and come this far (we might not have gone far enough, I accept). Any form of division, even religion does not restrict itself to just that, this recent incident about colour, though it came out inadvertently (black), the person was expressing the logical progression of an idea of ‘us’ and ‘them’ But it goes beyond —  cast, language, COLOUR, etc. The moment you push identity-based ideas, you are alone. This idea of India is unique, we don’t realise it. It is diverse and we are a miracle.”