After the big fat wedding, the Ambanis organised the post-wedding bash before the official reception Mangal Parv. ‘Meet my wife,’ that’s how Akash Ambani introduced his wife Shloka Mehta to the entire paparazzi as soon as he entered the reception ground on Sunday. Shloka Mehta looked radiant in a golden lehenga while Anant Ambani sported an indigo blue kurta. A host of bigwigs from tinsel town, politics and the cricket world attended the glittering function. Bollywood celebrities including Amitabh Bachchan with wife Jaya Bachchan and daughter Shweta Bachchan Nanda attended the event. Later Abhishek and Aishwarya Rai Bachchan also joined them with daughter Aradhya. 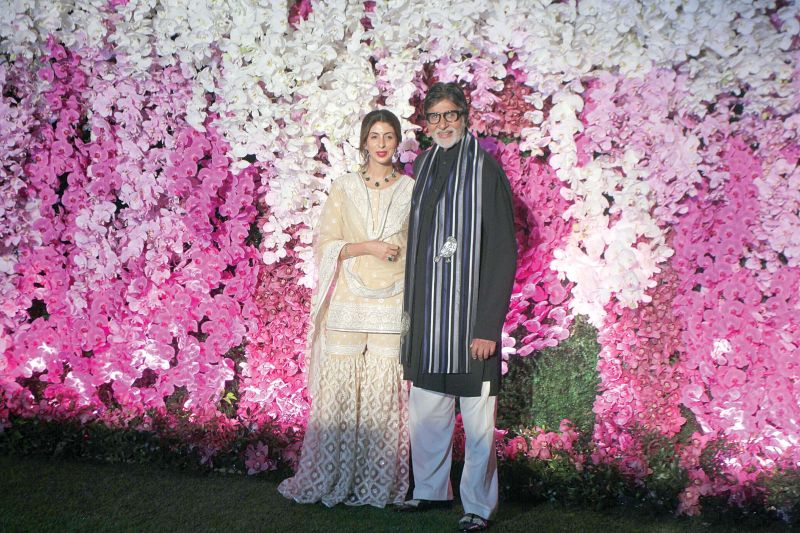 Among other celebrities who graced the occasion were Rajnikanth, Shahid Kapoor and his wife Mira, Sonali Bendre, Preity Zinta with hubby Gene Goodenough, Sachin and Anjali Tendulkar and Shilpa Shetty Kundra with Raj Kundra. In a rare snapshot Rekha, Akshay Kumar and Twinkle Khanna posed together before entering the venue. Shiv Sena’s Raj Thackeray a
nd his wife Sharmila Thackeray made a rare appearance too. Three-time Grammy winner Maroon 5 led by Adam Levine, had the couple grooving to their romantic number She Will Be Loved.