Sunday Story: Raichur Habba – The day when the bullock is king

Like every year, the three-day Mungaru Samskritika Raichur Habba kicked off this year on June 8 and like always, there were farmers, hundreds of them, preparing for the races by washing their bullocks, painting them in different colours and decorating them with cockades, pompoms, forehead knots, hip belts and foot jingles.

The sleepy town of Raichur, which most Kannadigas remember only when there's trouble at its famous thermal power station, suddenly comes alive in June when ferocious bulls thunder through its narrow streets as part of a unique Habba, organised on the lines of the famed Mysuru Dasara.

For those fond of animal races, there's nothing more exciting than the sight of painted and decorated bullocks vying to beat each other as their owners wait in anticipation-not for the prize money but for the sheer thrill of winning the famed race.

Like every year, the three-day Mungaru Samskritika Raichur Habba kicked off this year on June 8 and like always, there were farmers, hundreds of them, preparing for the races by washing their bullocks, painting them in different colours and decorating them with  cockades, pompoms, forehead knots, hip belts and foot jingles.

This is a festival  which truly resonates the beats of the rural heart. The participants are not restricted to Raichur or even Karnataka, they arrive from the whole of Hyderabad-Karnataka, neighbouring Andhra Pradesh, Telangana and Maharashtra. There are farmers who add a colourful touch to the festivities, performing special pujas with sweet dishes like holige, huggi and sweet rice  after which they take the animals  out in a procession to the beating of drums and blowing of trumpets, before racing them to show off their skills.

It's truly amazing as these are the same bullocks that plough their fields on a normal day. As evening descends, the farmers give up tilling their fields to enter their animals in the boulder pulling contest-where bullocks lift sand bags or boulders tied onto their bodies.

Organised by the Munnuru Kapu Samaj of Raichur for the last 17 years, the festival has become so popular  that farmers and spectators make a beeline for it from everywhere. Like  the Mysuru Dasara, which showcases traditional sports and cultural events, the Raichur Habba too holds traditional sporting events and competitions of rural India in addition to cultural performances centred around folklore and other rural art forms.

The festival centres around 'Kara Hunnime,'  a day of thanksgiving marking the beginning of the  kharif sowing season. It's a day when the bullock is king, with farmers paying obeisance to it to express their gratitude for all the hard labour on their fields that helps them make a living. The thanksgiving comes naturally to them as they have for long venerated bullocks as Lord Basava.

"I am happy to decorate my bullocks, which we worship as Lord Basava and offer them puja with sweet dishes on  Kara Hunnime day. It's our way of thanking these animals which toil so hard in our fields,"  says Shivareddy, a farmer from Kallur village of Manvi taluk.

The Munnur Kapus, also known as Balijas, a farming community from Raichur and  areas bordering Telangana, have always celebrated Karu Hunnime, but in 2000, they decided to make it a bigger event with the inclusion of rural cultural and sporting events, that  have been gradually fading owing  to the onslaught of modernity.

"We started organising the traditional Karu Hunnime on a  grander scale and called it Mungaru Kapu Samskritika Utsav," explains Mr A Papareddy, a former Raichur city legislator, who is the chief architect of the festival.

What began on a small scale as part of the Karu Hunnime  celebrations,  has now grown to become a major festival, which showcases not only local sports and culture, but also dances such as the bhangra that are alien to the region.

"Our aim is to organise the Samksritika Ustav on the lines of Mysuru Dasara. On the first day of the habba, a portrait of Goddess Mahalakshmi is taken out in  procession on an elephant led by horses, and camels. I'm proud to say that my community is doing what the government is not," says Mr Papareddy.

The major attraction at the festival is the  boulder-pulling contest by pairs of bullocks. While the weight of the boulder on the first day, which is reserved for only Karnataka 's farmers, is 1.5 tonnes, it is increased to 2 tonnes and 2.5 tonnes respectively on the second and third day, which are open to bullocks from places like Ongole and Khammam in Andhra and Udgir, and Aurangabad in Maharashtra. "Around  45 pairs of bullock from Andhra Pradesh, Telangana and Maharashtra participated in the event this year. The winning bullock pairs were presented cash prizes," reveals Mr Papareddy. "This year besides folk and classical dances, there were music concerts featuring film songs," he adds.

There's nothing to match the love of these rustic folk for their bullocks which they treat like family. The Raichur Habba only helps reaffirm these man-animal bonds of trust and affection so missing from the urbanite's life.

Maybe, this is the habba which every metrosexual, caught in the daily grind of meeting expectations and busting stress, should visit to realise that deep down in our minds, we are still as pristine, simple and uncomplicated as the farmer racing his bullock at the Raichur Habba. 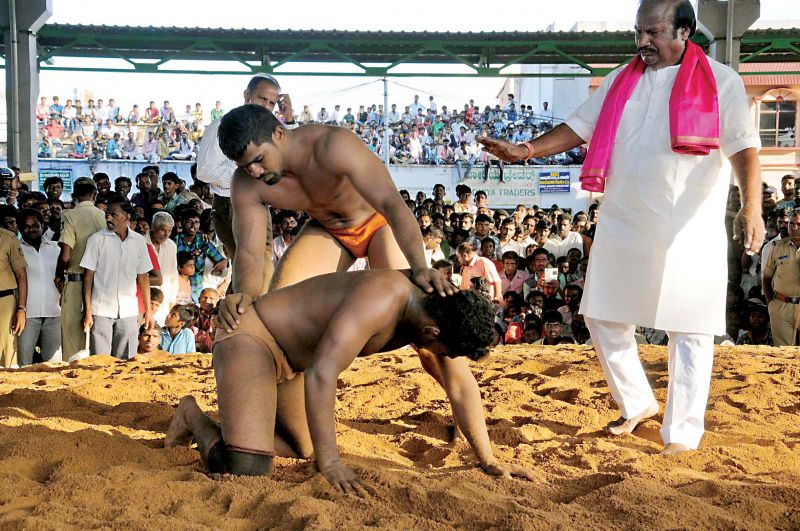 The Raichur Habba only helps reaffirm these man-animal bonds of trust and affection so missing from the urbanite's life.

For this farmer, rearing bullocks for competitions is a passion
Fifty-year-old farmer Anjaneya of Ramdurga village in Deodurg taluk has lost none of his  passion for rearing bullocks when others farmers are selling them to make way for machines to help them cultivate their fields .

The farmer, who owns 50 acres of fertile land irrigated by the Krishna river, is somewhat of a local  hero as the two sturdy bullocks  he has raised, have proved a winning combination at various boulder -pulling competitions.

"For the last 14 years my animals have been winning prizes in boulder-pulling competitions in Nandyala, Shreeshailam, Vijayawada and other towns and cities of Andhra Pradesh, besides Raichur and Vijayapura," he says proudly.

Mr Anjaneya, who intends to participate in this year's Mungaru Utsav as well, ensures that one pair of bullocks is always ready in his cattleshed to fetch him laurels. "I bought these bullocks for Rs 3.8 lakh four years ago when they were young. I have nurtured them  all these years and now they pull a boulder weighing 2.5 tonnes for a distance of 700 metres within 20 minutes," he reveals.

Though he has received many offers from farmers in neighbouring Seemandhra and Telangana to buy the bullocks for Rs 25 lakh, Mr Anjaneya has turned them down. "Participating in boulder-pulling competitions is my passion, not a business," he says. The bullocks participate in around 50 competitions a year between October and June, and  work in the fields the rest of the time. "The animals are fed a special diet of three different types of grains, usually ragi, horsegram and pearl millet that are boiled and mixed with jaggery every day.

"Each bullock consumes 15 kg of grain and 3 kg of jaggery daily, besides the regular fodder," says the farmer, who  makes sure that the bullocks' shed is clean and even protected with mosquito nets.