Chetan Bhagat asks fans to send him photos of his book, gets thoroughly trolled

Chetan Bhagat’s latest book, One Indian Girl, has been in the news for being slammed by critics for pandering to the very stereotypes that it claims to fight. But that hasn’t stopped India’s best-selling author from asking fans to show him a little bit of their love.

#OneIndianGirl in Mykonos, Greece. Send me pics of the book in a beautiful backdrop. Will RT best ones. Let's see your phone camera skills! pic.twitter.com/nGAF9QiFd0

Soon enough social media users decided troll him by accepting his request but with an ironic twist. To be honest, it’s hard to imagine that Bhagat didn’t see that coming.

.@chetan_bhagat Take a look sir, your book in the most beautiful backdrop. Please RT. pic.twitter.com/ZiXSuFs1tm

.@chetan_bhagat No backdrop can be more beautiful for your book than this sir. pic.twitter.com/PgGNclrYGP

.@chetan_bhagat I know my camera skills suck but still gave it a try. pic.twitter.com/PlSw16KvrC

After a while, Bhagat had no choice but to accept the trollage of being an inevitable consequence of his actions. 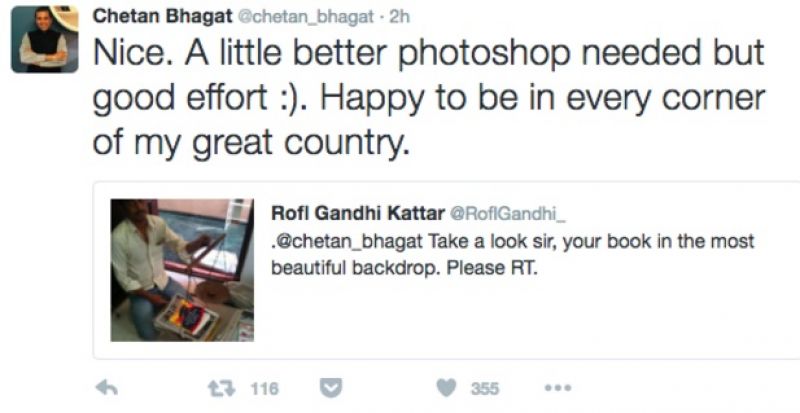