Presence of mind and a coo- rdinated effort between the Forest officials led by Officer V.S.N.V. Prasad, and the police, helped rescue the 3-year-old leopard which fell into an agricultural well in Nirmal district.

“It’s a TIGER!”
Thus went up a farmer’s loud warning and soon the whole village of Rajura was wide awake, alerted by a predator’s presence. Turns out, it was a leopard stuck in a well. And so, Rajura residents (Khanapur Mandal in Nirmal district) witnessed a filmy rescue operation on Saturday morning.

Apparently, farmers spotted a three-year-old leopard which was struggling to come out after it slipped into a 20 ft agricultural well. The villagers quickly alerted forest officials, who wasted no time in reaching the spot at 10 am.

The officials initially felt that a trained veterinary doctor was needed to tranquilise the animal before rescuing it. But they did not have the luxury of time. “Since it takes 2-3 hours for the doctors (who were from Hyderabad and Warangal) to reach the spot, we wanted to try something quick. So our team thought of a rescue operation,” explains V.S.N.V. Prasad, Forest Officer, Nirmal district. 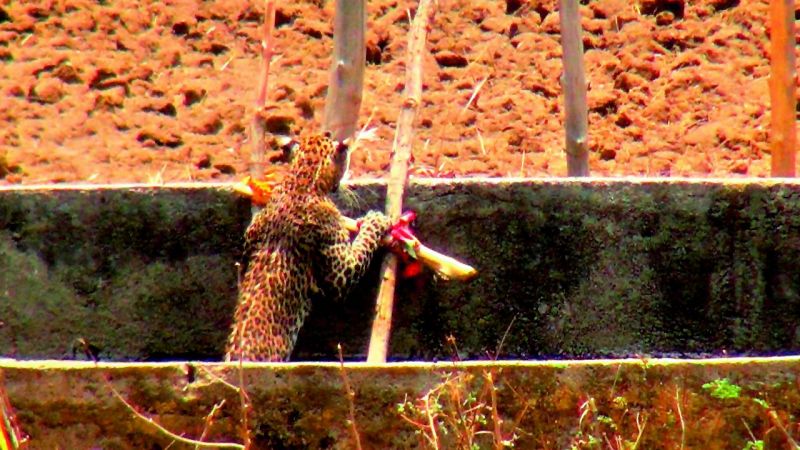 The leopard was seen slowly making way for the ladder and started climbing.

The drama unfolded with the aid of an impromptu ladder. “We were worried that the leopard was hurt, or might misunderstand our rescue efforts as hostile,” reveals Prasad. “So we quickly made a ladder out of bamboo and lowered it down the well slowly, and to our surprise, the leopard quickly moved aside, making way for the ladder! And then it started climbing. Luckily, it was still lucid and sensed that it can climb out with the help of the ladder.”

One of the challenging aspects of the rescue operation was controlling the mob. “It was difficult; people were shouting and screaming. Already the animal was in a panic; we were afraid that the it may be more agitated by all the noise and attack humans on leaving the well; so we took the help of police (SP and DSP) to move people one kilometre away from the well so that the animal had a safe exit; that’s how we started the rescue operation in the first place,” explains Prasad.

Everyone agrees that a coordinated effort between forest officials and police department has managed to make this rescue operation a success. “Had we taken more time, it would have been difficult to control both the crowd and the animal,” Prasad shares, adding, “We are tracking the leopard’s movement through our CC cameras in the forest. For every five kilometre distance, we have arranged water pits for wild animals so that they don’t come into villages to slake their thirst.”

Around 80 forest officials and police took part in the two hour operation. “Our primary objective was to rescue the animal without any conflict with humans, and we are glad we have achieved it. We wanted to make sure that animal is safe and that people are not around after it comes out,” he replies. “It took the leopard around 20 minutes to reach the top. After it came up, it quickly fled away into the nearby forest.”