DECCAN CHRONICLE. | ANUPAMA SUBRAMANIAN
Published Jun 9, 2019, 12:08 am IST
Updated Jun 9, 2019, 12:44 am IST
The actor also said all this is an attempt by vested interests who want to sabotage the building construction.

Team Bhagyaraj who will be locking horns with Vishal & Co.

There is going to be a fierce battle in the much-awaited Nadigar Sangam election (2019-22) to be held on June 23 in the city.  Opposition is building for the Vishal-led team named Pandvar Ani.

Veteran Bhagyaraj has thrown his hat in the ring, pitting himself against Nasser for president. The opposition team is led by Isari Ganesh, an educationist, producer and actor who himself is also contesting for the secretary post.

Surprisingly, a few like Kutty Padmini and Nitin Sathya who were in the Vishal team have jumped to the other side. Actor Udhaya, who campaigned for Vishal in the previous elections, changed sides as he was miffed with what he saw as a double standard in dealing with small film producers, with his own Uttaravu Maharaja suffering. Sources say the team has approached Jayam Ravi to contest against Karthi for the treasurer post.

A day after actor Saravanan credited Vishal for his good work in the Sangam, the news of Isari Ganesh opposing the Sandakozhi star surfaced.   Saravanan had said that the current office bearers are doing good work for the SIAA, and hailed Vishal for the construction of Sangam’s building. “To those who want to stand opposite Vishal, my request is, don’t contest this time. Let the work on the building proceed without hindrance,” he was quoted saying. 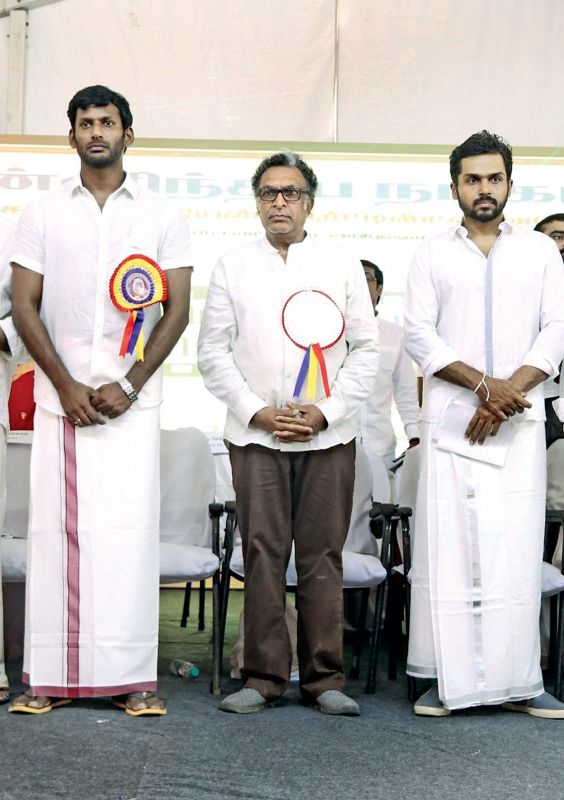 Incidentally, Isari Ganesh was also supportive of the present office bearers — president Nasser, treasurer Karthi, and Vishal - and recently even presented them with `1 crore towards the Nadigar Sangam building, in memory of his father Isari Velan.

Vishal has ruled out any political pressure. “Please do not bring politics inside SIAA. There’s absolutely no political interference here. In fact, our team will be meeting TN CM Edappadi Palanisamy and take his blessings before elections. We have asked for an appointment. And we want him to inaugurate our building once it is complete.”

When asked about the problem with Isari Ganesh, he said, “There was difference of opinion between us on certain things. So, we decided to face the elections separately.”

He went on to add in a lighter vein, “People opposing me is not a new thing to me and I have seen enough in my life. Even if I stand in an apartment association election, there would be opposition.”

The actor also said all this is an attempt by vested interests who want to sabotage the building construction. “A few are trying to stop the construction of our dream building for Nadigar Sangam. However, we are confident of winning the elections for this term and no one can stop us from completing it.”

On the delay in the construction, Vishal said, “S.Ve.Shekar has filed several cases against us in vain, which disrupted the speedy process of building construction.”