Be the first to know Baby Sussex's name!

The world was patiently waiting to see Baby Sussex and guessing what the Duke and Duchess of Sussex would finally decide to call their baby boy. (Photo: Instagram/sussexroyal)

London: Finally the wait is over and the Duke and Duchess of Sussex have revealed the name of their baby boy. Known for doing things their own way, the Sussex royals chose to disclose Baby Sussex's name via their Instagram account.

The post stated, "The Duke and Duchess of Sussex are pleased to announce they have named their first born child: Archie Harrison Mountbatten-Windsor." 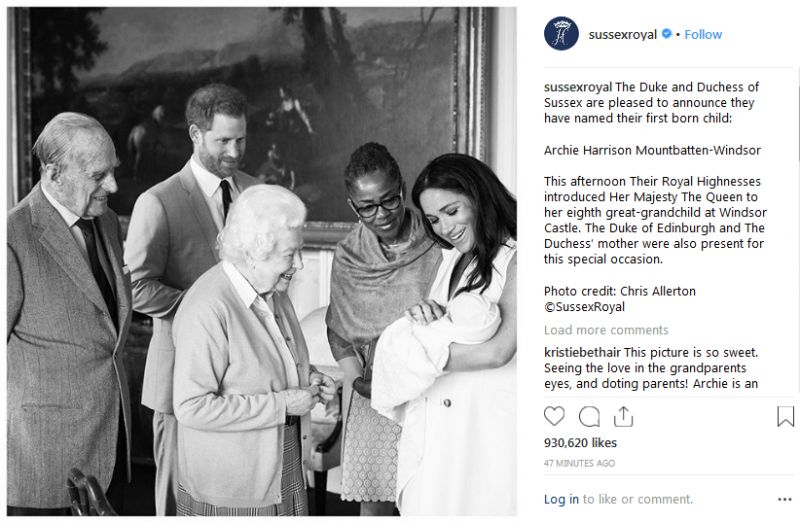 Archie Harrison is the first Anglo-American member of the British royal family ever and is eligible for US citizenship should his parents want it. (Photo: Instagram/sussexroyal)

The world got to see the royal baby for the first time today and also learn his name, all in the span of a day. The announcement came hours after the proud parents posed for cameras, helping satiate a huge global appetite for images and details of the royal baby, at the St George’s Hall at Windsor Castle.

The couple left the press event to introduce the baby to his great-grandparents, Queen Elizabeth II and Prince Philip. Baby Sussex is the eighth great-grandchild of 93-year-old queen, Britain’s longest reigning monarch. Doria Ragland, Meghan’s mother was also present on the occasion. She has been staying with the couple at their Frogmore Cottage home near the queen’s Windsor Castle residence.

The British gambling industry was booming with bets on the possible royal name.  Britain’s legal bookmakers had reported high interest in the names like Alexander, James and Arthur recently. People were also speculating if Baby Sussex would be named Spencer, after the maiden name of Harry’s late mother, Princess Diana.