A passionate animal lover, senior IPS officer C.V. Anand recalls having a dog at home ever since he joined the Indian Police Service. And almost every morning, he takes time out from his busy schedule to groom his four German Shepherd pups. Patiently, he cleans them up, brushes their fur and constantly monitors them for any cuts or wounds besides keeping a strict watch on their diets.

But now, a sweet gesture by the IPS officer has made his force — the Central Industrial Security Force (CISF) and the Rajiv Gandhi International Airport Authorities, very proud of him.

The 1991 batch IPS officer is gifting three German Shepherd puppies that he nurtured for three months to the airport, marking the first time that such high quality dogs will be seen at the airport for security purposes.

“I am gifting the three German Shepherd puppies to the Hyderabad Airport as part of my duty to my organisation and national security. The airport has three canine vacancies and when I came to know about that, I offered the three canines,” says Anand, who is on deputation with the CISF and heads the airport sector. 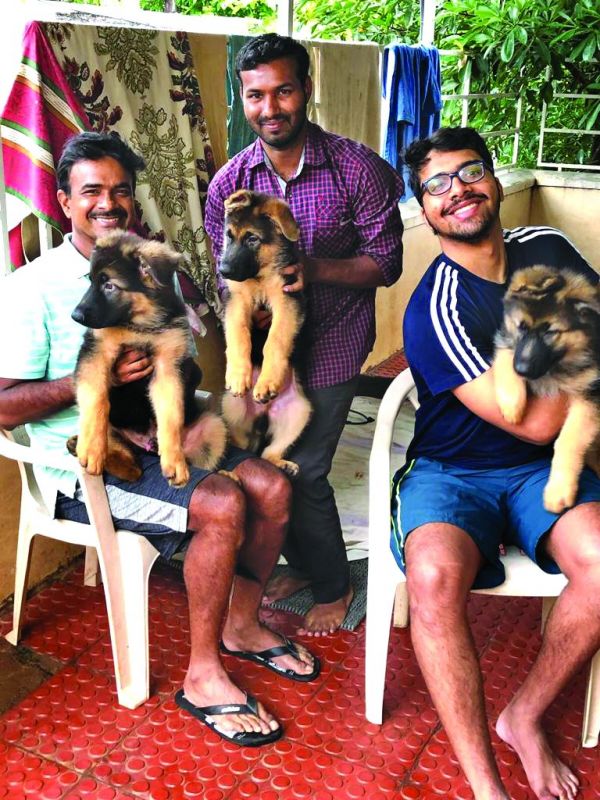 C.V. Anand with the puppies, which he is going to gift to the Central Industrial Security Force (CISF) and the Rajiv Gandhi International Airport Authorities on Wednesday.

Born on May 14 to Hazel and Gordon — both pets that are closely attached to C.V. Anand and his family, the IPS officer says that last year, Hazel was judged the best breed in the show dogs competition and also stood third across all breeds in the International Hycan show. “Both are champion show dogs and take part in competitions,” he says.

But his love for German Shepherds began while working in Warangal district where they used to accompany police personnel during search operations or when visiting a crime scene. He then liked the breed which was much more intelligent, protective and work minded when compared to other breeds.

“My desire to have the best German Shepherd was fulfilled when a friend of mine — Vishal, who owns Blitzhaus Kennels, gifted me a male pup of 45 days in 2013. A year later, I got Hazel as a companion for him. He is an aggressive fellow but is highly protective about me, my wife and two sons. No one can come near us if he is sitting on guard duty around us. On the other hand, Hazel is a sweetheart and friendly and both pets are an integral part of my family. Not having sisters or daughters, Hazel has exposed me to the troubles a girl or woman goes through during periods, pregnancy or deliveries. My entire family has taken special care of the pups ever since they were born,” says Anand, a Telangana cadre IPS officer, crediting wife Lalita as an equal partner who looks after them with the same gusto.

“In fact, it was her idea that high quality canines should serve the country. They have greatly influenced my sons too, who have become more patient and caring,” he informs.

With the gift of these three puppies, the sanctioned strength of the dog squad at the Hyderabad Airport will now increase from 9 to 12. “I readily offered to give the three canines as a sense of loyalty to my organisation —CISF — and the airport sector that I am heading. This is the first time I have gifted puppies,” says Anand, who will be formally handing over the German Shepherds to the Chief Airport Security Officer (CASO) on Wednesday.

Gratitude to the goddess