A wanderer with A message

“The world is vast and meant for wandering,” wrote novelist Nick Burd. In the case of Nigin Binish, wandering takes on a whole new meaning. The man who made headlines by hitchhiking from Coimbatore to Kashmir with the message against food wastage was in Kerala as part of his another venture, with the same motto. This time, he is riding his skateboard, which he calls one of the favourite things in his life.

“I knew it would be more challenging with my second-hand skateboard (laughs). Yes, it is a secondhand skateboard and I was going to go around the country. My philosophy was, whenever you try to push your limit, there would always be people who try to drag you down. Whatever happens doesn’t give up on your dream.” During this expedition, he has planned to teach skateboarding to at least one person a day and motivate them to follow the active lifestyle. Though, at first, he had planned to travel around the country crossing more than a thousand kilometres, he had to make the trip short by 500 kilometres starting from Coimbatore. But Nigin says during that journey, he could talk to different kinds of people and experience their culture. “I taught some street children how to skate and I could also learn a lot from them,” he adds.

It was last year that Nigin, a native of Kanyakumari, hitchhiked from Coimbatore to Kashmir with a message on hunger and food wastage. The journey was not the result of an adrenaline rush. He had happened to see some awful things on a street during his studies in Coimbatore. “Though I used to cycle a lot and tried various modes of transport, I was not an ardent hitchhiker, to be honest. During my college days in Coimbatore, I saw a handicapped person eating food from a trash bin, which moved me,” says Nigin. He says he then decided to spread the message against wasting food and started his walk. “I was penniless, too. I had to beg to people for food and water. It was very tough at first. But, I had already cycled across south India a few years ago and had worse experiences. So, I kept on going.”

During all his trips, whether he is riding a skateboard or cycle or even walking, Nigin had to find free spaces to sleep.

He has slept anywhere he could find a ‘comfy’ straight platform. Earlier, he had made a 3200-km bicycle trip to raise awareness on issues like water conservation, coastal erosion and the need to read more books. That followed a hitchhiking across India and Nepal.

So, what inspires him to do this? Why does he travel every year? “The main objectives of my journeys are to interact with as many people as possible and spread the messages which I really care about. I was born in a fishermen family in Kanyakumari. Whenever someone asks me where I come from and what my father is doing, I tell them that my father’s a fisherman. Sometimes, they chuckle and sometimes they say, ‘So, you would only eat fish daily’. People have even asked mean questions like do I smuggle goods and all! People do have a lot of stereotypical misconceptions about others. I have seen a lot of people, experienced a lot and been a victim of marginalisation. These kinds of things motivated me and I started spreading my story, first to friends, then to strangers.

“Whenever I go on a trip, I try to talk to children. I try to arrange a meeting with local school children. And most of the time, I share my experiences with them — how a boy from a fishermen family started dreaming. If I could inspire one person at least, then I am happy.” 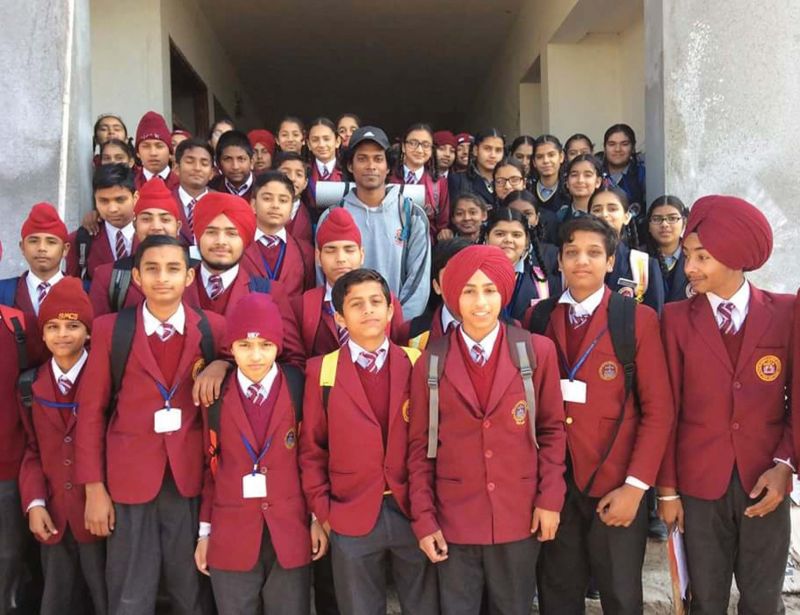 Nigin with school children during his hitchhiking

An engineering graduate, Nigin was also part of a TEDx talk this year in Veltech University in Chennai. Though he had to stop the skateboarding expedition after 500 km, Nigin says he would never stop travelling and sharing messages and stories with people. And when asked about the skateboarding, Nigin says, “People should learn how to ride one. They will not think of any other mode of travel if they start loving skating.”

Nigin is absolutely enjoying this simple and carefree way of life. “Smooth roads, meeting new people, hangingout on the beach, streets, mountains, classrooms, coffee shops, sharing ideas and stories with people. If only every day is like this,” Nigin sighs. He had been selected to the Climate Force Arctic 2019 representing India, but sadly he could not attend it due to lack of sponsorships. He hopes to attend it in the near future.

Of course, his ‘adventures’ are not at all smooth sailings. What makes him keep going is his never-say-no attitude. He is a freelance motivational speaker, skateboard and hover board trainer and visits schools to share his ideas with children. Nigin assures, “Skateboarding adventure was just the start of another chapter in my life and that I will be back.”