‘She’s a handful. She had some choice words for us in the clinic when we didn’t book her case in two weeks,’ says the doctor.

A woman was shocked when she heard her doctor insulting her while she was being sedated for a surgery. Ethel Easter from Texas decided to secretly record her hernia surgery after she had an unpleasant conversation with her doctor.

The device was hidden in her hair extensions. Easter told Fox26 that she cried when the doctor informed her that she needs to wait for two months to get the appointment for the surgery.

She played the recording after the surgery and was horrified to listen to the nasty comments made the doctor and his team about her body and about touching her and also a reference to Bill Cosby.

After the doctor told her she would have to for two months, Easter told him: “I was like, I can’t wait for two months. I am terminally ill right now”

Doctor got very abrupt and said, “Who do you think you are? You have to wait just like everybody  else.”

She got nervous and decided to hide a recorder in her braided weave before the surgery at a hospital operated by Harris Health System.

As soon as she is heard starting to snore on tape, the doctor is heard talking about her with his colleagues in the operating room. 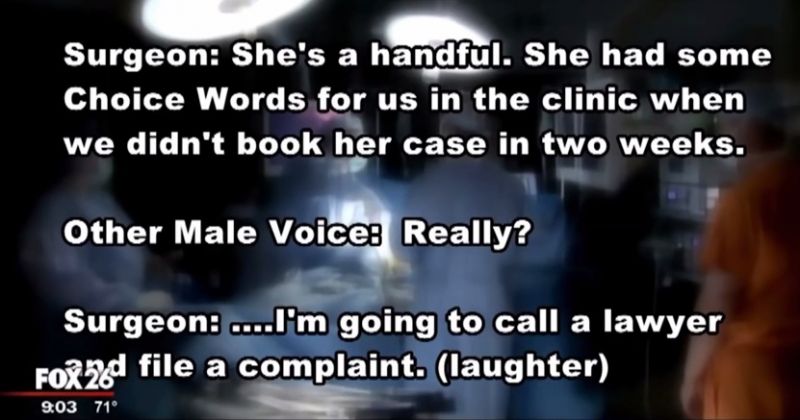 In the video soon after you hear Easter snore, her surgeon says, “‘She’s a handful. She had some choice words for us in the clinic when we didn’t book her case in two weeks.”

He talks about how Easter said she would call a lawyer and file a complaint and other were heard laughing.

On of the man in the OR is heard saying, “That doesn’t seem like the thing to say to the person who’s going to do your surgery.”

Easter says that the medical professionals made very hurtful comments about her body and also about her belly button.

“One of the doctor said while operating Precious meet Precious, as if I was this fat black woman,” says Easter. ‘Precious’ – a reference to Gabourey Sidibe’s character in the 2009 film.

She also informed that one staff member referred to her as ‘queen’ and felt sorry for her husband.

Easter has also said that she doesn’t intend to sue anyone but just wanted to share her story. A Harris Health System spokesman was not available for comment.