All in his name

Self mutilation by the devotees is regarded as an apology for their wrongdoings or sins.

The custom of breaking a coconut on head of a devotee on the occasion of Aadi festival in the Karur Devi temple hit the headlines recently. In temples like Palani Murugan temple, Tirupati Venkateshwara temple, devotees tonsure their heads and donate their hair to the gods as an offering in the belief that their wishes will get fulfilled.

Marriage between donkeys to make a plea to the rain god is another prominent custom followed by the Hindus for a long time. Performed as any other wedding with all the orchestra and rituals, the mangalsutra is tied to the female donkey (bride) in the presence of a priest in the belief that the rain god Varuna would bless the village or city with rains the same night.

“Reality is a manifestation of our beliefs — people believe that the marriage between donkeys will bless them with rain, so it may get fulfilled”, says astrologist Ravi Chandran.

In Karnataka this same custom comes with a twist — the donkeys are replaced by frogs. It is called ‘Mandooka Parinaya’ and the locals believe that performing it would bring rains. 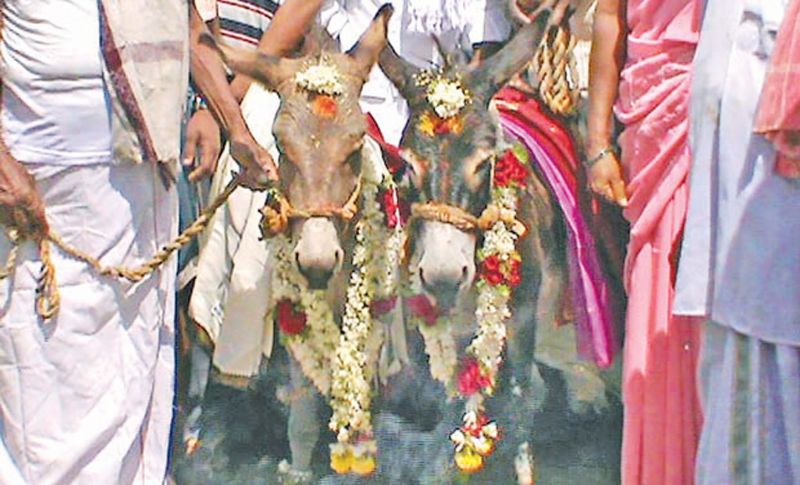 During the month of Thaipusam (auspicious month of lord Muruga) devotees pierce their tongues with a Vel (a belonging of lord Muruga) as a vow to remain silent. They also pierce their body and use it to pull heavy chariots in the belief that God may hear their wishes and fulfil them. Self mutilation by the devotees is regarded as an apology for their wrongdoings or sins. Ravi Shankar explains, “Piercing of Vel in humans tongue can be seen as acupuncture which would help in blood flow. Why do you see it as a superstition?”

Friday the 13th is considered as an unlucky date for hundreds of years by the Christians. This tradition is said to have begun in the middle ages. The superstition surrounding Friday the 13th is thought to originate from the Last Supper, attended by 13 people — Jesus Christ and his 12 disciples — on Maundy Thursday, the night before his crucifixion on Good Friday. The number 13 is therefore associated with Judas Iscariot, Christ's betrayer, and is regarded as imperfect compared with 12, which represents the number of months in a year. Lenin, an entrepreneur says, “Friday the 13th is a Hollywood inspired hype, it has nothing to do with Christian beliefs”.

Flagellation is the beating or whipping of the skin, most often on the back, and often drawing blood, as a bodily penance to show remorse for sin. Early Christians believed that the notion of bodily penance allowed control of the body and emotions in order to focus more fully on worshipping God. But in some countries like the Philippines, this is a re-enactment of the suffering of Jesus Christ.

In Islam, on the 10th of Muharram or Ashura of the Islamic calendar, Shia Muslims beat themselves with a whip or chains and shed blood to mourn for the death of Hussain, the grandson of prophet Mohammed, who was slain in Karbala. “The Muslims beating their chests is a depiction of mourning for the martyrdom of their leader as an expression of their grief”, says Thameem, an event manager.

Some minor Islamic communities also practise Female genital mutilation (FGM). The procedure is generally performed when a girl is seven years old and involves the total or partial removal of the clitoris in order to inhibit her sexual urges and pleasure. Since it’s performed on minors without consent, this practice is being debated and shunned by many.