Notching up the laughs

What if the Avengers Infinity War was set in Hyderabad? What happens when Salman Khan meets Deadpool or if Sanju (Sanjay Dutt) was an engineer? — Faultmaker has a take on everything, but with a Hyderabadi touch.

Run by 21-year-old Syed Bashaar, who recently passed out of BVRIT and 22-year-old Mohsin Ahmed, a fitness trainer, the YouTube channel has parodies, comedy sketches, short animated comedy videos and much more. 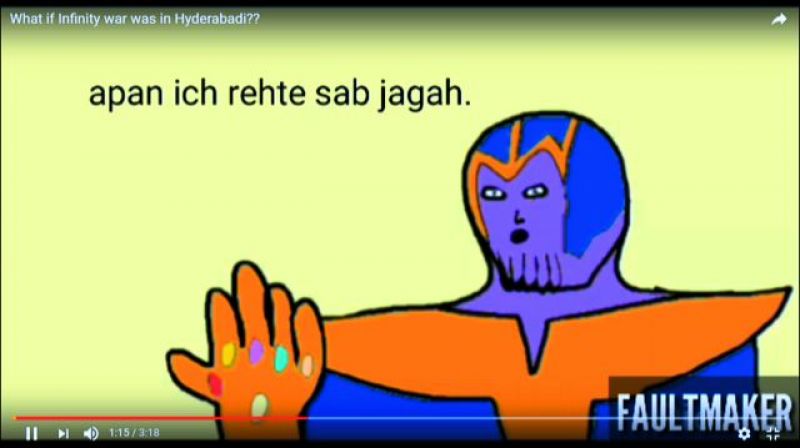 The video on Avengers Infinity War featuring a Hyderabadi Thanos

“I was originally part of a famous Hyderabadi channel called Shakeel Bhai and had been running Faultmaker as an alternate channel where I could experiment with my direction, script and other things. After the channel got dissolved, I shifted my focus back to Faultmaker,” explains Bashaar, adding, “Earlier, Mohsin and I ran the channel together with two other friends, but they quit as it wasn’t picking up. Mohsin and I were however, very serious about this project. The channel picked up slowly as I started uploading dubbed videos of Doraemon and Shin-Chan among others.” Bashaar admits, “I could grab the attention of the Hyderabadi audience and though it made people laugh, the videos were not high on content.” Mohsin adds, “We then turned our attention towards animation. Our target was to go nationwide and we were able to achieve it. We also kept the audience who might not understand Hyderabadi terms in mind while making the videos.” 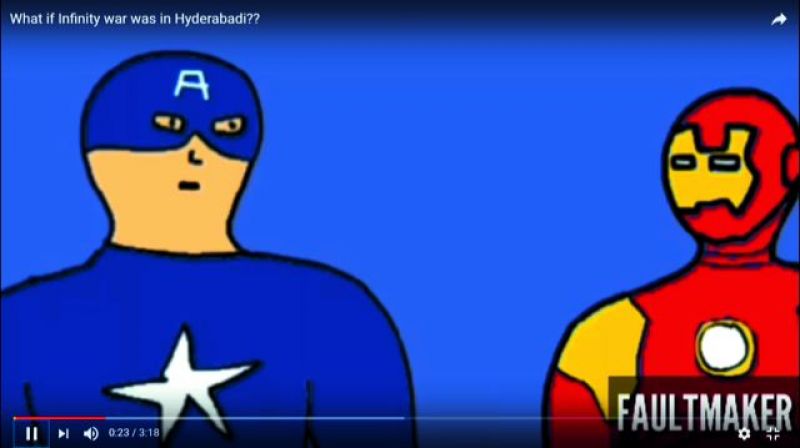 While Bashaar is an aspiring stand-up comedian and is getting a script ready for his show, Mohsin is good at singing. It all started with a video they made for EDM star Nucleya. Then came the Hyderabadi version of the Avengers Infinity War, which went viral and boosted their popularity even further. Meanwhile, they kept making many other videos, including a parody on the show Friends and a Hyderabadi version of Despacito. “We are gradually grabbing the audience who support good content,” says Bashaar, who mostly writes the scripts while the voiceover and animation is done by both.

Interestingly, Mohsin took up only an evening shift at the gym to concentrate on the YouTube channel while Bashaar let go of a job opportunity so that the channel wouldn’t get hit. “We love YouTube and this is our career now,” says Mohsin, adding that they have plans to launch two more channels (for singing and fitness) soon.

So, what is their USP among the several other Hyderabadi YouTube channels that already exist? “Many YouTubers here try and copy what is famous internationally and give it a Hyderabadi twist. They are happy grabbing just the Hyderabadi audience and don’t want to go beyond that,” says Mohsin. “We are trying to up the standard of Hyderabadi comedy. I am planning a comedy against the backdrop of a post-apocalypse world,” says Bashaar, adding, “But we did not reach this position without our share of struggles. For months, we tried our hand at different kinds of videos, including pranks. We were on the verge of closing the channel. But things worked in the end and our patience paid off.”