Chefs and culinary enthusiasts alike must embrace the cycle of learning and unlearning, said celebrity chef and TV host Vicky Ratnani during his master class at a dessert bar in the city. Around 100 members of the YFLO attended the masterclass, wherein Vicky primarily taught his recipes and methods behind three dishes — salad, cauliflower rice, and handmade pasta.

The chef, who once landed an opportunity to cook for Nelson Mandela during his stint on a cruise liner, said, “In addition to my recipes and techniques, I also discussed with the attendees the significance of having an open mind in the kitchen, of eating as per the season and most importantly, of eating healthy — versus eating “diet food”. It’s quite a myth that healthy food cannot be delicious — any food can be delicious if enhanced with the correct spices — butter and cream aren’t the only sinful choices.”

Vicky believes that every culinary enthusiast must know their local market (and not just the supermarkets) inside out. “Local ingredients are carriers of our culture and tradition, and buying local produce is a good way to support our farmers and facilitate continuity in the demand and supply chain,” he explained. Apparently, the variety of produce available in Hyderabad’s local markets is why he loves the city so much. 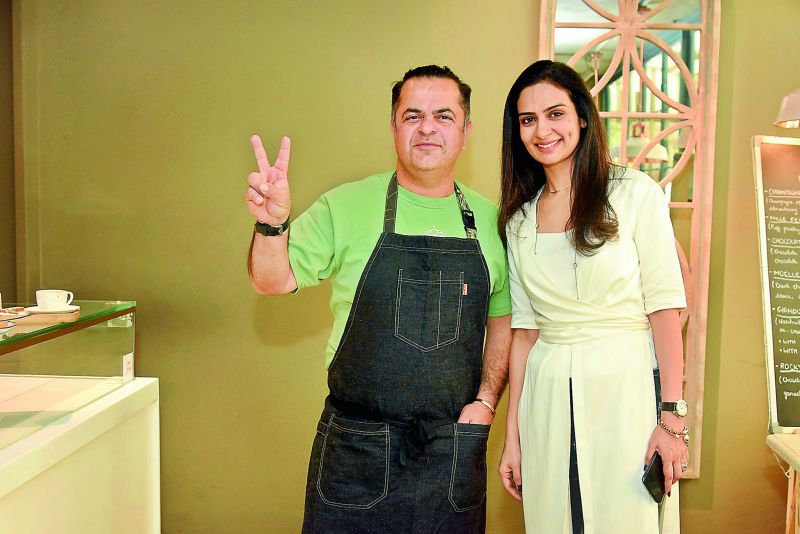 For the celebrity chef, it was his love for food which made him switch from commerce to hospitality. “My dad used to run a business and we worked for him through college. Eventually, however, I learnt that I wasn’t made for it — I was a thorough food enthusiast. So, my best friend’s mother, who was into hospitality, suggested that I join a catering college. My teachers in college helped me realise my potential as a chef. I made my way into the kitchen with my love for Italian cuisine, especially pasta, while the Lasagna Bolognese remains, till date, the sole driving factor that led me to my full-time career as a chef,” he said.

Elaborating on the various Indian and global food icons who have inspired him through the years, he said, “Among the Indian pioneers, I look up to the late Jiggs Kalra, Manjeet Gill, Ananda Solomon, Hemant Oberoi, and of course, Sanjeev Kapoor. Some of my favourite international chefs include the late Anthony Bourdain, and Thomas Keller, Daniel Humm, and Daniel Boulud. Mind you, though — there are gems hidden in the younger lot as well,” he revealed.

Vicky is looking forward to start his own heath food start-up called Hellogreen. At present, however, he wants to focus on doing pop-ups across India. His two impending releases include his book, titled Urban Desi, and web series, titled Vicky    — The Gastronaut.

Bonding over creativity
Vicky shares a rather special bond with his brother Dabboo Ratnani — the celebrity photographer. “While Dabboo was learning photography, I was working on cruise liners, so I’d end up bringing a variety of international fashion magazines back for him. I’m glad that he allowed me to do my bit for him. However, he prefers shooting people over vegetables,” he chuckles.

India’s gastronomic sojourn
Hitherto an author of two cookbooks, namely Vicky Goes Veg and Vicky Goes Nonveg, Vicky feels that the food community in India is going strong. “As Indians, we’re trying our best to do our best. It is indeed important to first learn the basic like stocks and sauces and to have good command over Indian cuisine as well for those who intend to pursue a career in the food industry. Learn, focus, practice, and then, unlearn. Yes, it is important to unlearn everything you learn,” he said.