DECCAN CHRONICLE. | POOJA PRABBHAN
Published Jan 6, 2018, 12:00 am IST
Updated Jan 6, 2018, 12:45 am IST
Road work and endless snarls are a way of life for the harassed Oorean, but this new trend of unicycles has found many believers.

City folk have ranted enough about the traffic snarls and pothole paranoia in Bengaluru. While the on-road nightmare isn’t simmering down anytime soon, there’s a breather around the corner — fuss-free electric unicycles are creating a buzz in namma ooru. Bengalureans went into a tizzy online, early this week after a unicycle video of Kamal Morjal, a youngster effortlessly manoeuvring though some of the most congested city roads sprouted. With little surprise, the video found instant curiosity and connect, making it viral. Moreover, the idea is not only what adolescents are toying with. The unicycle is in fact perceived as a bankable option to get from point A to B by many adults in the city. There are already 14 unicycles on city roads. But, how feasible is it? Are Ooru roads equipped enough to accommodate this eco-friendly mode of transport? We take a deeper look...

The millennial beast is here: “I am free of all waiting, and empowered with the independence that any personal mobility provides at a fraction of the cost, associated with fossil fuel-powered vehicles. It gives me flexibility to join a pedestrian path when I do not feel like riding, taking a cab, bus or train. Also, I am not polluting (air and noise both), saving a lot of money, and the sheer joy that I get to share with folks in town about this wonderful technology is incomparable,” begins Kamal Morjal, a freelance web developer, who also vouches for the vehicle’s mammoth efficiency. Infact, his viral video is prompting others as well. He adds, “I bought an Avenger 220 and I can safely say that this experience has been way more fulfilling than riding my bike.” 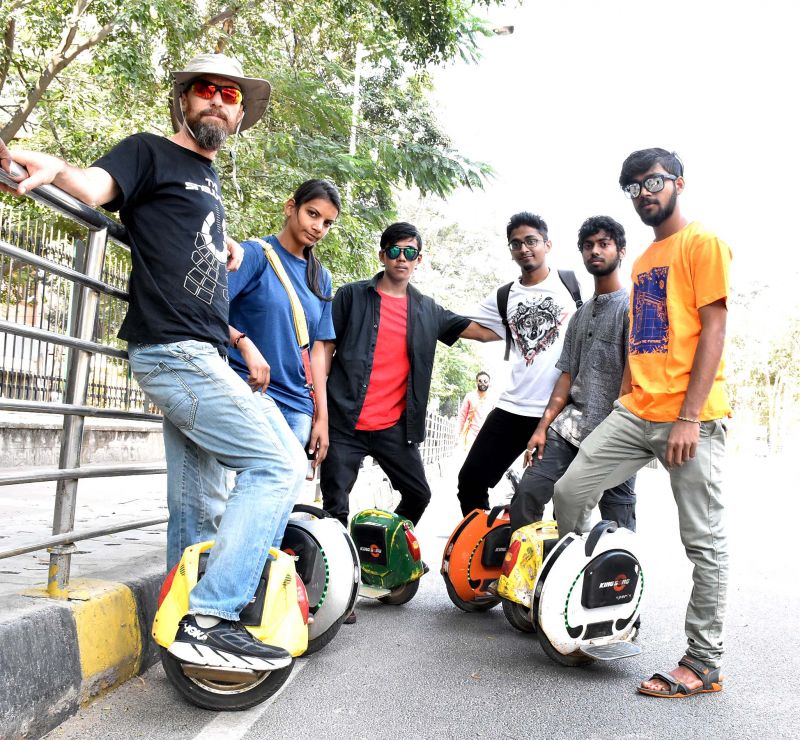 The buzz around electrical cycles have hit an all-time high with social media pages like Bangalore Electric Unicycle Club garnering attention on Facebook. City entrepreneur Pushp Bajaj who founded Unibalance, a venture that manufactures these electrical unicycles, believes this is the most organic approach to deal with the intense traffic woes in the city. “We have actually tested in peak traffic. My friend was driving a car from Sarjapur to MG Road and it took him two hours. And on a unicycle, it took 45 minutes. Because of its small frame, and its ability to manoeuvre through thick traffic, it is the need of hour. It solves last mile connectivity problems and it can also be used to listen to songs with its blue tooth facility.”

Yays more than Nays: Amidst all the gushing, concerns about safety and risks are also being addressed. It looks like the unicycle wins on that front too. Vinay Swaminathan, a city-based freelance evangelist enthuses, “It is an extremely durable device. The devices I have personally used have scoured farm terrain, forest terrain, crappy and good roads and not just in Bengaluru. It comes in handy on beaches, and on rainy days too. The addition of speakers and LEDs makes it a social tool as well. Such an awesome and effortless conversation starter. The companion app allows one to track distance covered, speed, time, graphs of power consumption and so much data, that you can really optimise the way you use it. From 12-15 km, it has sometimes given me 20 km as well. It feels like you’re flying a micro tilt forward, and you zoom along, and the slightest of leans backwards and you slow down smoothly. Traffic management and awareness are most important, though. If you can cross the road well, chances are you can learn how to ride a unicycle on potholed areas well, and quite quickly.” Addressing whether unicycles can wade through potholes, Rajat Kukreja, another uni-cylist and founder of Cuckoo Hostel, says, “It’s one of the easiest devices to navigate with. The amount of road space needed to travel on a unicycle is tiny. Maybe just 6 inches. Unless the whole road is a ditch, in which case I would stop and carry its mere 12.5 kilos across.”

Clearly, a majority of users feel it is a safe option. But, it’s not everyone’s cup of tea. Vinay Swaminathan reveals, “Uni-cycles are not for everyone. This is because it isn’t completely self-balancing. The left right balance is what you need to learn. And it’s tough. It’s subjective but in general, the learning curve is steeper on unicycles and uni-scooters than most modes of transport. Once you learn it, it’s extremely intuitive and effortless. In my eight months of riding, I have gotten into zero accidents, and it isn’t just skill or luck. But that isn’t necessarily the case for all riders.” A word of caution, perhaps?