Archa and Parvathy are lying down on top of the stage at Kalikotta Palace, Tripunithura, their heads held in place by Kalamandalam Radhakrishnan and RLV Pramod. The girls are putting on vesham to become Bhiman and Dharmaputhrar. The men are putting on make-up ahead of their Kathakali performance — Kalyanasougandikam, the first of the three stories that the bunch of women gathered at the palace was going to perform that Sunday.

They move around casually, comfortably, the palace being one venue they have always come to perform. They even keep some of their costumes and props in here. Three of the senior artistes — Radhika Ajayan, Premeela Vijayan, Parvathi Menon and Dr Haripriya Nampoothiri step into the next room — to tell the story of their group — the Vanitha Kathakali Sangham, Tripunithura, a women’s only group of Kathakali artistes that began in 1975.

When you are in a troupe for four decades, you not only belong, you observe. “How attitudes have changed, how life has… When we were young schoolgirls, our parents would trust us with Sathiyammayi — our manager Sathi Varma — to go with the troupe for long tours across the country,” says Radhika. She has been there since the group formed in 1975. Haripriya, who joined in 1998 after her marriage, says: “But today, the parents are so protective of their girls, they are afraid to send them out, away from where they could always keep an eye on them.” 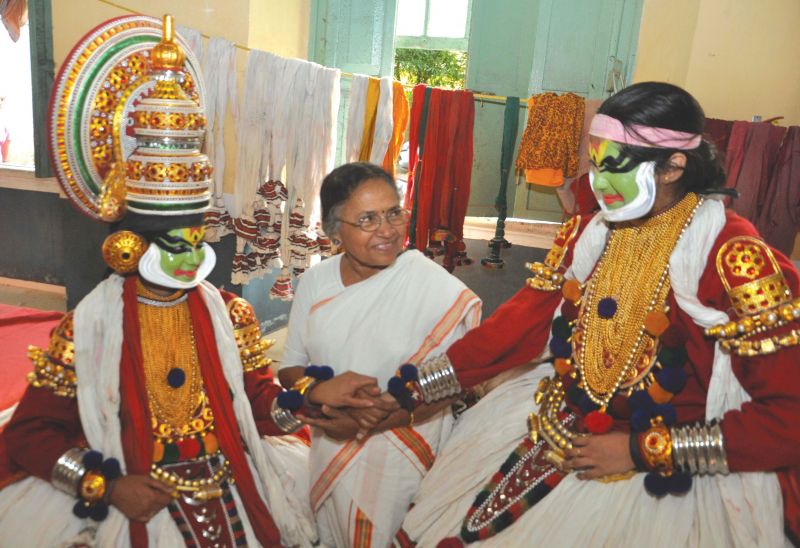 Chavara Parukutty Amma with young artistes of the Sangham

The troupe had formed as the fulfilment of a dream of legendary Kathakali artiste Kalamandalam Krishnan Nair. Radhika Varma and Shailaja Varma of the royal family had then won prizes at the youth festival for Kathakali. And the Cochin Royal Family had joined Krishnan Nair in his vision about a troupe for women dancers of Kathakali. There were the limitations of those times but one woman had made it all possible. Even now, every member — young and old — has sweet words to tell about Sathi Varma, the manager who would look after them all like a mother, scold them when she has to, share jokes and call them kuttikal.

“Once when we went to perform at the Pune Film Institute, she told the organisers about her kuttikal and they looked shocked to see a bunch of middle-aged women looking back at them. We were always her kuttikal,” laughs Radhika. Sathi took into her folds new generations of dancers every year. There were others too — Haridas Thampuran and Rajeshwari Thampuran, as managers. 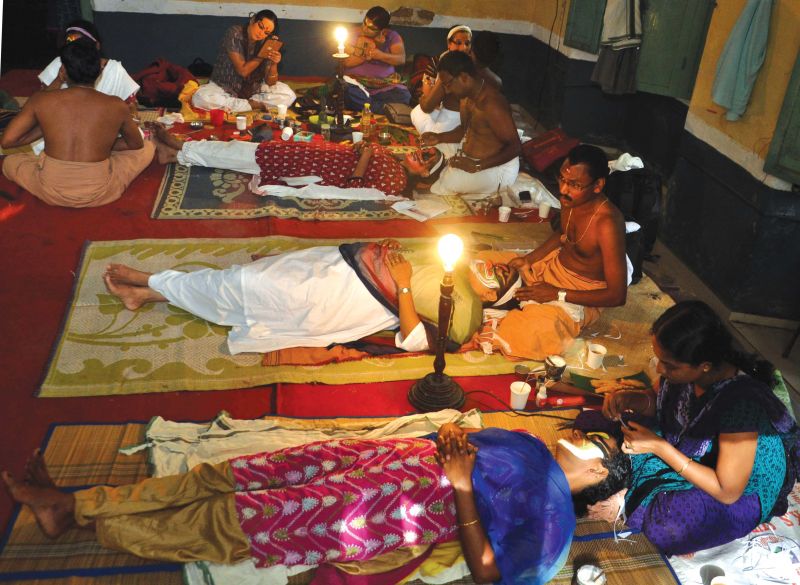 The group which started without a lot of ambition kept growing. They had their first trip to Mumbai the same year the Sangam was formed. They performed overnights at temples from 9 pm to 6 am. Being women had never been a barrier. They played tough male roles, Geetha Varma’s name coming out here as one of the prominent performers of characters like Balabhadran and Veerabhadran. “There is also Karthiyayani who’d play a loud Sugreevan.” Kottarakkara Ganga is another who has been playing thaadi vesham for a long time. Women handled the chenda too. 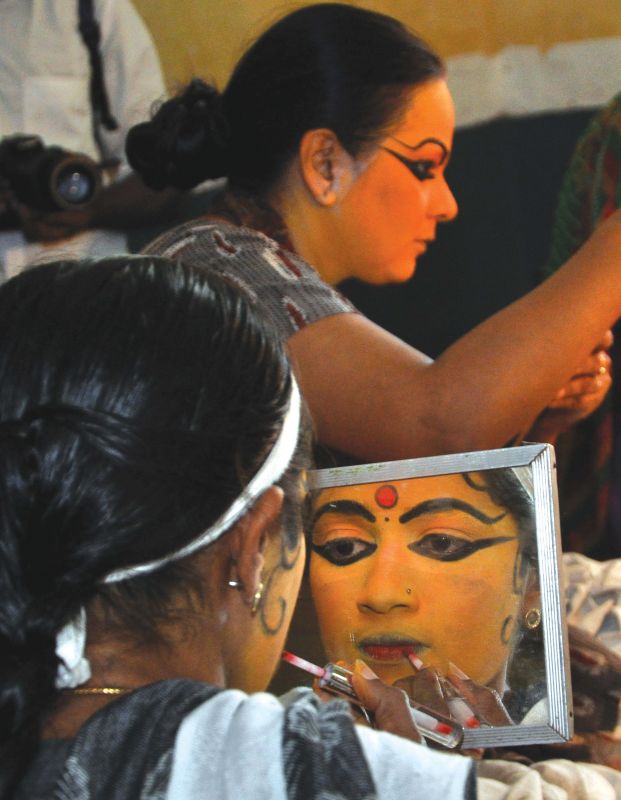 Artistes getting ready for the performance

“Only Maddalam, we couldn’t,” adds Premeela. They reached their peak in the years 1985-86. They got international stages — twice at New Jersey. Premeela narrates an interesting anecdote from one of these stages. “A sanyasi of the Chinmaya Mission was giving out mementoes to all our members. When my turn came, he fell on my feet for blessings, for I was dressed as Krishna!” That’s when the talk of younger members came and Parvathy, passing by, comments: “Tell we are the young ones.”

The camaraderie becomes obvious in these little remarks. Younger members too say they are at ease here. Without realising it, they do the tough task of playing two equally strenuous veshams at the same venue, one after another and surprising veteran male performers. “We even get questions from viewers if a particular performer was really a woman,” says Premeela. Subhadra, one of the younger members — doing her MCA now, says there were no fears joining this group of senior artistes. “They are motherly.”

Kottarakkara Bhadra, a senior member says, echoing most others in the group, that it is most comfortable to be in a women’s only group. “There comes our power - because there is absolutely no ego that you might face in a mixed group. We wouldn’t mind if the newest member played the most important character. We will adjust if someone couldn’t make it on time. It’s exactly like a family, young and old,” Radhika and Haripriya say.