A scouts hall near Vijayawada railway station has turned into a practice centre for children and youth to learn acting, thanks to the initiative of Vijayawada based theatre artist Dr Madala Madhusudhan Chowdary, also known as M.S. Chowdary.

Started a few years ago, the New Star Modern Theatre Arts Welfare Association is dedicated to training children and youth in the theatre arts, thus producing a new crop of actors. Apart from drama, they are also trained in folk songs and dance and Indian martial arts like Karra Samu, Kati Samu and Kung fu.

Concerned over the decline of drama as an art form, M.S. Chowdary took up the responsibility to restore it to its former glory and has so far trained as many as 4,500 young artists at his institution. Dr Chowdary has also trained nearly 5,000 students from different universities and colleges across both the Telugu states, many of whom have gone on to perform in drama competitions, films and Telugu TV serials like Jabardasth, Drama Juniors etc.

Interestingly, during the 90s, most drama companies only encouraged noted and aged performers while youth refrained from the stage, and even being a part of the audience too. 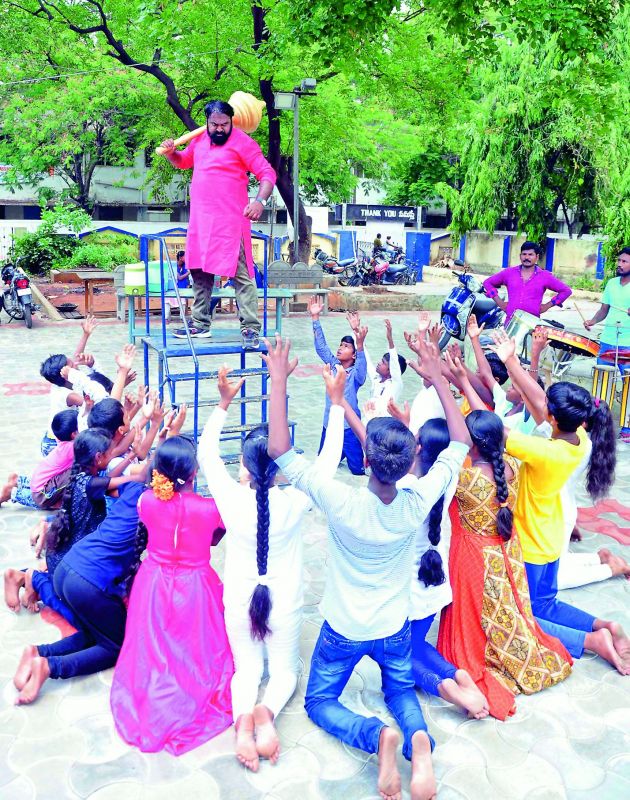 Dr M.S. Chowdary with his students.

Recalling his early days, Dr Chowdary says that New Star Modern Theatre Arts Welfare Association started off in 2000 with just six members, when he was a degree student and was writing dramas especially to attract the youth.

Apparently, his writings were rejected by the Nandi Jury for six consecutive years simply because he had youth in his team. It was only after he applied in another noted drama writer’s name that he and his team got entry into the Nandi competitions.

There has been no looking back since then. Till date, Dr Chowdary has individually bagged 15 Nandi Awards while his drama team has won nearly 60 Nandi Awards. He has also won 11 National Awards and an honorary Doctorate in drama from the Royal Academy of Global Peace University in California.

One of his students, noted young director R. Vasu states that drama is one of the most powerful arts across the globe, and that thanks to the drama training centre in Vijayawada, more youth are now attracted to the art form.

Another former student, JEE 3rd and EAMCET-2019 State 2nd rank holder Patarapalli Jagadish Kumar says that drama improves a person’s standing in society and their knowledge too. Jagadish, who has been acting since he was in class VI, credits drama for improving his memory and for getting state ranks.

BTech student Tamalapakula Kalyani says that convincing parents and friends about acting is a tough call. “But I always wanted to become a good drama artist. It is good for health and a great way to improve one’s knowledge,” she adds. A Class VII student from Vizag, Konatala Chandanasri states that she has been training in drama for the last three years and is proud to be a budding theatre artist. Likewise, a Class VII boy from Vijayawada, and a student of theatre arts and Indian martial arts, Kundurthi Likhith says that he wants to become a choreographer some day. “I have won three best performance awards for my action scenes in dramatic performances,” says the young lad proudly.

Meanwhile, Assistant Director and martial arts trainer at the institute, Patnala Phanindra Kumar says, “Drama feeds my family, and I have won the Nandi Award twice for lighting and decoration.”

The waist of the matter