A group that was started with a few fervent members now has close to 3000 members on Facebook and 1250 members on WhatsApp.

A group of ardent runners that sprints for a social cause every now and then, RunAddicts is a one-of-a-kind bunch. Their third annual run, which is set to take place on the 9th of June has the tagline educate a rural child’ and it includes 10k, 5k and 3k un-timed walk/run events.

Speaking of the group based in Rajarajeshwari Nagar, Sunil Bharadwaj, senior software engineer and avid runner says, “RunAddicts was formed in the year 2016. Mohan Devegowda, a fitness enthusiast used to run in RR Nagar every morning and ended up meeting other fitness enthusiasts who were running regularly. That’s when he thought of forming a fitness group which can help motivate each other and run regularly.” The distinctive bit about this group of runners is that they regularly take part in social activities and also run for cause. From stroke awareness to sapling plantation and repainting the walls in Turahalli, they’ve lent their support to various causes.

“In this time’s run, the funds collected as part of registration will be used to buy books and sports equipment for kids in rural areas. We’re aiming for a zero garbage and green event with washable utensils and composting all organic waste. Apart from local MP/MLA/Councilor, the event is expected to be attended by the who’s who in the Bengaluru running scene, national level athletes and prominent citizenry from RR Nagar,” reveals Sunil. Around 4000 participants are expected to pass through the beautiful neighborhood of RR Nagar and finishers will get a medal, certificate and breakfast. 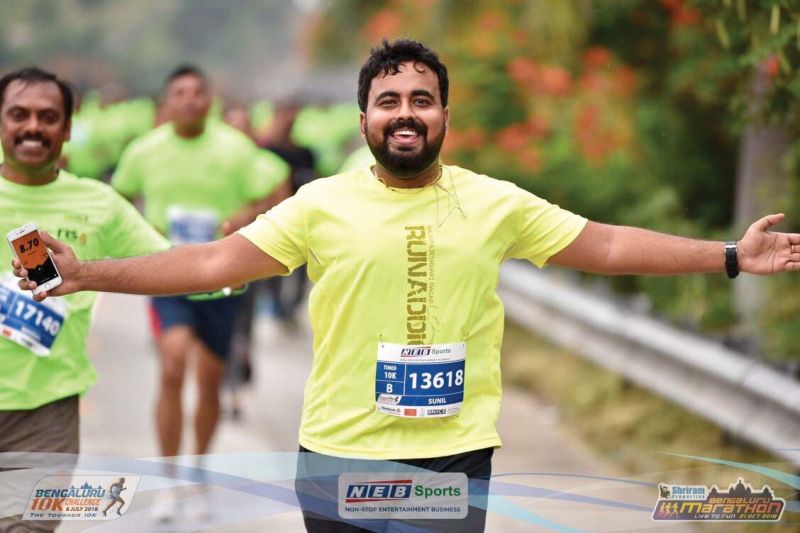 A group that was started with a few fervent members now has close to 3000 members on Facebook and 1250 members on WhatsApp. “We’ve produced many ultra-runners and triathletes. The focus of our group is to just motivate people towards fitness — we’ll always be a non-commercial organisation,” says Sunil whose first run was the 5k in 2017. “That is when I realized how unfit I had become due to my sedentary lifestyle and bad eating habits. Ever since I’ve joined the group and started running regularly, I’ve lost close to 10 kgs and I definitely feel fitter and more energetic. I have completed few half marathons and I aim at running a full marathon by the end of this year,” he smiles.

RunAddicts will kick off their third annual run from Balakrishna Rangamandira in Rajarajeshwari Nagar on June 9that 6 am. If you’re you geared up to sprint for a cause, you know exactly where to head to!