Behind the concrete jungle: Conversations with raconteur Donald Anderson

No 10 Serpentine Road stands desolate and ramshackle, waiting to be traded in for another block of apartment buildings. In 2014, its last tenant, an equally decrepit specimen, passed on old, poor and ill but taking with him the last vestiges of a proud, if somewhat bloodthirsty pocket of local history. Donald Anderson was the last of India's colonial hunters, men who were famed for their bravery back in the day when many a lone farmer fell prey to a man-eating tiger and condoned when development began to extract its price.

The sight that awaited Joshua Mathew, who would go on, nearly five years later, to write a book on Donald Anderson, was a far cry from stories he had grown up reading - Donald's father, Kenneth Anderson, colloquially known as the 'Corbett of the South', was one of India's most prolific hunters and storytellers. By 2006, when their paths first crossed, however, Donald was reduced to crumbling, one-room home, to loneliness and penury. Or so they thought. One night, as they drove through Bandipur, they noticed, in the glare of a coming car’s headlights, a leopard dragging a deer off into the bushes. The next thing they knew, a lanky figure strode, cane in hand, into the overgrowth, to bring the deer back out. “He couldn’t see all the way there but he was utterly fearless,” says Joshua. “On another trip, he chased a tiger on foot.” 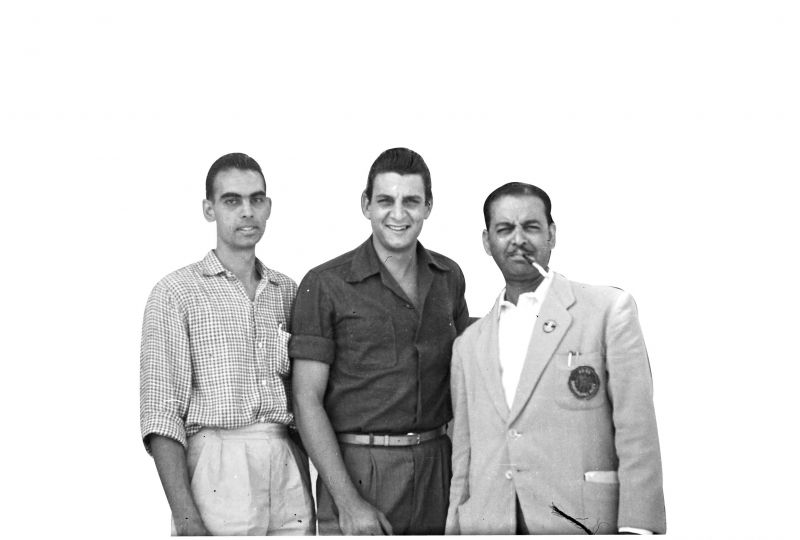 Donald with Sundar Raj outside guncraft

Life was very different for the Anderson family back in the 1930s, when Donald Anderson was born into the sprawling Prospect House on Sydney Road. Kasturba Road, as it is known today, bears very little testament to its unique claim to history. Here, sloth bears, jaguars, panthers and apes moved freely, a formidable goose: the self-appointed guardian who was not averse to violent reprimand and a sloth bear, the darling of the household, made up a thrilling menagerie. The 12-acre property beside the park was presented to Kenneth Anderson’s father by Sir Mark Cubbon. “He continued to live there after he retired from service,” says Joshua. After Independence, when Donald attempted to sell his ancestral home, he found that gifts between Englishmen were no longer valid. He was, however, paid the cost of the building.

In 2006, Joshua set out to find Donald, the son of Kenneth Anderson, his favourite author. "I wanted to get some tidbits on Kenneth's life, see his guns and trophies, maybe." Donald, they had heard, lived alone in Richmond Town, long since retired from his job at Binny Mills where he had worked for over two decades. He was not pleased to see them. "He made a speech about being an old man, told us to leave him alone and so on," says Joshua. They didn't leave, however, hanging around the street every chance they got and talking to Donald's 'friends', who told them that their subject perhaps wasn't worth the trouble.

It was when his health failed him that things began to change. "We heard Don was in hospital and a friend of mine went down to the nursing home and paid the bill." Donald lived his life on the brink, making do with whatever friends and neighbours brought his way. "When that happened, he decided to let our friend Jayaraman in." Jayaraman would go, armed with questions and a recorder in his pocket. "When he came back, we would huddle around and listen to it, that was the thrill." Slowly, they began to inch their way closer to Donald himself. "His health was failing and everytime he fell ill, he would let us in a little further."

Finally, they found themselves sitting out on the portico, where they were offered, a cement slab on which to make themselves comfortable. Donald would squat too, back against the peeling walls of the house and tell his stories in his Anglo-Indian accent. Evenings were spent swapping hunting tales and Joshua and his friend were soon allowed to go along. “The idea for a book happened only in 2012 and Donald said yes immediately. It wasn’t out of any friendship for me, he could feel  his world coming down around him and he was desperate. He took to the idea of writing a book, like his father used to do.”

The hum of the 1956 Norton Denominator, “an absolute dream machine,” as Donald puts it, invariably sounded a moment of excitement for passers-by. Donald Anderson, widely celebrated for his lean good-looks, would sail down M.G. Road, a trophy draped across the handlebars and a pretty girl riding pillion. “The place would come to a standstill to watch him ride down M.G. Road and all the way back,” says Joshua. “Of course, the girl would change every week.” The eternal bachelor, Donald speaks with candour of his many dalliances, the mere idea of a “marriage” terrified him. It was a decision he would come to regret, for he writes, at especially melancholic junctures in his narrative, of the loneliness that came as a consequence. “The introspective moments would happen if he wasn’t feeling very well,” Joshua remarks.

Theirs is a controversial history, but one that lives on, in the bylanes of the Cantonment, where younger generations of British families grew up speaking that fluid mix of English and Tamil peculiar only to them. Koshy’s, Lakeview (back when it actually included the view of a lake), M.G. Road and Bishop Cotton’s – cricket matches, boxing bouts and stealing mangoes from the neighbours, to a Bengalurean, this is a trip back to a city that now remains only in fast disappearing fragments. Here, forest and urban-dwellings were often locked in deadly conflict, panther-sightings and tiger-deaths were a matter of course. And it’s been arduous journey for the author, who did his bit despite many words of caution. A celebrated historian, upon being asked for advice, said at once the idea wouldn’t work, worth an attempt only as a labour of love.

Donald finds himself a seemingly unlikely band of admirers in conservationists like Ullas Karanth, however. The infamy of their violent hobby went on to overwhelm the gifted environmental talents of the Anderson family. “Retrospection will find many faults… Most people will castigate the actions of the hunters from the British Raj…,” writes ace wildlife photographer T.N.A Perumal, who first learned his way about the jungles guided by Don’s instinct. “My own fascination for the jungles was nourished by Kenneth Anderson’s hunting tales,” writes Karanth, who would spend hours listening to Kenneth speak.

Hunting is a politically squeamish subject, Joshua admits. Still, the book is a tribute to Bengaluru’s rich heritage, from its diverse social fabric to the richness of its wildlife. If hunting doesn’t appeal to you, don’t fret: the book is a treasure trove of local history, painstakingly researched and well-written, replete with all the little nuances and quirks that every long-time resident will remember fondly, hunting or not