Some of the sculptures on display at the gallery

As a foundation driving to provide specially abled children the facility they need to thrive in society, Jai Vakeel Foundation, Mumbai is celebrating its 75th year, and to mark the milestone a fundraiser titled Champions of Change is being organised. Curated by prominent sculptor Arzan Khatambatta, the fundraiser will showcase resin sculptures made by Arzan and painted by well-known names from the art industry, including Hyderabad-based Fawad Tamkanat.

Being Arzan’s curatorial debut, this fundraiser is special in its own way. “I have taken part in fundraisers which others have organised but this is the first time I’m curating. I go to the school quite often because it’s close to my studio as well.

After knowing their work and realising the super stuff they are doing, I decided to take this head-on,” says Arzan who has been working on this project for the last one year.

A humble fundraiser, which was supposed to have only 25 sculptures, grew three folds, thanks to the enthusiastic donors who are in awe of the foundation’s work. “For the last few years I have made a conscious effort to display my work at best in the major galleries around the country and abroad for exhibitions. Seeing my work at those exhibitions, the organiser and the show’s curator Arzan Khatambatta felt that I can be a part of the 75 artist team to display their artwork. 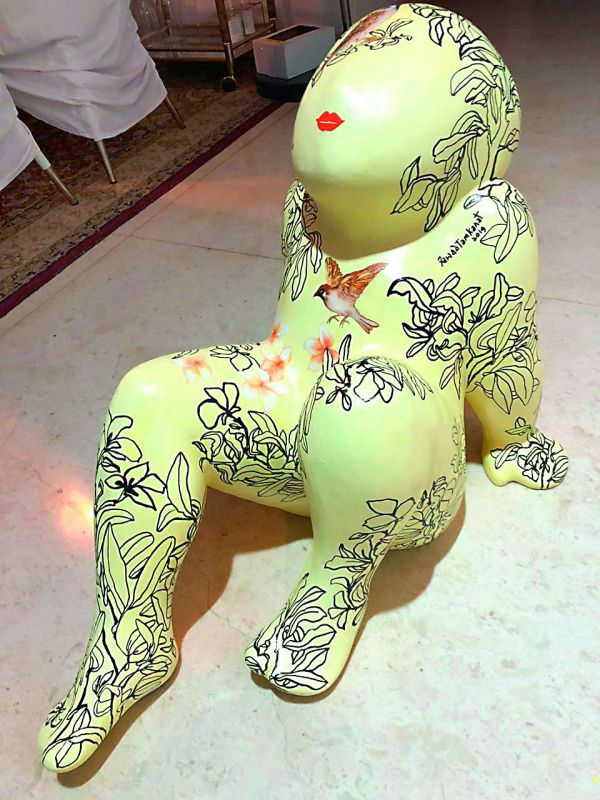 Artwork by Fawad Tamkanat on display

Interestingly, I am the only one from Hyderabad to be a part of the exhibition. They called me three months ago and told about the initiative of showcasing resin sculptures made by Arzan and painted by well-known names from the art fraternity to raise funds for the specially-abled children supported by the organization,” says Fawad Tamkanat, considered as one of the most exceptional Indian artists.

Arzan reminiscence, “The first meeting that I had with them, it was in August 2018, so basically, at that time, we started with a very comfortable number of 25 pieces and 25 artists. And then, because of their work the kind of response they got from their donors, we went to 50 pieces then 75 and more. It’s become a mega show from something we planned on a very small basis only because of the kind of work they do.” The curator was excited to get his fellow artist involved in this project and was humbled by their response, he adds, “I was more than happy calling all the artists and there were so many of them willing to contribute towards it. Now, we have a wonderful collection at Tao art gallery. I’m overwhelmed to see all the pieces together.”

Shedding light on the name of the fundraiser, Arzan explains that there are many champions involved in bringing about a change. He says, “I would say the champions are the teachers themselves, the donors are the champions as well because, without them, this would not have been possible. Even my fellow artists, who have poured out their hearts. These are all the champions who have come together to bring about a change and that’s why it’s called Champions of Change.”

Known for his metal sculptures, Arzan decided to go for resin for this particular show because it was the only medium that was ideal, given the magnitude of the show. And as for the design, he wanted to bring out the innocence he sees in the students at the school, keeping in mind the buyer’s aesthetic. “I wanted to show innocence, something that people would find cute and would not hesitate to keep in their homes. The sculpture can be on the floor, by the side of the sofa or you can put it on a table. So the entire design is very comfortable to live with,” says the sculptor.

Painted by prominent artists from all over the country and the exhibition includes works of Manu Parekh, Jayasri Burman, Paresh Maity, Seema Kohli, Jaideep Mehrotra, and Bose Krishnamachari. Apart from established artists, Arzan made it a point to give an opportunity to young artists as well. “First, when it was 25, we had only very big names because you need big names for the fundraiser, but then when the number became 75, I requested Jai Vakeel to let me call some junior artists who never exhibited before and they’ve done such fabulous work.

These are artists who have never worked on 3D before have painted pieces which have come out so well,” adds the curator with a smile. The sculptor who has been associated with the foundation for 15 years is excited to be a part of this milestone. “I go to the school and every time I come out, I am so humbled by the kind of work they have done and you see their smiling faces, I always come out very happy. And I am so glad that I could help them collect this amount. I am extremely happy because I know they’ll use it in the right way and it’ll be very useful for them. I’m extremely excited to be a part of this.”

— With inputs from Reshmi Chakravorty