Collecting food from weddings into containers

When Amit Kalla, a poet and painter from Jodhpur, decided to get hitched, he made sure that his wedding ceremony contributed very minimally to environmental waste. “I got married during the day so that we wouldn’t have to install lights and fans and waste electricity. Our invite was the size of a visiting card and guests were served only what they could eat,” says Amit who apparently got the idea of a zero-waste wedding from his college days at Jawaharlal Nehru University in Delhi. “Marriage is a process, not some sort of achievement that we need to spend a lot. We only collected books because we both love reading,” he adds. While Amit may be among the few who are environmentally conscious, most Indian weddings still contribute significantly to food and other waste. Case in point: 4000 kilos of garbage that was left behind at a pristine hill station in Uttarakhand after a grand wedding ceremony of two sons of South Africa-based businessmen. While the lavish wedding came under the scanner for its show of obnoxious opulence, there are no concrete statistics on how much of reusable waste weddings across the country generates. And some are trying to put this waste to good use. 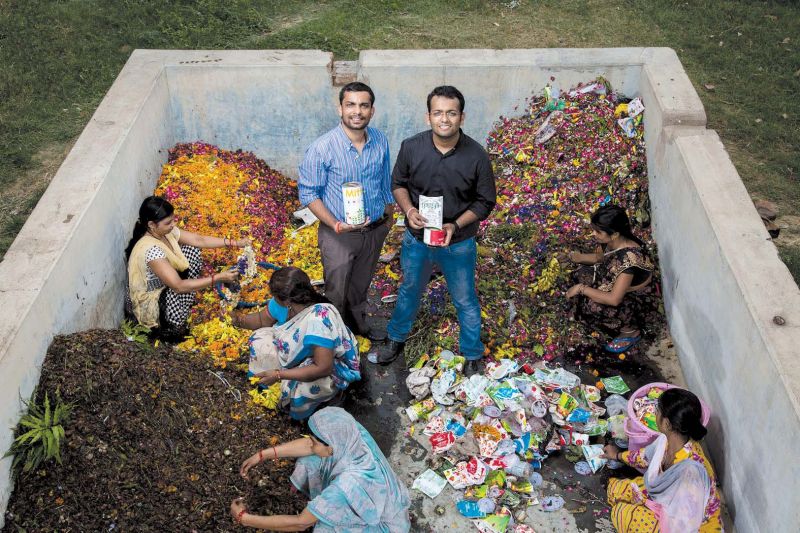 Meals with Love
Srishti Jain, the co-founder of Feeding India has served over 20 million people in the last five years with the food collected from various hi-profile weddings across 75 cities in India. “About one-fifth of the food served at weddings and social gatherings is discarded. At the same time, thousands of Indians sleep hungry every night. We have been collecting food for a long time. We wanted to be very specific and wanted to ensure that every wedding season we target the maximum number of events,” says Srishti, whose NGO has also collected food from comedian Kapil Sharma’s wedding receptions in Mumbai, Ambala and Amritsar. Talking about the process, she explains that they have a dedicated team, which only works for weddings, and there are proper checks involved. “We do proper quality checks before collecting food and distributing the food. We have temperature control vans and hygienic containers,” she reveals. The main beneficiaries of the food include children, women, elderly and specially-abled people. And the food is given as an incentive for beneficiaries to come to school or skill development centres. “This will get them out of the poverty cycle in the long-run. If we distribute that on street then it’s more like begging, and we intend to give food as a motivation,” she informs. With her towering initiative, Srishti has collected food from thousands of weddings and assured that she contributes to society and couples to have a minimal waste wedding day.

Gifting fragrances
Apart from religious ceremonies and temples, weddings produce a lot of flower waste. These discarded petals go to waterways and harm marine life and the environment. 29-year-old Ankit Agarwal from Kanpur has the solution for it. From last one and a half year through his initiative HelpUsGreen, Ankit has been collecting waste flowers from weddings across India and handcrafts them into charcoal-free incense sticks, organic vermicompost and biodegradable packaging material through flowercycling technology. “We generally collect seven tons of flowers from all the religious places, but we were contacted by a family from Kolkata in 2017 to collect their flowers and reuse them. We gave them our ready incenses and they gave us almost 500 kg waste flowers,” reveals Ankit, who has also used waste flowers from Rajnikanth’s daughter Soundarya’s wedding in February 2019. So far, Ankit has catered more than 15 weddings and according to him, he connects only with clients who are eco-conscious. The incenses are given as a gift to all the guests as a token of memory. “They write inside the box that all the flowers used in this wedding will be repurposed. We use pure essential oils to make it. All products are handmade by women workers and it is comfortable to work with people who are environment-friendly,” he says.

Utensils for change
Wedding waste is not restricted to food and flowers. Plastic contribute to environmental waste in a big way. Mumbai based Shahid Chaudhary, who owns a plastic recycling company JRS Recycling Solutions, was surprised to see tons of plastic near his locality after a neighbourhood wedding ceremony. It was then he decided to collect waste plastic utensils from most of the city’s five-star hotels hosting wedding ceremonies. “The plastic that we collect is not dirty, it is fresh and can be used again. We collect all the plates, water jugs, glasses and other plastic material after the wedding is over,” says 32-year-old Shahid.