Different strokes and a continuum

Anjaneyulu G’s works give iconic status to mundane objects around us, making one sit up and take keen notice.

An art show titled ‘Space-Time Continuum’ is on display featuring works of four impressive artists — Sachin Jaltare, Ramesh Gorjala, Bratin Khan and Anjaneyulu G — who have, for decades, marked their signature styles of paintings in the industry, sharing a congeneric subject matter. The four artists have come together to showcase diverse works inspired by the mundane and mythology.

Sachin Jaltare’s exhibited works combine figurative and abstract elements to entwine an enthralling narrative that is both authentically Indian and contemporary. The visual vocabulary is minimalistic and geometrical. Speaking about the exhibition, the artist says, “It’s like a dance and rhythm of form and the formless. The more I started thinking about Shiva, spirituality and symbolism, the more I found myself moving towards abstracts.” 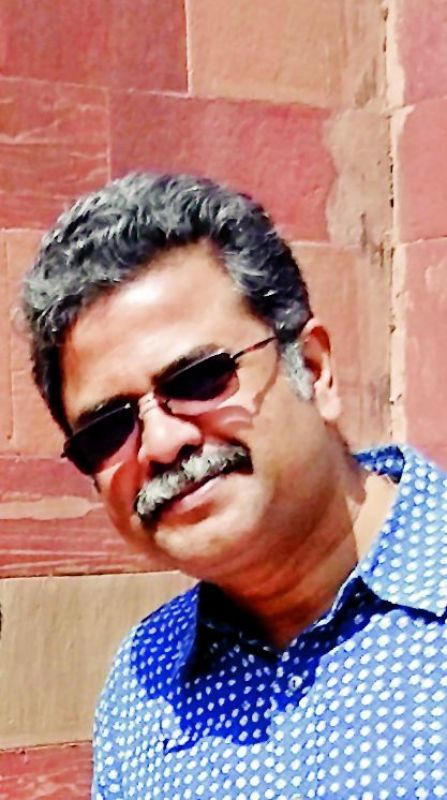 Bratin Khan is greatly influenced by the Bengal school of art and Rajasthani miniature paintings.

Bratin Khan, another of the eminent artists whose works are on display, is greatly influenced by the Bengal school of art and Rajasthani miniature paintings. And the influences are evident in his brushstrokes and his handling of colour. The subjects he uses mostly belong to Indian mythology, religion and folklore.

“My colour palette is inspired by the earth — the flora and fauna are my dearest elements. However, unlike a dance performance or a drama, a painting captures only a single moment of a particular scene, so one can’t paint the whole life of an enlightened person such as Buddha, Jesus or Krishna in just one painting,” says Bratin, a graduate from Visva Bharati University in Shantiniketan, West Bengal.

Quite like Bratin, Ramesh Gorjala takes inspiration from mythology but gives the paintings his own spin. The artist portrays Indian gods and goddesses using Kalamkari techniques, with rich gold, red and green colour lending vibrancy to his canvas. With exquisite attention to detail and intricate designs, his paintings imbibe a traditional and spiritual feel. Anjaneyulu G’s works give iconic status to mundane objects around us, making one sit up and take keen notice.

Curated by G. Vignesh, the exhibition is on till 20 December.