On the dot, the walk started at 7 am near the Purana Pul Darwaza.

On the dot, the walk started at 7 am near the Purana Pul Darwaza.  Although Hyderabad city had several darwazas, there are only two left now and the walk started at one. From the darwaza, Sirisha Indukuri took us to visit a Shiva temple from whose precincts we could get very close to the banks of the Musi river, from where the flood had started to spread.  Standing next to the tall Purana Pul (Old Bridge), one wondered how the affected people felt when water rose.

Next Sirisha took us to climb the Purana Pul Darwaza — at the top you got a splendid view but to imagine that you were ensconced on it at a time when the rapidly rising level of water threatened to engulf you — now that was a scary thought.  Deftly going from images and maps to her own descriptions of the flood, Sirisha painted a dismal picture and almost brought the flood back to life.
Descending from the darwaza, we walked the entire length of the Purana Pul.

Where the bridge ends, we again got to witness a marker — this time one of the famed “HFL 28th Sep 1908” boards.  (For those who don’t know, when the flood waters had receded, the Nizam’s government marked the height of the flood level, with stones that showed the point to which the waters rose).  Although Sirisha told us the board was visible, it took a few seconds before we could find it. It was on a wall — the outer wall of the Miyan Mishk mosque. Somehow, the stone has been whitewashed and therefore, not easily visible but still, the text is unmistakably there. 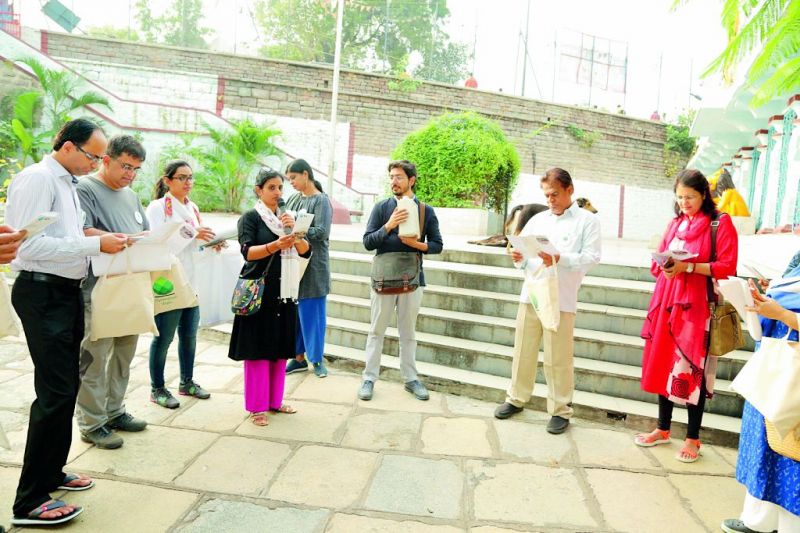 A briefing session before going ahead with the walk.

A short tour of the masjid then followed, with a climb to the roof of the mosque.  The strange sight of the city that morning, coming to life in a million sounds — tooting horns, police whistles, the crackle on the walkie-talkies, and the sheer mass of humanity, all emerging from their slumber and trying to get on with their day — and yet, conscious of the day and the time — our thoughts kept going back to the flood.

We visited a sarai next door — a sort of a stop for travellers — which has now been converted into a hostel for students from the outlying areas of the state.
Did anyone survive the flood? Yes, a large number did, and some of them were lucky to be entangled in the branches of a tree that now stands in the campus of the Osmania Hospital. A few others, such as the Urdu poet Amjad, who lost his entire family — mother, daughter and wife — in the flood, wrote soul-stirring verse of the tragedy.

What else happened that can be remembered and recalled?  Here, Sirisha turned part-raconteur and part cartographer. Using the Munn map, she brought us to a visual recognition of the gravity of the flood. She then referred to the much-reported lore of the 6th Nizam —Mahbub Ali Pasha — who donned the sacred thread and performed arathi to the river goddess, a feat which no doubt enhanced his position — for, it is said, that it was just at that moment that the river started receding.

In the aftermath of the flood, the Nizam then obtained the services of that formidable engineer Sir Mokshagundam Vishweshwarayya and, following his report, the reservoirs of Himayatsagar and Osmansagar were built —eliminating any further fear of a flood.

Having been on several heritage walks and holding several walks myself I am in complete admiration of what Sirisha Indukuri achieved on this one — she brought the flood to life! There was one moment, when we had stopped to get tea after the walk was over when Sirisha had said that she was afraid that it would rain on the day of the walk and I somehow thought rain would be appropriate for commemorating such a day but we had bright sunshine throughout and we went on our way, with deep sympathy for those over a century ago who lost their lives to the fury of a river.