Memories of the flood

Afzal Gunj gate is the only visible marker of the submerged bridge.

Last Friday was the 110th anniversary of the Great Musi Flood of 1908. To
commemorate the event, the Krishnakriti Foundation organised a day-long event.

The vastly spread out original photographs that cover almost all the walls of the gallery are a part of the event. Presently an almost dried up river, Musi witnessed a traumatic flood as an affect of torrential rains caused by a cyclonic storm over the Bay of Bengal. The river rose almost 20-feet high, and overspread to some of the most populated settlements that were located near its banks. The exhibition of photographs on the 1908 flood includes a selection of rare archival images produced by W. R. Puplikc and Co. between 1908-09, from the collection of Kalakriti Archives.

To the Hyderabadi’s these images unveil the intensity of the destruction that was caused due to the flood, after which the city was left adversely affected and ruined. It is amazing to know and also discover from the photographs the fact that during such trying times the Hyderabadi’s stood together and supported each other wholeheartedly. Temporary shelters for the homeless were built in Purani Haveli, Panch Mahalla Palace, Julukhana Shahi, Asad Bagh and Fateh maidan. Remarkably outstanding support was extended by H.H. Nawab Mir Mahbub Ali Khan Bahadur, Asaf Jah VI, Nizam of Hyderabad for the affected people. He benevolently opened the gates of his palace, the Purani Haveli, to provide shelter to the homeless and heartbroken people. The most affected families were taken care of with a unified effort that proved the fact that the city’s true strength lies in its resilience. 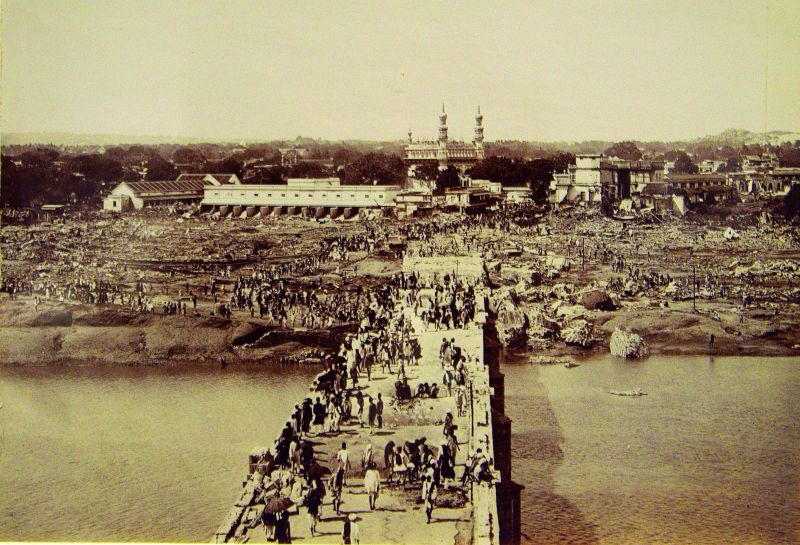 Relief camps were set up in an area flattened by the floods between the river bank and Afzal Gunj Hospital.

Although the memory of the flood has faded with time yet ones heart reaches out to the unknown group of people who were affected during the natural calamity. The rare and exquisite photographs bring forth the details of the event from close quarters, from varied stances and in flawlessly clear picture quality. Altogether, the series of original photographs unveil a novel way of knowing one’s own city by getting connected to one of its historical excerpts that has played an important role in shaping and strengthening the city’s entity.