When balconies and backyards turn green

The concept of urban farming is a hit with today’s generation, as many youngsters are tapping into this trend to bring about a sense of food justice into their everyday lives

‘This millennial quit his high-paying job… to start a farm!’ Clickbait as they may be, there’s no denying that the phenomenon of urban farming has well and truly captured the fancy of the Gen Y today. Several young professionals find small-scale agriculture an amateur interest or in many cases, even an alternate career option. From judiciously-researched plots of land to terraces and backyards, these social entrepreneurs are leaving no stone unturned (literally!) to ensure local agriculture becomes an intrinsic part of their lives.

Growing awareness on healthy eating has certainly aided in people taking urban farming more seriously. Support from multiple organisations has also helped the general public overcome certain limitations — space, for instance, is no more an issue (certain herbs can now be grown in a 10-inch pot) and some enterprises also help people set up base in their homes.

Urban farms could be set up for various reasons — as a hobby, for education or training, or for profit. For many, it’s a method to preserve traditional food philosophy, while for others, it provides a sense of ‘food justice’ — which is exercising their right to grow, sell and improve access to culturally-appropriate food, which is grown locally and is affordable.

Rise of urban farming
Priyanka Amar Shah, the founder of Mumbai-based iKheti, a community enterprise that promotes sustainable urban farming, feels that the concept of farming in cities has been in practice for many years — but only in an informal manner.

“It’s very pleasing to see urban farming being considered more than just a hobby now. This activity can be a social enterprise — and even provide employment opportunities,” says Priyanka.

Maddy’s stint with urban farming
Actors aren’t far away either, with several converting part of their balconies into terrace gardens. In an earlier interview with us, Madhavan, who grows his own vegetables at his house, said, “Saala Khadoos was taking a long time to finish, so I started my own kitchen garden to keep myself occupied. Now, I have enough vegetables to feed me for at least five days in a week. Since you are growing your own produce, you know what goes in there. 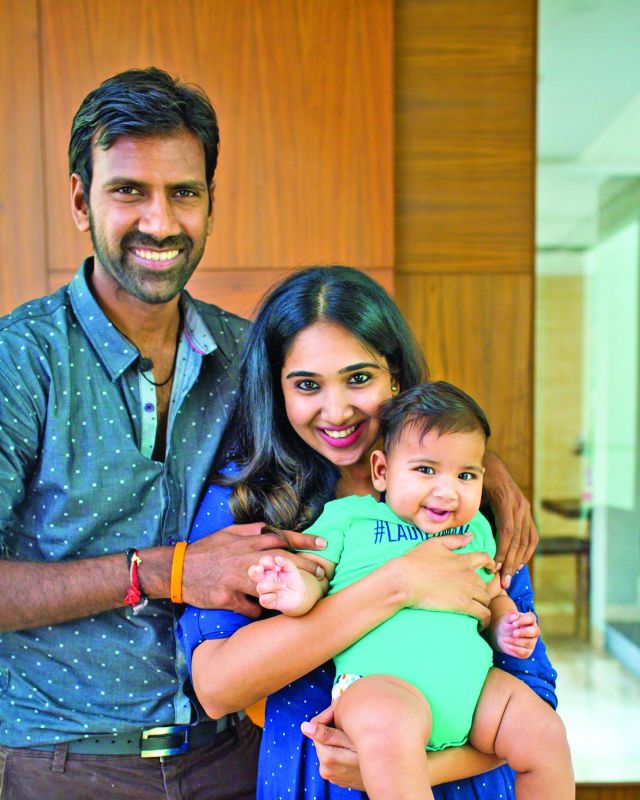 Lakshmipathy Balaji with her family

“People have never been so concerned about environmental issues earlier — it’s affecting all of us and the nature as well,” adds Priyanka. 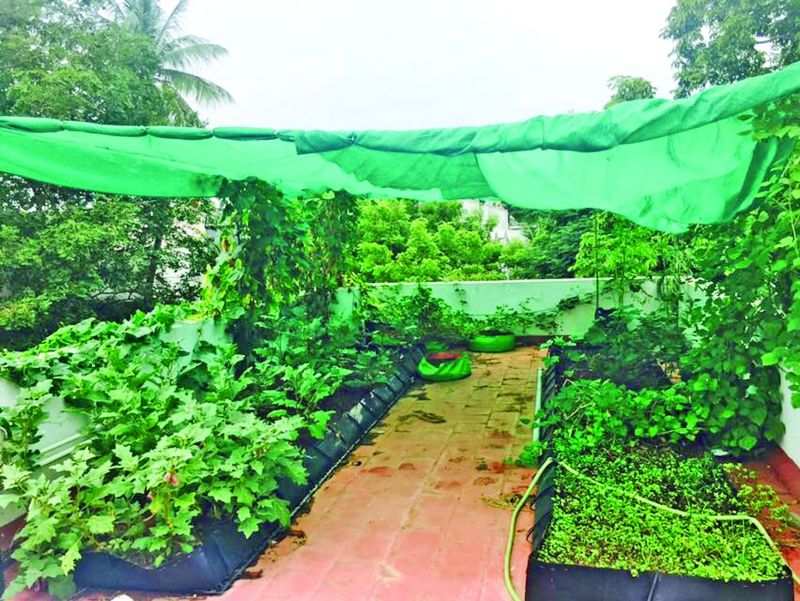 The desire to eat healthy
Priya Thalur Balaji, wife of former international cricketer Lakshmipathy Balaji, says that she was inspired to take up urban farming so that her family could eat healthy.

“When I thought of feeding solids to my son for the first time, I was very particular that I give him healthy vegetables, but I wasn’t sure how hygienic the ones we get in the markets are. So I started sowing seeds for vegetables such as spinach, tomatoes and more. Right now, I have brinjal, corn, ginger mint, coriander — and vegetables for daily use like tomatoes, snake guard, bottle guard, drumstick and I have just sowed basil.”

Archana Stalin, founder of myHarvest, a Chennai-based initiative, which encourages people to grow what they eat, says,  “Unlike earlier, people have become extra-conscious about their health. It has become an utmost priority now and the result is a major upsurge in the organic food industry. More people have switched to farming, rather than relying on the ‘labeled’ organic vegetables from the market. That’s how there is a boom in organic farming. Parents want to grow veggies and feed their kids home-grown, pesticide-free food. Parents also want their kids to get exposed to farming at a younger age. It’s a good sign that shows people’s attitude towards farming is changing.” 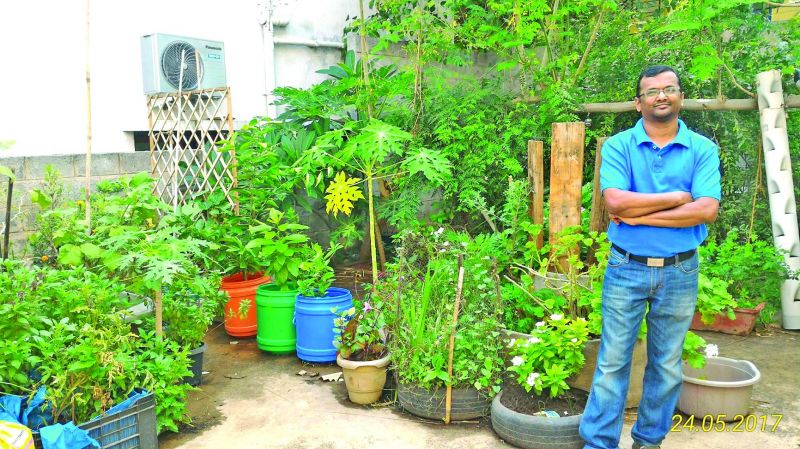 Ideal crops to cultivate
Though it is one’s own choice, there are certain factors to keep in mind while indulging in urban farming.

Priyanka advises first-time gardeners to not directly jump to vegetables — “Because it takes a longer time to grow. So we always suggest people to start with herbs — like lemon grass, curry patta, ajwain etc. because these have health benefits and are also used in houses every day. With people now interested in cuisines like Italian, continental etc., one can also grow Italian basil, oregano, celery; the best part about herbs is that they’re also available as saplings rather than just as seeds. Once you’re used to these, you can then move on to vegetables.” She adds, “I don’t feel space is an issue anymore; right now, in Mumbai for instance, there a lot of grills in houses — grill planters, railing planters are available at many places. The herbs that I’m talking about don’t even require that much space — you can easily grow them in a 10-inch pot.” 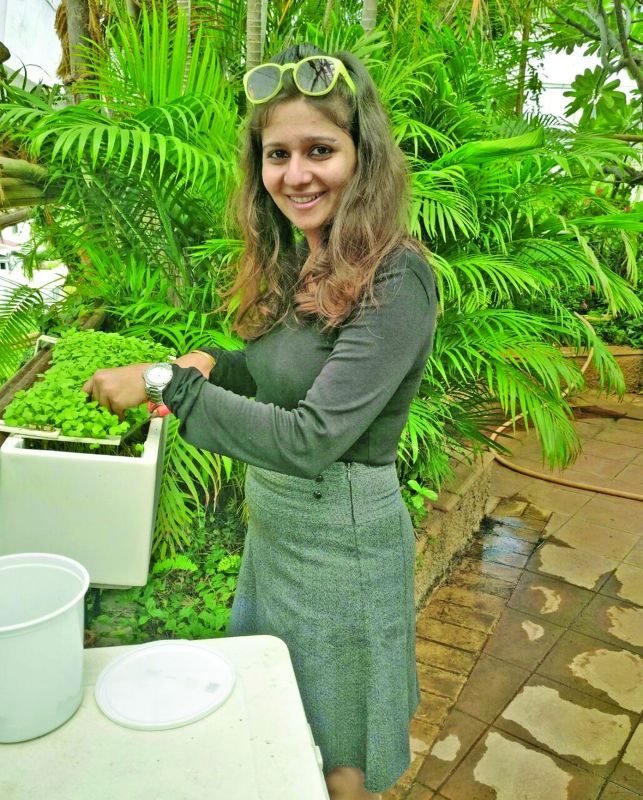 Eldho Pachilakkadan, a restaurateur from Kochi, believes only in raw diet and fruit diet. In order to meet his particular diet needs, he set up a 40-acre farm in Idukki and grows about 200 varieties of fruits and vegetables. What are the ideal fruit trees to grow in cities, we ask him?

The 38-year-old says, “I understand there are many limitations, but I feel people can at least grow four trees at their homes. I feel banana and papaya are the ideal ones. My advice for people is that they should start with spinach — it’s easier to grow and it’s very nutritious. But I think tomatoes, ladies finger and brinjal are the three veggies that people love to plant,” Archana claims.

On the other hand, Priya says that one should be focusing on cultivating crops that are needed on a daily basis — “For people, who have a balcony or terrace space, it’s easy to grow basic essentials like spinach, coriander and ginger mint — these are something that we use on a everyday basis.”

Social media to the rescue
The active online community on social media as well ensures that more and more beginners enter the field every year. For instance, Bengaluru-based techie, Srikant Kapungati, considers himself a mentor of sorts on a Facebook group ‘Organic Terrace Gardening’ where he routinely guides novices in the field on the dos and don’ts of the hobby/ alternate career. Srikant himself got into the habit less than four years ago, quite by accident.

“I have a weird reason for getting into organic farming; I wanted to do something with the terrace space at my house, and the idea of a garden somehow came to mind!” says Srikant.

A couple of years later, he really wanted to make sure other aspirants across India wouldn’t have to go through random websites or purchase gardening books when setting up their first OTG — “So I wrote a series of blog posts, explaining the basic equipment and facilities needed for a first project, from containers to seeds and composting at home, and so on. Also, it’s important that newbies experiment and eventually find their own niche; find what they are good at growing.”

Farming can be therapeutic
“The practice is very therapeutic for me in one way — while handling the baby, I needed time for myself and gardening is now helping me to be calm. I started a year-and-a-half ago, but I’ve not even lost a bit of interest — everyday, every vegetable is teaching me something new!” shares Priya.

Time constraints are a many, but Srikant ensures he gets his fill of gardening every morning before he rushes to work — “It can be a real stress-buster, but there are people who take it very seriously and it adds to their pressure too! These days, I stick to growing greens rather than veggies, as the former has a lesser and easier cycle.”

Not rocket science
Those who’ve been into urban farming, almost unanimously feel that there are not many challenges, but only certain limitations.

Eldho says, “I started only a year back, but now I have so many varieties of fruit trees — including some exotic varieties like baraba. It’s just simple science — sow seeds or plant a sapling and they grow by themselves! All you need to do is take care of them every day.”

Priya adds, “There are not many challenges — I, for sure, didn’t have that many. I didn’t do everything initially on my own; I had a person, who helped me at the beginning. But after first quarter, I understood more — how to add nutrition to the soil, what kind of nutrition one should buy, when one should use organic pesticides etc. I wouldn’t say I’m all that well-versed now, but I’ve started experimenting with a few vegetables.”

But Priyanka has a slightly different point of view. “We realised that though many people were willing to take to urban farming, they didn’t have the right kind of information — which crop to grow in a particular season and more. There is a lack of information and lack of access to raw materials. Even if you go to nurseries, all you’ll get is a show plant or a flowering plant,” she says.

Support from all quarters
For an aspiring urban farmer, there are options aplenty if he/ she needs guidance or support — apart from the horticulture society of India and the help from the government, there are also several initiatives like iKheti, myHarvest and more for people to seek help from in every city across India.

Priya feels that it’s just up to people to go ahead with their passion and everything else will fall into place if one goes about pursuing urban farming properly — “The government and horticulture society help you in setting up the base by providing kits, grow bags and more. So, it is definitely not difficult to kickstart your green dream anymore!”