Valour, renunciation and sacrifice were at the heart of living in ancient Indian societies and who could better epitomise this indomitable spirit than Bahubali, the Jain saint , immortalised in a gigantic 58.8 feet statue at Shravanabelagola? But not many know that this is not the only tribute to the great warrior-saint who in disgust over worldly life, renounced his kingdom and his clothes and became a Digambar monk. There are five other statues of Bahubali – at Dharmasthala in Dakshina Kannada, Gommatagiri in Mysuru and Arthipura in Maddur of Mandya, Venur in Dakshina Kannada and Karkala in Udupi, that showcase Jainism for the prominent religion it once was. Reinforcing that narrative is a little known statue of Bahubali at Basti Hosakote in the backwaters of the mighty KRS reservoir in Mandya that M.B. GIRISH says is a virtual mirror image of the  57 foot statue at Shravanabelagola, and which historians believe could easily emerge as a pilgrimage centre for Jains everywhere.

Not far from Shravanabelagola, famous for the gigantic statue of Bahubali which draws devotees from far and wide, stands another ancient statue, revered by Jains and measuring about 15-feet, in the backwaters of River Cauvery in a tiny village, Kurubara basti or Basti Hosakote in KR Pete taluk of Mandya district.
Unlike the popular Jain town of Shravanabelagola in Hassan which is easily accessible by various modes of transport, reaching Basti Hosakote is difficult as not many people even in the vicinity of KR Pete are familiar with this isolated statue of Bahubali.

To reach Basti Hosakote from KR Pete, one has to travel 20-km to Ganjigere where a Hindu temple dedicated to Lord Varahaswami is a landmark to help a visitor get closer to the place. The priest at Varahaswami temple,  guided this reporter on how to reach Mavinakere and from there, Basti Hosakote. The site is surrounded by fields and a narrow muddy road leads to the backwaters where the river  Cauvery is in spate after a gap of six years.  On the left, one can see relics of an ancient structure covered by a few banyan trees and also the magnificent Bahubali statue made of soapstone. 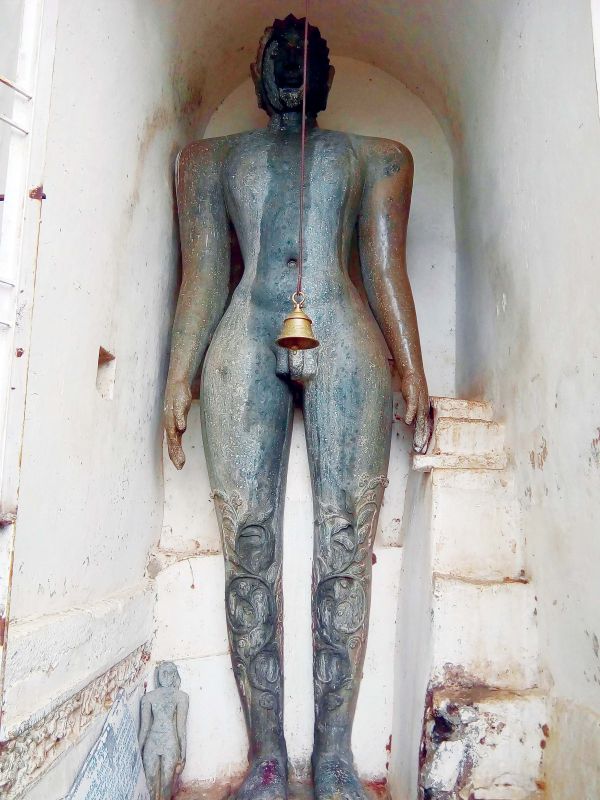 While the statue at Shravanabelagola stands under the sun, at Basti Hosakote, it is in an enclosure offering protection for centuries from the vagaries of nature. This chiselled statue is strikingly similar to the one statue at Shravanabelagola with creepers till the knees and the face of Babubali as serene as ever.  A bell is attached to the ceiling of the enclosure and devotees can also bathe the statue from head to toe. A mutilated statue of Bahubali, just about a foot in height, stands  by the side of the big statue. This small sized statue might have been used to hold religious rituals in the past.

For the convenience of visitors, a signboard in Kannada gives a brief history of the site. A mantapa nearby has now been half submerged in the backwaters as the KRS reservoir is full to its capacity. Protection walls have been constructed to prevent soil erosion which could damage the ancient site.

The place where the statue stands was in fact a village in olden days. It got submerged after KRS was built some kilometres away at the confluence of rivers Cauvery-Hemavathy and Lakshmana Theertha. After the village got submerged, villagers moved to a safer location. The abandoned village slowly  turned into fields with people cultivating crops such as sugarcane and paddy.

One of the villagers having a field adjacent to this ancient site, Mahendra, says this Bahubali statue has existed for long. “We do our mite to protect this site from miscreants who try to damage it,” he adds. A  villager had once taken away a stone from the site and one of his hands got injured. Realising his mistake,  he kept the stone back at the ancient site and since then,  the villagers fear that any damage to the site could cause them harm.

During the month of Karthika in November, villagers gather and light lamps for the whole month as a mark of devotion to the deity.  A freelance researcher, Thomas Alexander says this area is known by many names- Basadi Halli, Bastipura and Kurubara basti. Inscriptions say the place was known as Manikyavolalu and Manikyadodaluru and was an important Jain centre during the rule of the Ganga and Hoysala dynasties.

There were two basadis, both of them are now in ruins, Mr Alexander says one is half submerged in the backwaters nearby. The first basadi was built by Punisammayya, a chieftain of Hoysala king Bitti Deva (who became Vishnuvardhana later) in the year 1117 AD. The 15 feet tall statue of Gommateshwara was built in 1165 AD by a chief, Somayya under the rule of Hoysala king Narasimha I.

Some authors are of the opinion that the Bahubali statue at Basti Hosakote might be older than the colossal Bahubali statue at Shravanabelagola. A resident of Saligrama in Krishnaraja Nagar of Mysuru, Hemanthkumar, who is the priest, conducts pujas to the statue and under him, a mega event, the Mahamastakabhisheka or head anointing ceremony, was held three years back. “I have been performing pujas to Bahubali for 10 years now and during the Mahamastakabhisheka, sacred pots to pour holy water on the statue are auctioned and the highest bidder gets a chance to perform the head anointing ritual,” he says. 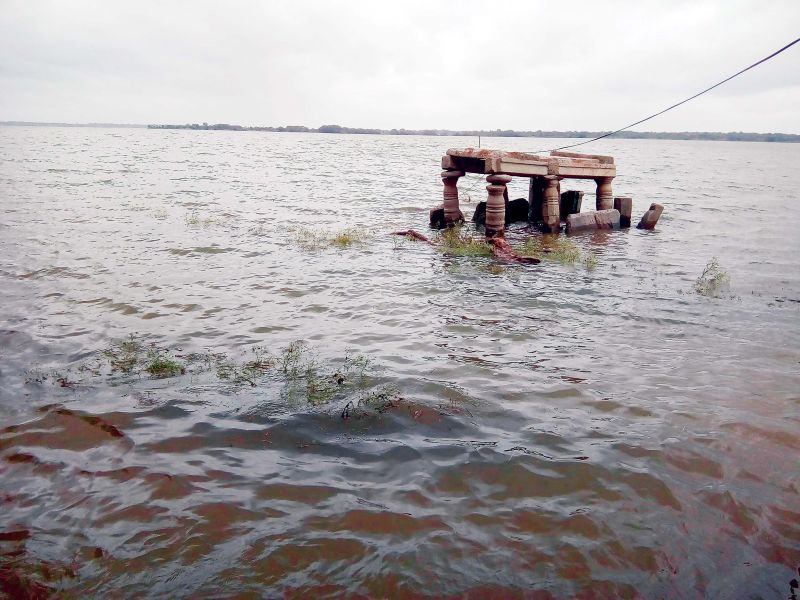 Mantapa submerged in the backwaters of KRS dam.

Earlier villagers used to anoint the head of the statue with oil. But after an awareness campaign, they have stopped pouring oil on the head and drop oil at his toes.  “The oil soaked statue takes me a day to clean up,”  says Hemanthkumar. He is thankful to officials of the irrigation department for constructing a protection wall at the site to safeguard it from erosion. “When the water level rose in the river, water used to touch the feet of Bahubali. Now, that has stopped and the site is safe,” he says.

Meanwhile, a trust has been formed to develop Basti Hosakote into a major pilgrimage spot. “We are planning to acquire nearby fields to make sure pilgrims have a comfortable stay at the place. Veerendra Heggade pontiff of Dharmasthala has assured necessary help for development of Basti Hosakote,” says Hemanthkumar.

With the visitors to Basti Hosakote slowly increasing, it’s time to take a fresh look at this statue of Bahubali which has been relegated to the shadows for  a thousand years and is waiting for its share of attention. Jainism is a faith which drew many a  mighty warrior to its fold and continues to enthral countless minds in the modern age because of the  immortality of the thoughts it preached. A bit more care for relics like the statue at Basti Hosakote is a small tribute we can pay to a religion which spoke of peace, non-violence and calm in a world of hostility, hate and war.