Madventure: Call of the Lofty mountains

Shashi and Anusha at Everest Base Camp with crew members of BBC World Wide.

It all began in the aftermath of the 2013 floods, which hit the divine landscapes of Uttarakhand. Anusha Subramanian and Guneet Puri, who had known each other from a training course at the Nehru Institute of Mountaineering, met Shashi Bahuguna during a fund-raising expedition to help the people affected by the floods. Anushua and Guneet had organised the trek, while Shashi joined in.

With the focus on safety, they keep a tight client to guide ratio. “We take groups of 12 people, and interact with them personally. We oversee their preparations before each trek. A lot of our trekkers are women and senior citizens, whom others are not capable of handling. We take pride in escorting everyone to the mountains,” says Guneet. Depending on the number of people who sign up — right from the cook, to the helper — the company looks deep into every detail of comfort.

One trek that they remember with fondness is their latest one to Everest Base Camp (EBC). They were trek guides from India for a TV show named I Can You Can, which aired on National Geographic. “We have led treks to EBC in the past but in small groups. This was the first time we led a group of over 30 people. As trainers and guides, we ensured that the crew members, host and participants were all feeling well at all given points of time,” says Anusha. Explaining the nature of trek, she points out that one needs to train for at least three to six months for the trek, if not more. “Trekking to EBC is no walk in the park. Especially not for those who have no basic level of training or are supremely unfit,” she adds 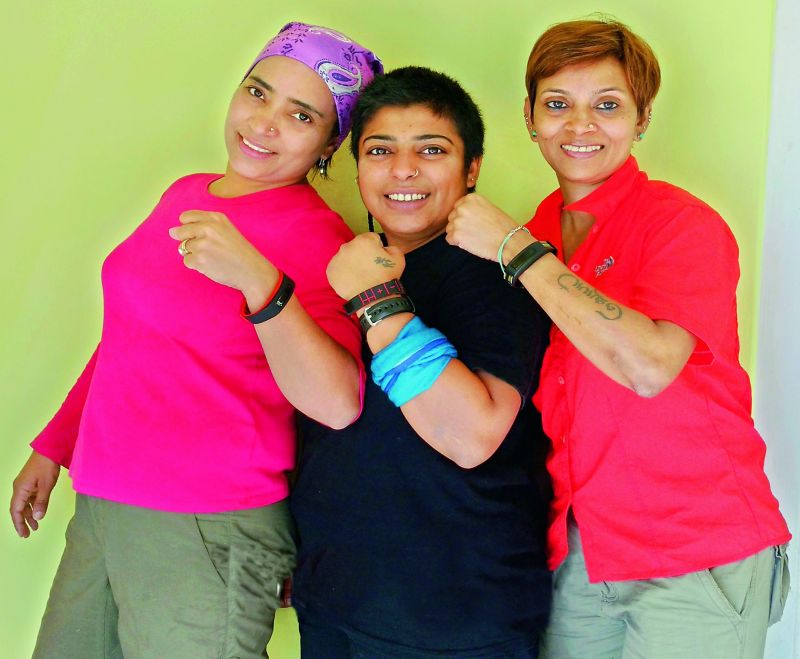 One of the memorable aspects of the trip was also the fact that celebrity TV personality and health nut Milind Soman had gone along with them.

Explaining the style of training that the group underwent, Anusha says, “They underwent almost a boot camp style training in the Sahyadri Hills with a tight and rigorous training schedule.” She adds that their training included yoga sessions given by Shashi, who is a certified yoga trainer. One of the memorable aspects of the trip was also the fact that celebrity TV personality and health nut Milind Soman had gone along with them. “Yes, we met Milind, who joined the group at Lukla in Nepal, and trekked with us all the way to EBC.”

As women in a largely male-dominated field, Anusha rues that the group has to be especially stringent about the image, since they are often looked at as being weaker physically and mentally. “In the outdoor industry, perhaps more than in any other industry, the male to female ratio is substantially skewed. There are less than a hundred women in the country who are professionally involved in adventure sports. We faced a lot of sigma and doubts,” she explains. “Since we have been in the field a while now, we have proven ourselves to be equal to our male colleagues.”