Unlike most Hindu shrines, the Hassanamba Temple – built in the Hoysala style of architecture – is open for worship only for 9-15 days in a year.

It is a famed shrine which gave the town of Hassan its name. Hassanamba Temple, dating back to the 12th century is a big draw for devotees including top politicians during this part of the year and has several features which have earned it a unique place in the annals of Hinduism.

Unlike most Hindu shrines, this temple-built in the Hoysala style of architecture- is open for worship only for 9-15 days in a year. This year, the temple is open from Thursday morning (Oct. 20) and will remain accessible till November 1, a period when the country celebrates Diwali.

Though, there is no documentary evidence to back the folklore that Hassanamba Temple should remain open and closed for a certain time, officials of the Muzrai department who are custodian of the temple say it will be open for the public on the first Thursday after Poornima (full moon day) in Ashwayuja month in the Hindu calendar and the doors are sealed a day after Balipadyami (Diwali).

Muzrai officials claim they have searched for documentary evidence to find out why Hassanamba opens and closes at a specified time but their efforts have not yielded any result. They feel it could be because of beliefs which have been passed on from generation to generation keeping the tradition alive. 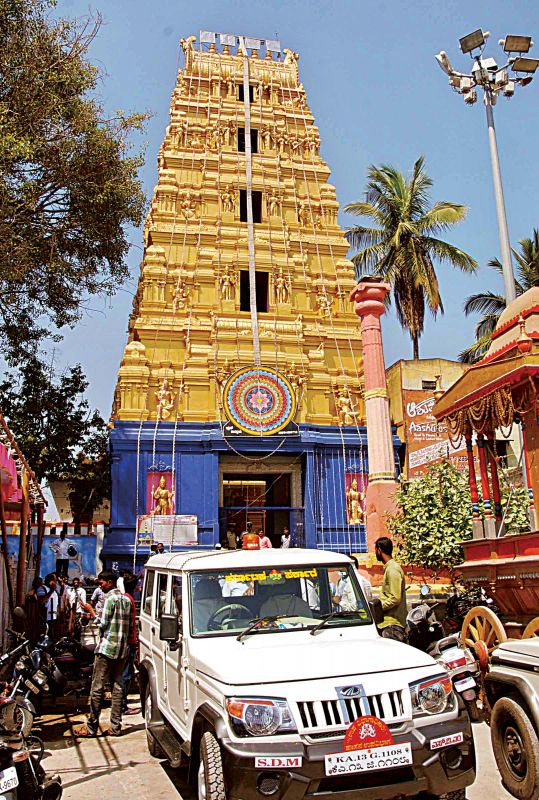 Even the mythology behind the founding of the temple is unique. The seven Maatrukes or mothers (Brahmi, Maheshwari, Kaumari, Vyshnavi, Varahi, Indrani and Chamundi) came floating to South India and were taken aback by the beauty of Hassan, deciding to make it their home forever. Maheshwari, Kaumari, and Vyshnavi decided to stay in the three anthills inside the temple and Chamundi in Kenchamma's Hosakote.

Indrani, Varahi and Vaishanvi chose the three wells in Devigere Honda, a lake in close vicinity of Hassanamba, which now forms the Gandhi Bazar area in Hassan town. It is said that the deities bathe in the lake and perform penance and so devotees make it a point to worship these deities in the lake.

Once in a year when Hassanamba Temple opens, Vaishanvi, Varahi and Indrani are invited and worshipped here. The temple dedicated to another Saptamatruke, Chamundi, remains at Kenchammana Hosakote about 35 km from Hassan town where animal sacrifice is performed and devotees worship this deity round the year.

An official who is present when the magnificent temple doors are opened, told Deccan Chronicle: “While shutting the doors, the deities are decorated with flowers and the lamp is lit. The ghee lamp burns throughout the rest of the year when the shrine is closed .When opening the doors, thick smoke engulfs the sanctum sanctorum with the glowing lamp and the flowers still fresh inside.”

At the time of sealing the doors, the official make it a point to ensure they are airtight and not even an ant can makes its way inside. Contrary to the belief among devotees that food offerings are made to the deities inside the sanctum sanctorum, the official version is that no such offerings are kept inside.

In case devotees miss getting a glimpse of the deities at Hassanamba temple when it is kept open, three turmeric mounds which symoblise the deities-Brahmi, Maheshwari and Kaumari- are kept outside the entrance of the temple for devotees to offer prayers. Entry is barred for the public at the time of naivedya (food offering). Authorities make elaborate arrangements for the devotees to get darshan, they can opt for free entry or with special passes priced at Rs 300.

Locals say that only local residents used to visit Hassanamba shrine earlier but now that its fame has spread far and wide, people from all places reach here during the Diwali festival. A devotee, Parvathamma, says that the deities are powerful and answer their wishes and added that she is visiting Hassanamba for the second successive year.

Prominent among visitors to the temple are former Prime Minister and Janata Dal(S) H.D. Deve Gowda and his family members. Hassanamba, like many other shrines across the country, symbolises the collective faith of a people in their gods on whom they can fall back in times when their faith faces challenges and their lives look like falling apart. Generations of our ancestors have lined up at its ornate doors to open up their hearts and minds and will continue to do so in the years to come.