Lifestyle Travel 20 Jun 2019 Out of the world
Lifestyle, Travel

Out of the world

Jaswant Singh Rawat of the 4 Garhwal Rifles not only captured the machine gun, but also staged one of the biggest solo defences of the entire war of 1962

A solitary tear rolled down my cheek as I imagined a 21-year-old kid in front of me taking cover, just before he took up the near-impossible task of capturing an enemy machine gun which has been raining fire from the morning. The soldier standing next to me explained how Jaswant Singh Rawat of the 4 Garhwal Rifles not only captured the machine gun, but also staged one of the biggest solo defences of the entire war of 1962. According to the local Monpa folklore stories, the soul of Baba (as Jaswant is affectionately called) along with the two Monpa girls Sela and Nura (who had helped Jaswant’s cause and died over the course of the battle) still roam these parts protecting them from enemies. The Battle of Nuranang had caused a casualty of 300 for the Chinese in three days. The Chinese were completely surprised that it was just a single soldier who caused this substantial damage (they initially thought they were facing an entire battalion) and in rage cut off his head, only to send back a bronze bust of him recognising his conspicuous bravery after the war. The nation awarded its hero with a Maha Vir Chakra and built the Jaswantgarh War Memorial in his memory.
The story of Jaswant was only one of the many legendary stories that we took along with us, as we resumed our journey to the cold, foggy and very beautiful town of Tawang.

A day back we had started from Kohora, Kazirangam in the plains of Assam towards Tawang perched on top of the Himalayas in Arunachal Pradesh. We, the cousins’ group, had every reason to be excited about what lies ahead of us based on the previous evening. Come on, who wouldn’t feel that all the planets had aligned right for us to have a rare sighting of a tiger in its natural habitat getting ready to hunt a deer or a near tragic experience of a greater one-horned rhino nearly flipping our jeep upside down. 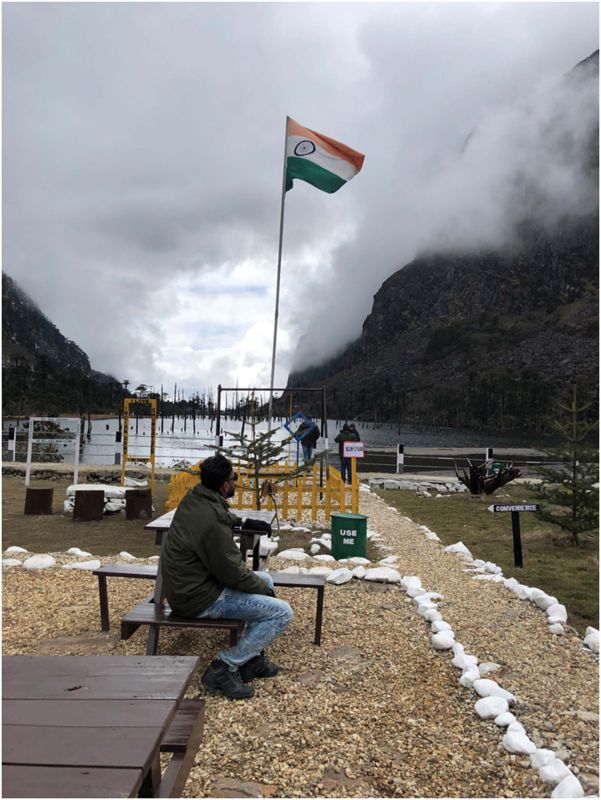 After verifying our Inner Line Permit, the guards at the border allowed us to cross into the state of Arunachal Pradesh. Clearer skies welcomed us by the time reached our destination for the day, Dirang. We were up very early in the morning. Sipping down the very hot morning tea, we were on the road again. Tawang was still a day’s travel away.

It was white, white and white all around. Those goose bumps you get when you touch snow for the first time in your life. The group had gone crazy. Kartik and Meghana were busy making a snowman, Aswin and Krishnachandran were sliding down the ice like they will never get the chance to do it again and I was busy configuring a brand-new Sony A7iii, in hopes of adding a few pictures to my photo collection, Shades of Life. 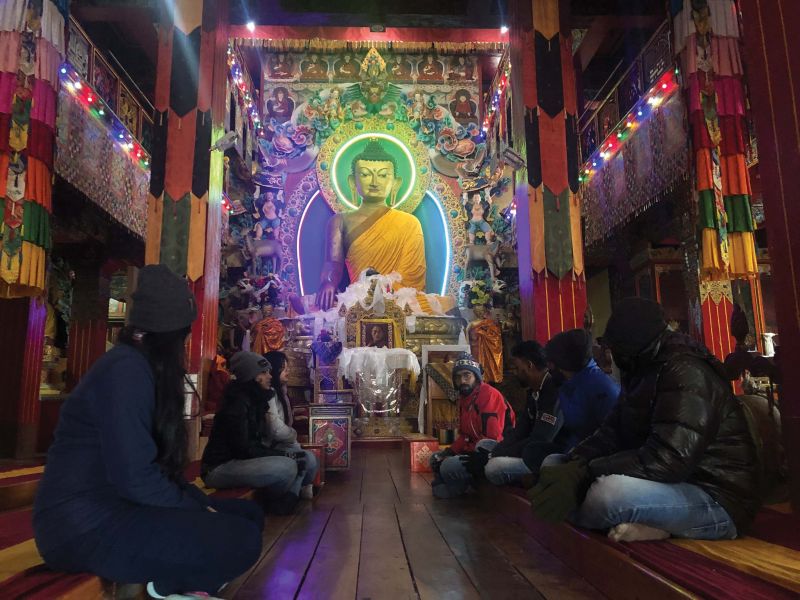 Situated at a height of around 13,700ft above sea level, Sela Pass receives heavy snowfall throughout the year and this day was no different. Tea starts tasting better as we go up in altitude (as Mohanlal once said). A brief photoshoot in the near blinding blizzard later, we were on our way down towards Jang Valley.

Like almost all the other towns we had seen in Arunachal till now, Tawang was built on different levels of land carved out of the mountains. We were on our way towards the Indo-China Border at Bum La. The road after Tawang and up was a treacherous one and it was freezing cold. We required an army permission to enter the Tawang-Bum La Road and only Indian citizens/Tibetan refugees were given the permit. In the initial phase of the climb, we could catch up on a magnificent view of the Golden Roofed Tawang Monastery meditating silently on top of a mountain. On the road towards Bum-La, we were able to spot several frozen lakes hibernating and waiting for the correct time to wake up.
Bum La army check post had a reception room where we had to wait for some time till the previous batch returned. The army allowed only a group of 20-30 to be present at the border at a time. The soldier at the gate was explaining to us with a smile how the life at the border is. They were posted here for at least three months at a time and the temperature at nights usually drops down to sub-zero levels.

A deep sense of patriotism has evolved among the men here after the war and we could see the army men and the civilians walking about the streets of Bomdila and Tawang with no friction and full of trust towards each other. The place also sees one of the lowest crime rates in India. Natural beauty combined with beautiful people and you know that you are somewhere special.

(The author works as Associate Product Manager at Tally Solutions Pvt.Ltd, Bengaluru. His immense passion for traveling and photography  persuades him to take time off his busy schedule to travel and experience different cultures)