The German couple Leo and Sebastian is on an ambitious world tour for over 10 months now, and they’ve already covered 15 countries without once taking a plane! Ask them about it on their brief stopover in Hyderabad and Leo explains, “We are very environmentally conscious people, and flying has one of the biggest negative impacts on climate change. Earlier, when planes had not become relatively less expensive, cross country travel used to be by road. So we thought why not take it our ourselves?”

The couple has had some interesting encounters. “We came to India from Pakistan, and surprisingly, the people at the border received us so warmly. The media may give a certain impression but the civilians there are so fond of India,” she says.

But not everything has been a cakewalk. “In China, they not only checked our bags thoroughly but even asked us strange questions like what we thought of Hitler, why we don’t have kids, and when we would have them! We even got separated once when Sebastian had to go to another room with a police officer and the atmosphere was quite tense. But we stayed in China for almost a month and it was just the best experience there,” narrates Leo. 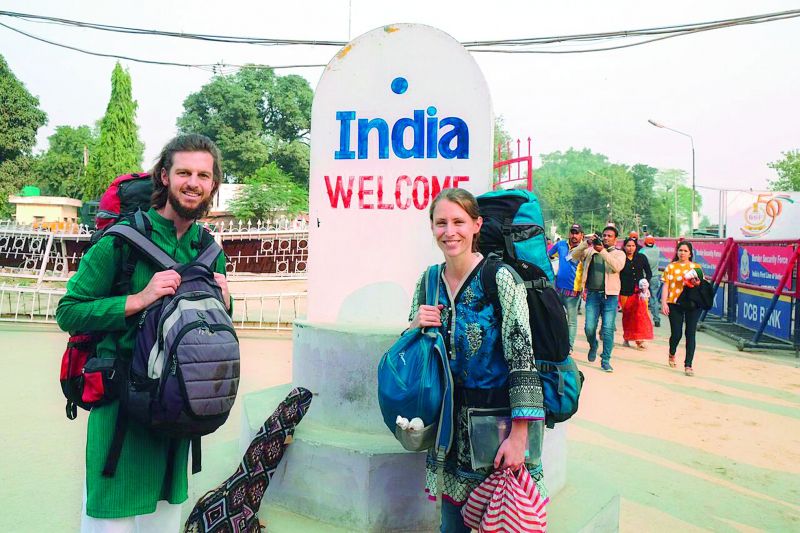 The travel enthusiasts pose for a picture as they enter India

Their visit to Hyderabad couldn’t have happened at a better time. “We attended an exhibition called Mapping Frontiers at the Goethe Zentrum and also followed the Krishnakriti festival’s formal inauguration,” says Leo, adding, “We went to the Charminar, Mecca Masjid, Qutub Shahi Tombs and the Old City too.”

After wrapping up Hyderabad, the couple headed to Vizianagaram where they experienced the farm life. “Our friend invited us to their farm, where we watered plants, fed the chickens, and Sebastian even learnt how to maneuver the cows and became a shepherd for a brief while,” explains Leo with a laugh, adding, “Having been to many Indian cities, it was really nice to spend time at a slow and quiet town.” The couple is currently in Vishakhapatnam for a week before they head off to Bheemavaram and then Nepal.

They also plan to travel for about three weeks in a container ship from Hong Kong to Mexico. “It is something we have been wanting to do,” says Leo.

Interestingly, Sebastian gave up his cushy job as an industrial engineer as did Leo, who worked as a manager at the Centre for Environmental Education.

As for their future plans, they say, “We initially planned to travel for one year, but there is so much more to see. We will go on touring for as long as we can afford it and the day we feel that it’s enough, we’ll pack up and go.”