Ruining the ruins: Keep vandals out

Winds of change are sweeping through the World Heritage Site, Hampi and nearby Anegundi, though they still lack  several tourist-friendly facilities which other popular tourist sites boast of. Of late, the 15th century capital city of the Vijayanagar empire is not only attracting  big crowds of foreign and domestic tourists but also young tourists particularly those from metros and has become a popular eco-tourism destination too. From  'haalu Hampi' or ruined Hampi, the ancient capital has come a long way with the New York Times recently placing it second on its list of must-visit places in the world. What therefore  came as a shock  was a video circulated in social media of some youth vandalising pillars at the famed site. A granite pillar in the prakara of the ancient Vishnu Temple, behind the Elephant Stables at Hampi was seen being pulled down by some miscreants. Maybe, those who hardly care for the glory of bygone ages, have also forgotten the hard truth that there can never be another Hampi, or a Collosseum or the great pyramids of Egypt for that matter for these were created at a time when kings and emperors chased thier dreams knowing no bounds of wealth or manpower and created marvels which have left posterity gasping for breath.  Or have those who were supposed to keep these magnificent structures safe and away from meddling minds, not paid enough attention to the enormity of the task in hand? Shivakumar G. Malagi dwells on recent happenings and changes in Hampi which need the urgent attention of those in power.

Soon after the act of vandalism at Hampi came to light, the police arrested four persons from Bihar and Madhya Pradesh but the fact that they could carry out their despicable act with such impunity, created doubts about  monument protection and whether the Archaeological Survey of India (ASI) is carrying out its duties efficiently.

In the recent past, ancient sculptures and monuments like the Koti Linga at Chakratheertha, the watch tower at the Raghunatha Malyavantha temple, and a  carved pillar at Achyuta Raya temple have been vandalized at Hampi but  there has been no headway in the investigation. 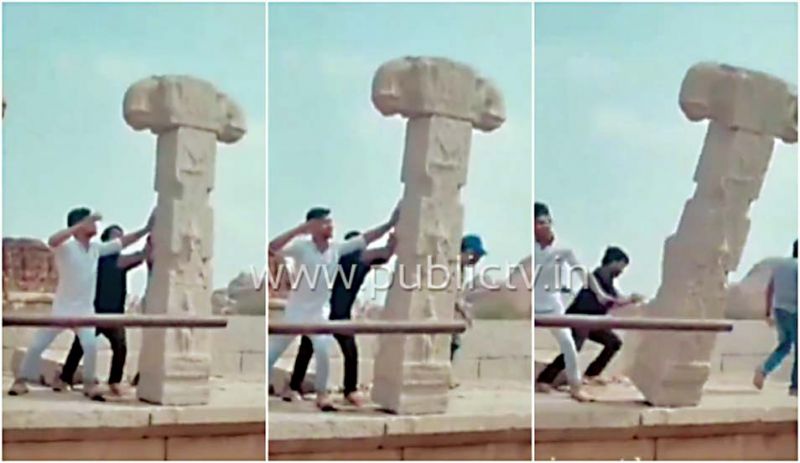 Hampi was a forgotten wonder until 1856 when it was re-discovered by Alexander Greenlaw of the East India Company. Until the1980s, it used to draw big crowds only during three festivals- Shivratri, Hampi Jatra and Phala Puja. Things started happening only after former deputy chief minister late Mr MP Prakash took the initiative to popularise Hampi as a tourist destination by organising the state-sponsored Hampi Utsav in the 1980s.

In 1988, UNESCO declared Hampi a world heritage site, which led to a boost in the number of tourists. Then came star-hotels , high-end tourists and the Centre’s regional air connectivity scheme UDAN which ensured flights  from Bengaluru to Vidyanagar airport in the JSW steels campus. As tourism grew and tourist inflow increased, so did security threats and more so as the site is  spread over 41 sq km, containing more than 1,800 heritage buildings, a royal enclosure, markets, fortifications, ponds and temples, settlements going back to the Megalithic age, rock cave paintings, and Ashokan rock edicts. 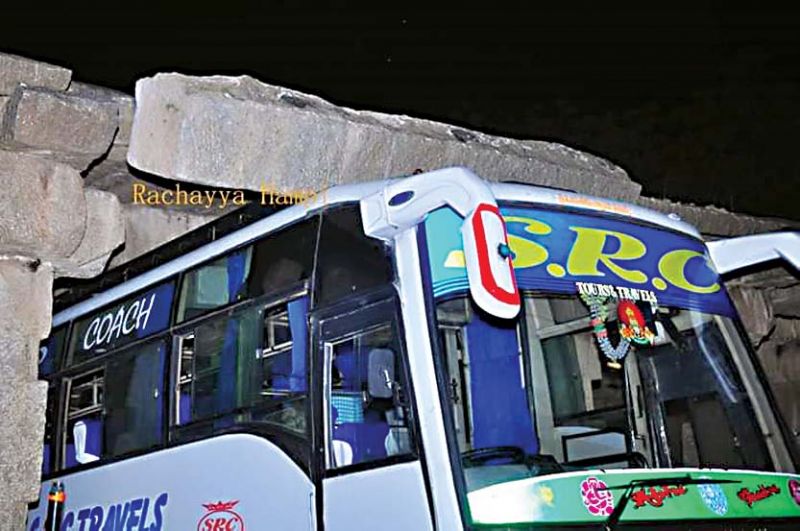 In 2002, the Hampi Authority brought 1,600 monuments spread over 41 sq km under the core zone to be protected and it became the responsibility of the Archaeological Survey of India to maintain and protect them.The ASI has recognized 57 monuments here as World Heritage Sites and the state  archaeological department another 1,800.

Apart from boasting of the world-famed monuments of the 15th century Vijayanagar empire, Hampi has the Daroji sloth bear sanctuary, a river otter’s sanctuary in  the backwaters of river Tungabhadra and  the serene hillocks of Anegundi in the vicinity, a big draw for young tourists. And there is also Virupapura Gadde, a forest land surrounded on all sides by the Tungabhadra and a popular destination for the care-free generation.

With more and more youth heading for Virupapura Gadde, popularly known as ‘Hippie island’ and to glamourous resorts across the Tungabhadra river, where they can party to their heart`s content, the need for safety and security measures has also grown manifold.

But fame brings its share of infamy too. Anti-social elements have made the best of the anonymity the heritage site offers to their advantage.  In October 2007, the police picked up suspected Pak-trained militant Imran alias Bilal with a huge cache or arms and bombs and Bengaluru city`s map. He was running a handicrafts shop right in front of Virupaksha temple for five years. Imran confessed to having undergone terror training in Pakistan.

Last year a foreign tourist triggered a ruckus at Hampi after carrying and consuming liquor inside Virupaksha Temple premises – a prohibited area. A picture showing him with a liquor bottle inside the temple went viral, triggering protests  from local activists.

Liquor is prohibited in a 2-3 kilometres radius around the temple but even today, tourists manage to go around the heritage site with a beer bottle in hand and it is certainly an issue which has created huge doubts about the state of security.

“Tourists come here from Virupapura Gadde where hotels and lodges sell liquor. However they are able to get it inside the temple which is certainly a lapse on the part of the security staff as they should not have allowed it. The place doesn’t even have minimum security like metal detectors. If it is liquor today, tomorrow somebody may sneak inside with something really dangerous. It needs to be checked,” Ramachandra, a devotee said.

The negligent attitude towards the scattered ruins besides the big monuments is also shocking to say the least.  Hampi authority officials admit that as they are spread across 29 gram panchayats in an area of 4,100 hectares with no less than 1,600 monuments, the Hampi ruins are virtually “impossible” to protect considering the scanty security personnel currently taking care of the area. Furthermore, fencing the entire 4,100  hectares is unlikely to happen as locals traverse through the place to their fields and also etch out a living by engaging in trade.

“We are planning to install more Closed Circuit Television Cameras (CCTVs) across the entire area to keep track of any vandals. We will then be able to apprehend the culprits within the hour if there is any act of vandalism,” said an official.

Fencing has been erected around many sites and monuments. “This looks odd and diminishes the look of the heritage site. There is a stone wall near a site called Queen’s Bath. If you put up fencing between connected sites, it distorts the context and meaning,” says Virupaksha Poojarahalli, professor, history department, Hampi university.

The irrigation for water-intensive crops in the area too poses a threat, especially to heritage structures located in agricultural fields, says an expert with UNESCO’s World Heritage Committee. According to him, crops such as paddy and sugarcan are grown in water-logged fields that may weaken the foundation of monuments.However, the authorities say that the topic is “sensitive” as the local economy depends on farming. A strategy for managing this issue should be devised in close consultation with local stakeholders, they feel.

Residential layouts, business establishments, resorts and jaggery manufacturing plants too have come up distorting the orginal landscape of the heritage town. Neither ASI, nor the state archeology wing or the Hampi authority have bothered to connect the scattered monuments with the famed  Hampi monuments. Many tourists guides do not inform tourists about monuments located in less-frequented locations, as a result, these monuments turn into dens of illegal activities and  fall prey to miscreants.

Ballari Superintendent of Police Mr Arun Rangarajan says that the four culprits who have been arrested for the recent act of vandalism have confessed to it.

"They were excited on seeing the monuments in the Hampi. They claim to have  toppled the pillar in sheer excitement.They had no idea how historically  significant Hampi is" the SP explains.

The state government will no doubt have to increase the number of security  personnel at Hampi  for more efficient protection of the ruins and also train tourist guides on how to advise tourists to behave in the heritage site, says a tourism department official.

If this does not happen fast, future generations will have nothing to do but curse us for turning a blind eye to a treasure trove of history and for leaving them only haunting images in history books to admire.