Hyderabad: An escape to the top of Khilla Ghanpur

The picturesque view from the top of the mountain.

Hyderabad: The drive through Bhootpur, just a few kilometres from Jadcherla on the Hyderabad-Bengaluru highway, is quick and fast. Bhootpur is another route one can take to reach Mahbubnagar if one turns right. But if one turns left and drives down some 20-odd-km, then one reaches Khilla Ghanpur, now in Wanaparthy district.

One must keep an eye out for those little boards, for the roads are being built and one might miss a turn completely.

An early morning trek means breakfast will be required. One can expect hot stuff from mobile vans all through the highway. Just look for flexis with pictures of idlis, dosas, vadas and puris.  It is nice to have hot puris on a chilly morning with aaloo sabji and an incredibly hot chutney, which the owner of the van says is a must-try.

There are several other options, like food courts, restaurants, dhabas. One is really spoilt for choice.

Once you reach Ghanpur village, a tiny, neat hamlet that also calls itself Khilla Ghanpur after a famous fort here, you have to turn left into a crowded lane where there are small neat little houses, full of greenery, where washed clothes are hanging to dry. A little beyond, a bunch of very attractive Telangana women show you the way to the base of the fort.

There is something about the readiness with which rural areas come to one’s aid. Two guys who were working with sand and cement in the middle of the road moved it all aside to allow us passage. There are some steps going up steeply, with saffron paint high on the hills, symbolising a temple somewhere. There is a road, going uphill that buses take. A car can go up but has to necessarily stop midway, unless it is a jeep. The fort is spread over a rocky and hilly 4 sqkm area. 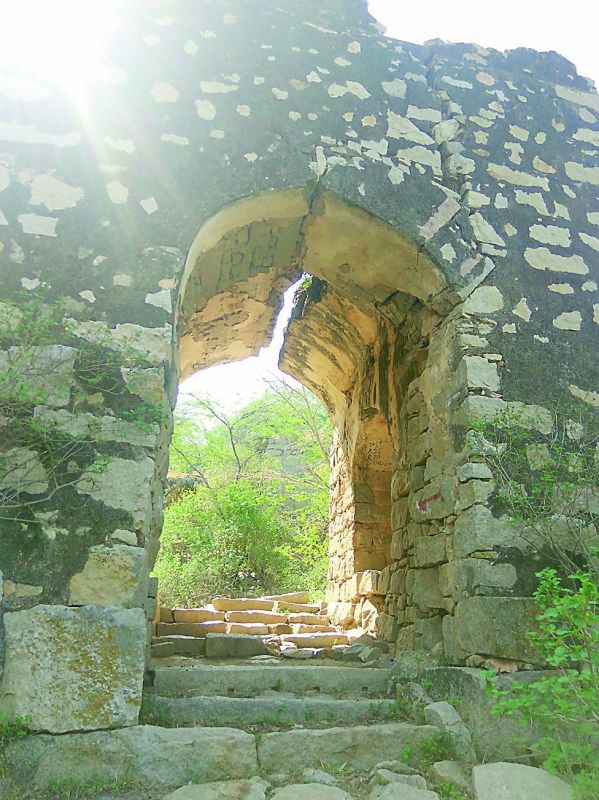 The entrance from where the trek begins.

Khilla Ghanpur is a very steep climb. There is the semblance of a path for some distance but the rest is a scramble. But it is worth it. And if you are doing this in summer, then start very early.

This fort was built by Kakatiya king Gona Gana Reddy in the early 13th Century. The name of Ganapuram Khilla came from Kakatiya ruler Sri Ganapathi Deva’s name, and thus also the name of the village, Ghanpur.

As with all forts, location matters. The top of the hill means advance notice about arrival of enemies and natural protection against invaders. And across Telangana state all forts are mostly built atop what are practically impregnable hills and also have used the natural formation of rocks as strategically as possible. In fact, there are cannons on top and these were obviously used for protections.

King Gona Ganapa Reddy was a vassal to Kakatiya rulers. He was the son of Gona Budda Reddy who became famous as pioneer poet of Ranganatha Ramayana, a landmark book in Telugu Literature.

The fort and monuments demand a 2-3-km trek from Ghanpur village. It usually takes about two hours to trek, explore the fort and return to Ghanpur village. To attract the adventure lovers is an element of mystery. It is said that there are two tunnels, one leading to the village and the other to Panagal fort. Escape routes for kings and their family members were probably de rigueur those days.

The rocky terrain apart from being a natural protection is also spectacular-looking. And though most of the fort is in ruins, as is the path leading to the top of the hill, the view from atop is worth it. One gets a bird’s eye view of everything. And probably because of the season, birds and bees are in abundance here. Chirps and all kinds of sounds made by various birds keep you company, unless you are with a batch of people. The Ghanpur Cheruvu looks large and a little short of water.

Apart from the Hanuman temple midway up the hill, where worship is still conducted, there are other temples too, apart from a few buildings in ruins, stables, caves or maybe rooms belonging to rulers and their family members. History says this fort has survived many wars, including with the Bahamanis, Vijayanagar kings, Bijapur kings and the Qutub Shahis.

“This place is not a protected monument and is going to ruins,” says Nagendra Swamy, Intach convener from Mahbubnagar.

In fact, there is Mahbubnagar Trekking Club, which was formed a year-and-a-half ago by Suragouni Ramesh Goud, who is secretary of this club.

Till date he has trekked this area with family and friends close to seven times. “I hold a press conference a day prior to leaving, so that others can also join us, and it is always linked to a cause so that people take more interest,” he says. There is no charge and all of them travel by a bus from his college.

“Sometimes we just take a walk to the Khilla and back from Bhootpur,” he says enthusiastically. He displayed the same enthusiasm when he did a nine-day, 270km padayatra from Makhtal village in Tangedi, from where the river Krishna enters Telangana and merges with river Bheema, to Somasilla.

He was further inspired by Prof. Adinarayana, professor of fine arts at Andhra University. The professor has trekked 30,000km across six continents and has written 10 books.

Apart from Ramesh’s club, based out of Mahbubnagar, the state tourism department too organises packages to this fort, with overnight stay and food. And since it is not a protected monument, no permission is needed. Youngsters come here to spend the night during summers, climbing on top to enjoy the view and the breeze.

In the footsteps of Enugula Veerasamy
In recent times, Prof Adinarayana travelled 4,000 km by motorcycle in 25 days, following in the footsteps of Enugula Veerasamy, who travelled from Chennai to Kashi. This 4,000-km journey was completed in 13 months and 15 days, along with 100 other devotees, his mother and wife in 1830. He also visited Khilla Ghanpur and, in fact, has written a descriptive para about the same in the book.

Veerasamy took the advice of his friend Pillai and kept a diary in the form of letters and posted them to Pillai. On Veerasamy’s return, Pillai handed over the letters to his friend, who in turn gave it to the then Chennai collector, C.P. Brown (famous for saving the heritage of the Telugu language).

Veerasamy died in 1836 without seen the edited version of the book he wrote. In his memory, Pillai printed the unedited version of his great historical travels, probably the first book of its kind.

Meanwhile, C.P. Brown left the edited version at the Chennai Oriental Library and left for London in 1933, without telling either Veerasamy or Pillai about where he kept the version of the book. Prof. Adinarayana happened to read the first edition of the book by Srinivasa Pillai and realised that this was not the final version. And he went to look out for it and using his professorial contacts finally found the original transcription in the Chennai library. He took it and translated it and the book is there to read in various languages called Kasi Yatra Charitra.

Thai elephants are tortured for sake of tourism

Thailand is getting popular as a tourist destination among Indians