Ujjwal K Chowdhury
The author is a noted media academic and columnist, and former Dean of Symbiosis and Amity Universities.

Indian tourists mainly come to Sri Lanka during the month of May due to the summer holidays.

The first impression you have when you get down at Sirimavo Bandernaike International Airport outside Colombo city is that this is a tiny but clean, green, serene nation of around 22 million people, 7 on 10 of whom are Buddhists, and the rest evenly distributed between Hindus (Tamils) and Muslims and a miniscule 2 per cent are Christians who incidentally, like in India, run a large number of good educational institutes of the country.

As you take the inter-city roads to the nearby urban centres like Colombo or Kandy, you realise how pollution free is the atmosphere, how disciplined are people and vehicles on the streets.

My maiden visit to Sri Lanka in the last week of May of 2018 has made me fall in love with the nation. And the week-long journey across four cities of the nation and in this order, Kandy, Nuwera Elia, Bentota and Colombo, driven by the handsome smiling young man, Jaanaka of Red Apple Travels, taught me many a thing, like the entire journey from garden to cup of tea, moods and colours of hills and beaches, the preservation of Sita-Hanuman memories of the Ramayana times, and how the island-nation is dependent on and possessive of its 2 million strong tourist industry which contributes to one fourth of its annual revenue.

Throughout the year Sri Lanka has a good tourist turn out as different nationalities arrive in different time periods of the year. July to August and February to March are the peak point of the tourist arrivals. July to August becomes a peak point especially in Kandy as there is this traditional parade (“Dalada Perahara”) during the time.  It is a cultural and a religious parade. Tourists as well as the locals come together to witness this traditional event. However, I went during a non-peak time and enjoyed the quietude of the country-side. 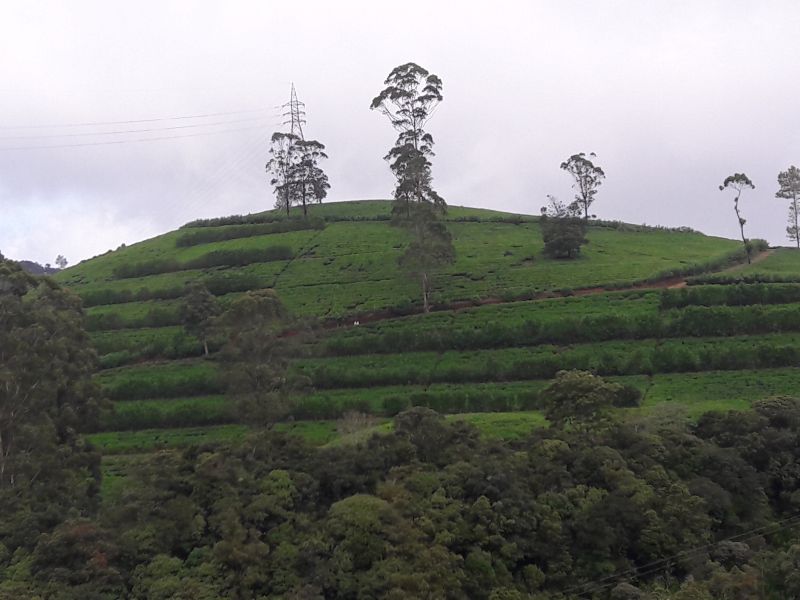 A tea garden in Sri Lanka

Indian tourists mainly come to Sri Lanka during the month of May due to the summer holidays. And that is what I did along with my family. The total tour usually limits to 4 to 7 nights, as told to me by the young well-groomed guest relations professional at Great Kandyan Hotel in Kandy, Imesha. Commonly they travel as a group of friends or family, some 10 to 15 members. We were three of us and we stayed for five nights across four cities.

Imesha also informs that according to the government notification of the arrival cards 79 per cent of the tourists who arrived to Sri Lanka during the year 2016 were gainfully occupied and commonly categorsed under professionals or businessmen. Among them, the various types of occupations consisted of Professionals (23 per cent), Businessmen (16 per cent), Scientists and Technicians (10 per cent), Executives (9 per cent) and 8 per cent of Educationists.

We had in mind the focus on hills sight-seeing, beachside fun and visiting animal homes apart from a cool time in the hotels as our desired objectives. Nissank De Silva of Aralia Green Hills in Nuwera Elia town informs, "A survey conducted by Sri Lanka Tourism highlights that 63 per cent of Indians opt for sightseeing excursions and 49 per cent go for shopping while 41 per cent also prefer sea bathing. Around 37 per cent Indian travellers visit the historical sites in Sri Lanka while wildlife is of interest for 21 per cent".

Sri Lanka has not just pristine beaches but also places of religious significance for Hindus, as places relating to mythology Ramayana are located there. Especially Kandy is a must see tourist destination to Hindus. As there are many religious sights related to Hinduism. The famous Hanumakovil is situated less than two hours drive from the The Grand Kandyan of Kandy. According to legends it is the first place Lord Hanuman landed in search for Sita. We walked up some 200 steps on a steep hill to get to the place and felt a divine joy at the spot.

Another attraction for Hindu believers is the Sitaammankovil at Ashok Vatika in Sita Eliya. This location is also a day tour from Kandy, but better enjoyed staying in Nuwera Elia city. The Sita Amman Temple, located halfway between the highland village Sita Eliya and the Hakgala Botanical Gardens, has become the most venerated of all Ramayana Trail sites in Sri Lanka, because it is believed to be the place where Sita spent most of the time during her captivity on the island of Lanka. After she refused to stay in Ravana's magnificent palace she was transferred to AshokaVatika or Ashoka Vana where she lived under Ashoka trees. It was here that Ravana's wife Mandodari visited her and that Hanuman met her for the first time, identifying himself with the finger ring of Rama. Sita is said to have bathed in the nearby stream. There are remarkable holes in the rocks at the river bank believed to be footprints of Lord Hamunan. We visited each of these and had a great fun with my son hopping from one rock to the other. This being such a location of tourist significance, we lamented the use of poor English in all instructions at Ashok Vatika.

The highlight of our tour was Kandy, which is the second capital in Sri Lanka. It was the last capital of the ancient kings' era of Sri Lanka. The city lies in the midst of hills in the Kandy plateau, which crosses an area of tropical plantations, mainly tea. Kandy is both an administrative and religious city and is also the capital of the Central Province. Kandy is the home of The Temple of the Tooth Relic (Sri Dalada Maligawa), one of the most sacred places of worship in the Buddhist world. It was declared a world heritage site by UNESCO in 1988.

For years Kandy has been known to be a traditional city, and now with the vast tourist turn-up, the concept should perhaps change. The city needs to adapt to the needs of the foreign visitors. For example, the shops should be kept open after 8 pm, more entertaining points should be open, public transportation should be increased after 8 pm for the convenience of the public who enjoys the night life. The government should encourage the businesses to open at night time. At the same time the locals should change the mindset of “night life”. The government and the locals of the city should come together to build a suitable night atmosphere to the city while protecting the traditions of the city and embracing the contemporary needs of tourists.

The best part of our stay at Grand Kandyan Hotel, which is a perfect five star hotel  blending palatial grandeur and comforts typifying luxury in every corner, being located in the heart of the historical city with a 360 degree view of spectacular mountain ranges, and being close to the UNESCO world heritage center, the Temple of the Sacred Tooth Relic and the premier shopping area of Kandy.

A beautiful experience in Sri Lanka, whether in Kandy or capital Colombo, people keep their religious places extremely clean without a piece of paper or even a rotting flower seen on floors or in the vicinity of temples and Buddhist stupas.  The pray with white lily flowers and usually in pristine white dress considered as symbol of peace and purity. The public consciousness of voluntary adherence of cleanliness in public places is so high that I felt once that a delegation of Sri Lankan municipal authorities should be invited to Indian universities and government offices in a few cities to discuss how to effectively implement Swachh Bharat Mission.

Another interesting aspect we came to know is that Sri Lanka has a reasonably good mining industry, especially in Ratnapura, producing gems and precious stones, but no diamond. Quartz, ruby, topaz are among the most frequently available gems, and we bought a set which was cheaper than their counterparts in metropolitan India.

The other strong industry of Sri Lanka is of herbs and spices, and they produce world class Ayurvedic medicines for various ailments, without using any chemicals or preservatives. I had the good fortune of visiting a herbs and spices garden with 900 varieties of trees and plants from which extracts and parts were taken to produce a few dozen natural medicines, couple of which we bought too. Indeed, agriculture, tourism and governments jobs together account for 8 out of every 10 gainful employment opportunities, private or public, in Sri Lanka.

In Bentota town we found some tourism entrepreneurs unhappy with negative local media towards hospitality sector and high taxes by the government on the sector taking away one-fourth of the revenue, without proportionate support to promote the business from the government end.

However, the high-point of Bentota was the private sea-beach of Eden Resort where we stayed, and the tree-houses and designer swimming pool where one could have a drink or dinner even while floating.

The last part of the journey was in the capital Colombo, which is like any major city of India or other Asian nations, with a beach (like Mumbai), but far cleaner than Mumbai. The Freedom Square, the Lotus Tower, the Buddhist temple, the beach-walk, and surely the luxury business hotel where we stayed, Hotel Kingsbury, we shall not forget these for some time ahead. The only lament in Colombo is the existence of several high-risers going up to 20-25 floors also, after seeing a series of towns with just 2 to 4 floor houses and business buildings.

The overall experience of the Indian visitor to Sri Lanka, as per the survey mentioned earlier, has been very delightful for 69.1 per cent and satisfying for 30.69 per cent. For we three, it is 80 per cent delightful. The other important highlights of the survey shows that, 45 per cent Indians come home with a memory of Sri Lanka being a beautiful tropical country; 30 per cent say that the people of Sri Lanka are nice and hospitable; 24 per cent talk about the pristine beaches with golden sand. For us, we loved the diverse attractions. Finally 3 out of 10 Indians are repeat visitors. We surely want to join these three sometime again in near future.

The author is the School Head, School of Media, Pearl Academy, Delhi and Mumbai. He has been earlier the Dean of Symbiosis, Amity and Whistling Woods, and is an avid traveler, having travelled on business or leisure to 41 nations till date.