When man comes in conflict with nature, precious iconic structures inevitably take a hit and one of them now bearing the brunt of devotee ‘intrusion’ in the Western Ghats are the Kavala Caves in the tiger reserve in Joida taluk of Uttara Kannada district. The caves have become a bone of contention between environmentalists and devotees visiting the religious hub who are wonderstruck by the sight of the natural Shivalinga there. But environmentalists  are raising a hue and cry over permitting  devotees to visit the cave as they fear it will harm the flora and fauna including the big cats. This is the last thing the state can afford with people of North Karnataka bearing the brunt of natural calamities like flood and drought owing to deforestation. With major rivers originating in the Western Ghats and drought a permanent feature because of water scarcity, Vittal Shastri examines how the Kavala Caves can be preserved in their pristine beauty for posterity and  serve as a perfect example of the harmony between humans and nature.

Just a few decades ago, the naturally sculpted Kavala Caves were a preserve of the Desai family who used to perform pooja every year during Maha Shivarathri. The family members, who live in the adjacent Ukkali village on the banks of Kali river, claim they  conduct the religious rituals for the Shivalinga,  their household deity.

But what has become a matter of concern is that these limestone caves, situated in the heart of Dandeli Wildlife Sanctuary and Kali Tiger Reserve, are drawing thousands of devotees every year and tourists too. Enthused by the mythological significance of the caves, devotees from neighbouring Goa and Maharashtra converge here in large numbers on Maha Shivarathri.

The  Shivalinga  is no doubt  the focus of attention with  devotees also captivated by the panoramic view of the mountains while trekking nearly 4 km down the hills. The chirping of birds and the serene atmosphere during the walk on the dusty mud road up to the caves  adds vigour to  every devotee. The mud road has been widened to 6-7 metres due to the surge in the number of tourists and more than 1,000 steps have been erected to enable them to reach the caves situated at a depth of more than 1,000 feet. 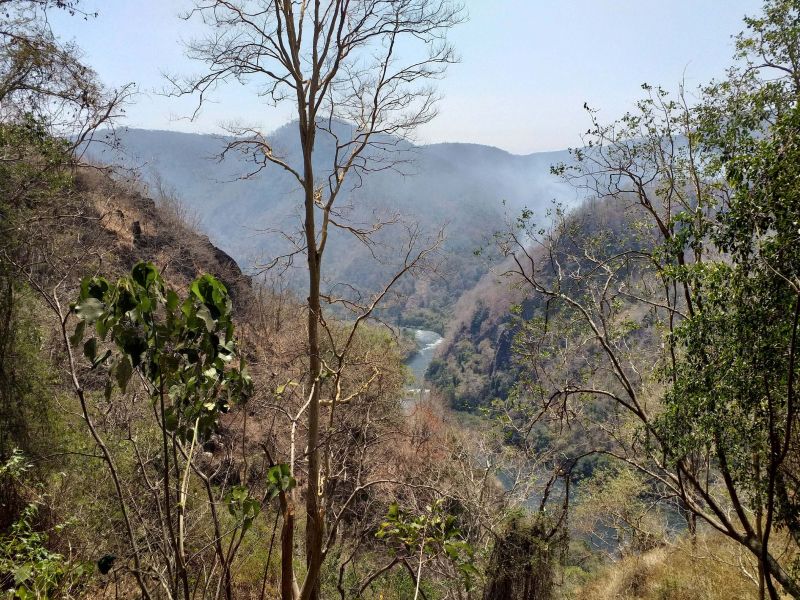 A picturesque view of the Western Ghats and Kali river adjacent to the caves.

The Shivalinga is around 5 feet high with a  diameter of about 5 feet. Devotees crawl more than 50 feet on one side of the caves to witness the Shivalinga and pass through another side after taking blessings. They have to use a torch as the narrow passage is dark though  power supply is now available. Sometimes, the queue of devotees is more than 1 km long on Maha Shivarathri.

Locals believe that the Yogic culture prevailed in the  mountains after growth of the Navanath tradition and sages used to live in the caves to attain Siddhi. They also claim that the Pandavas had stayed in the caves when they were in exile. They believe that Kavala Caves derive its name from a devil named Kavala who is said to have been killed by the great sage Kapila.

The Desai family has been entrusted the responsibility of maintaining the caves under the supervision of forest officials from Kali Tiger Reserve. The forest officials have provided KSRTC buses from Panasoli village which is situated 14 km from Kavala Caves and have prohibited entry of all private vehicles from the little hamlet. 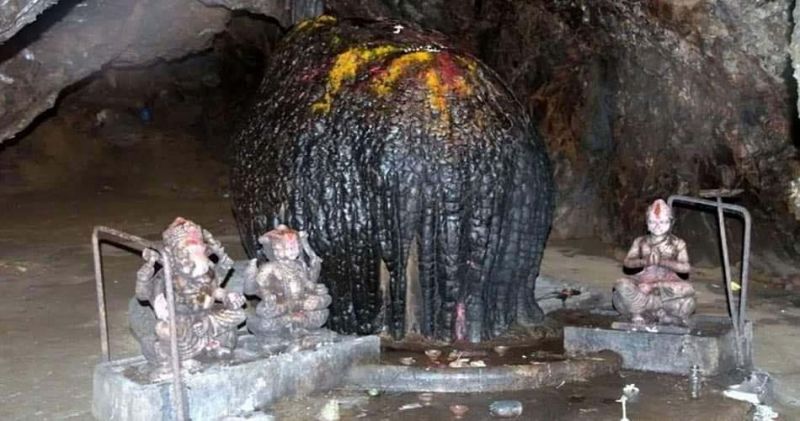 “We used to visit the caves by holding lanterns and by trekking all the way from Dandeli a few decades ago in the absence of power supply and bus service. Now, these caves have become a spiritual hub due to more awareness”, said sixty-five year old Chandravva Badigeri, a resident of Dandeli.

Geologists claim that the natural Shivalinga is nothing but a stalagmite, a growing mound of mineral deposits caused by the calcium containing water dripping on to the floor of the caves. They also claim that such rounded shapes have formed over thousands of years because of solidifying of the calcium and limestone that leaks from the upper part of the caves.

“There are many such caves in the mountains of Uttara Kannada district. Kavala Caves have become a centre of tourist attraction as the stalagmite is big in size. There is nothing wrong in believing that the stalagmite in the caves is a natural Shivalinga”, said M.L. Jagirdar, retired deputy general manager of engineering geology at Karnataka Power Corporation Limited (KPCL) who has conducted research in Dandeli and adjoining areas. 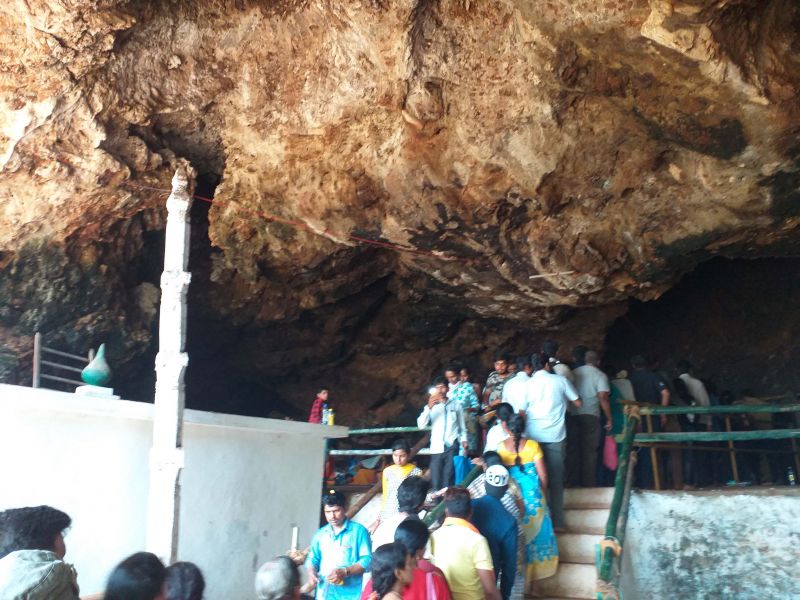 The dense forest surrounding Kavala Caves is home to several wild animals like tigers, leopards, elephants and panthers. The ponds and rivulets in the area are the only source of drinking water for the animals. Therefore, environmentalists fear that these animals are forced to stay away from the area for at least four months after Maha Shivarathri as tourists cause a lot of disturbance and pollution. They have already conducted a campaign seeking a ban on entry of people and vehicles  and contend that the rising pollution has been disturbing wild animals and  birds.

“There are many huge caves situated in the border areas of Karnataka, Goa and Maharashtra. There has been a geological transformation due to creation of loose soil after construction of dams across Kali river and implementation of several projects in Uttara Kannada district. Therefore, there is a need to protect  geologically sensitive areas like Kavala Caves by keeping people away”, said a resident of Dandeli and information department officer Manjunath Sullolli.

Forest officials say the department will launch an awareness campaign to stop destruction of the rich forest cover on Maha Shivarathri every year. Asserting that permission will be given to visit Kavala Caves only once in a year, they say several voluntary organizations will be deployed for a cleanliness drive. “We are allowing people to visit  Kavala Caves under some provisions though it is in the core area of the tiger reserve. We have also created a plastic-free zone and distributed 12,000 bio-degradable bags among devotees visiting the caves this year. We are getting a good response from local residents when it comes to cleaning the venue after devotees leave”, said Basavaraj Patil, conservator of forest and field director of Kali Tiger Reserve.

Dharwad-based PURA Trust has launched an awareness drive through social media to prohibit the entry of people into the dense forest around  Kavala Caves. It has already conducted a one lakh signature campaign after several NGOs and environmentalists submitted an appeal to the Uttara Kannada district administration for the protection of the caves. It has also prepared a fact-finding report after studying human disturbance to the wild animals. It has  urged the government to impose a total ban on tourists to stop them from entering the caves.

“Illegal resorts are mushrooming in nearby  Dandeli in the last few years. Tourists often enter Kavala Caves after obtaining special permission by paying bribes to the officials. Devotees are littering the forest cover in the name of conducting a pilgrimage. We faced a threat from the local villagers when we tried to stop the KSRTC bus service provided to the caves”, PURA Trust president Vijayanand Dodawad said.

Expressing concern over destruction of the forest cover in Uttar Kannada district in the name of road widening and  power projects, he claimed that the proposed Hubballi-Ankola rail project will cause ecological imbalance to a great extent. Environmentalists also contend that the devotees remove branches of small trees to use it as walking sticks to climb the mountain and litter the forest in the name of conducting a pilgrimage. “The heaps of incense sticks and coconut coir thrown by the devotees near Kalala Caves will catch fire leading to forest fires, he added.

No commercial activity on Sundays, holidays in Maui