Sex, sexting no more a taboo for teenagers

Start discussing about sex texting early. Understand what the teenager already knows and then take the conversation ahead.

Hyderabad: One in four teenagers receive sex texts and one in seven has reported sending them, according to a study published in the journal JAMA Paediatrics.

Sex texting or ‘sexting’ is sharing of sexually explicit images and videos through internet or via electronic devices such as smartphones.

The study found that children as young as 11 years have indulged in sexting, with the rapid growth in availability and ownership of smartphones.

In the last one decade, teenagers have begun to explore sex and sexual development digitally.

It is often believed that boys are most often the requesters and girls the senders, but this research suggests that boys and girls participate equally in sexting.

In children, sexting is prevalent in the younger teen years and increases as they grow older. 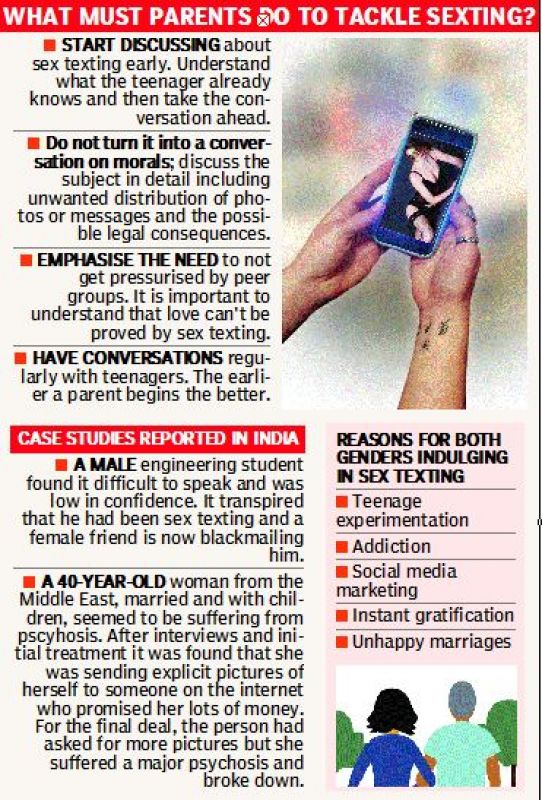 In adults, it is most prevalent in those who are in their forties.

During the 1990s and till 2004, sexting took place in chatrooms of computers, but with the advent of smart phones it has become more portable and personal. Dr Minhaj Nasirabadi, general secretary of the Hyderabad Psychiatric Society, says sexting is about “Trying to explore one’s sexuality and it is risk taking behaviour of the teenager. Consensual sexting is similar to flirting, being romantically involved, and maintaining intimacy with the partner. Non-consensual sexting is found where girls have peer pressure to sextext and are worried that if they do not do so they will be called prudes. Boys indulge in sexting as it enhances their social status.”

Dr I. Bharat Kumar Reddy, consultant psychiatrist at Apollo Hospitals said, “For the new generation, sex is no more a taboo. Sex texting usually starts as curiosity but is later found to be an addiction. The hormonal changes, gratification in terms of ‘likes’ makes one feel good about oneself and they get a lot of gratification. It satisfies their desires virtually which makes them go for it again.”

Young girls who indulge in it are shamed and blackmailed later and that brings on a moral crisis and guilt. They are scared to reveal the details to family members and may have a nervous breakdown.

Experts state that the biggest concern is the possibility of photos or messages being spread to other people and misused. Sexting, according to the research, can cause severe emotional distress and for that reason parents have to be vigilant, supportive and also speak to their children regularly.