Chennai: Kancheepuram and Coimbatore districts have emerged as favourite districts with more bird recordings in Tamil Nadu, reveals a recent study by ebird.org/India, an online portal of biologists and bird trackers.

“This means both the awareness about birds and their migration are healthy in both the districts”, opined seasoned bird watcher

P. Jeganathan. Interestingly, the bird watching is also picking up in Chennai with more students and youngsters engaging into ornithology and there are 301 bird watchers now registered from Chennai and they have recorded 83568 birds over the past three years. Perambalur and Karur have recorded a less number of birds as both the districts have less than 30 bird watchers registered with the portal. 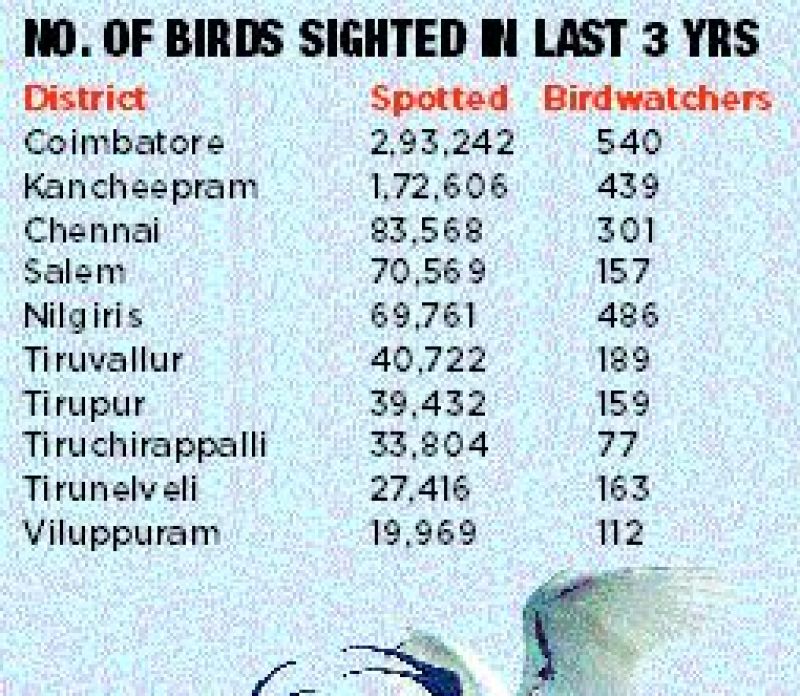 Starting from early 2014, the online bird-listing portal eBird became popular among Indian birders. Since then eBird has picked up slowly and due to the collective effort in Kerala the state become the first Indian state to reach one million bird records in November 2016, the biologist added. This feat was emulated by another eBird-active state, Karnataka, in February 2017.

Following this, Tamil Nadu has become the third Indian state to reach one million bird records in eBird. This happened in August 2017 when a birder Nalini Aravind recorded house crow in this list, added Jeganathan. Birding is not just a hobby, but a habit for several residents in Chennai and Kancheepuram.

In fact, the surprise is North Chennai is home to several endemic birds and also a popular destination for a few migratory birds, says K.V.R.K. Thirunaran, founder, The Nature Trust who is also an avid bird watcher.

According to ebird portal members, the bird watching program is popular in Kerala during the Onam holidays and in Tamil Nadu, it is becoming popular during Pongal holidays where birding watching events are conducted by wildlife organisations.