According to standards set by the Central Pollution Control Board (CPCB), ozone levels should not exceed 100 micrograms per metre cube (µg/m3) over a period of eight hours and 180 µg/m3 in one hour. (Representational image)

Hyderabad: Hyderabad is facing ground level ozone pollution, according to data compiled by the Pollution Control Board (PCB).

Ground level ozone is an indication of rising levels of primary pollutants such as nitrogen oxide, carbon monoxide and hydrocarbons. These chemicals react in specific conditions resulting in the formation of ground level ozone.

According to standards set by the Central Pollution Control Board (CPCB), ozone levels should not exceed 100 micrograms per metre cube (µg/m3) over a period of eight hours and 180 µg/m3 in one hour. 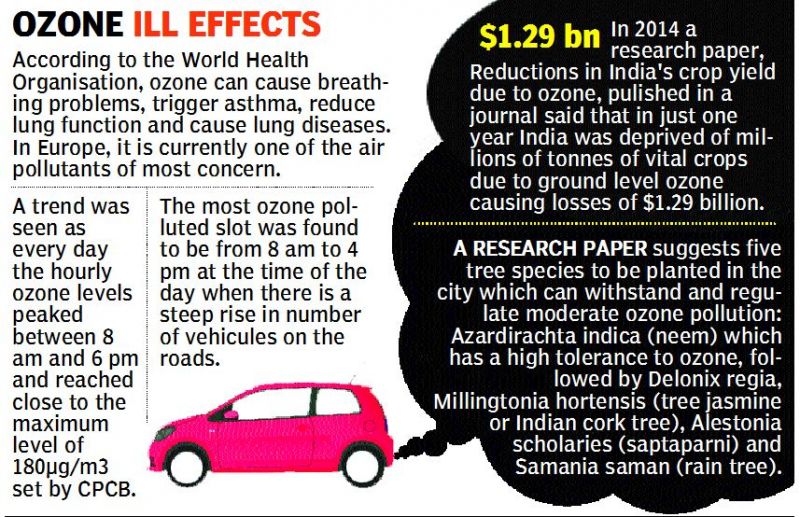 The ozone data recorded by air pollution monitoring units of the PCB in Hyderabad from 12 am on October 14 to 11.55 pm on October 20 is divided into slots of eight-hour. In doing so, each day is divided into three slots of 12 midnight to 8 am, 8 am to 4 pm and 4 pm to 12 midnight. There were  found to be seven instances of the ozone level crossing the eight-hour limit of 100µg/m3.

The most ozone polluted slot is from 8 am to 4 pm. At this time of the day, there is a steep rise in vehicular traffic. The exhaust fumes from vehicles react to form ozone.

A trend was seen as every day the hourly ozone levels peaked between 8 am and 6 pm and reached close to the maximum level of 180µg/m3 set by CPCB.
During the one-week period, a maximum of 171.89µg/m3 was recorded between 4 pm and 5 pm on October 15. Most days, ozone levels stayed between 120-170µg/m3 per hour in the period 8 am to 6 pm.

Taking down the challenges