Sunday story: Misty Manjarabad – Where Glinting swords clashed for a slice of glory

Those who forget history – and in the process destroy it -  are condemned to a worthless existence bereft of a past or future. And those who visit Hassan and do not have the time to climb the hills for a view of Manjarabad Fort, the jewel of Sakleshpur, will no doubt be the losers for turning a blind eye to a priceless relic of history. Tucked away amidst coffee plantations and spice gardens, Sakleshpur, known for its salubrious climate, had earned the sobriquet ‘Poor Man’s Ooty’ during British rule for its enchanting beauty. Few would not be blown away by the sweeping vista that unfolds once atop of Manjarabad fort. But how many know that it was the Tiger of Mysore who built the star -shaped fort atop the hill-top, and from the watchtowers tracked the enemy,  asks M.B. Girish

MIST
It’s the all enveloping, romance of the clouds and the mist that has always been the big draw at Manjarabad. When it rains, the fort attracts hundreds of visitors who don’t want to miss the mist as it comes in, usually  accompanied by a drizzle. More than the publicity brochures of the department of tourism, it is word of mouth publicity which draws tourists. With tourist numbers steadily growing, efforts by the tourism department to provide facilities for tourists such as a concrete path to the fort until forest officials objected to the concrete road, as well as install bio-toilets and dig a borewell to meet water needs, are underway said Hassan Assistant Director Jitendra

The fort was built by the erstwhile ruler of Mysore, Tipu Sultan on a hillock on National Highway-48 connecting Bengaluru with Mangaluru via Hassan. And, Tipu’s armoury at Srirangapatna in Mandya district, which hit the headlines when it was translocated to facilitate laying of the Mysuru-Bengaluru double track railway line, is not the only place where the famous ruler stored his arms and ammunition. Right here in Sakleshpur, a biodiversity hotspot, was the strategic location for the ruler to stock arms in the pyramid structures at Manjarabad fort.

Today, Manjarabad, is off the beaten track, although its rain forests, albeit depleting in recent years due to rapid urbanization and development work still a lure, the thick mist covering the lush green as far as one’s eyes can see. The fort sits at an altitude of 3,240 feet above sea level with the rocky structure overlooking the vast expanse of plains on the one side and the craggy peaks of the Western Ghats on the other. Constructed by Tipu in 1792, the Tiger of Mysore, was greatly influenced by Fort Williams built by the British in Kolkata, and planned the fort in a similar manner with an eight-pointed star design, say archaeologists of the Archaeological Survey of India (ASI), custodian of the monument. 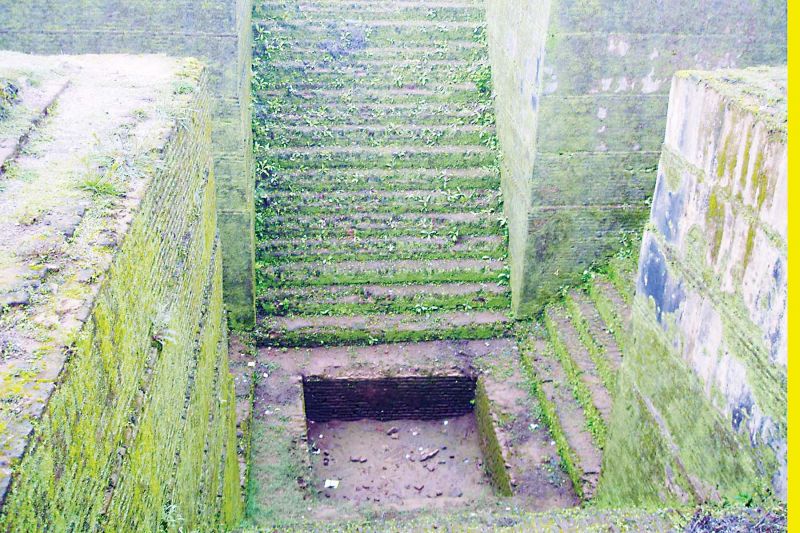 A tank to store rain water

The climb to the hill for a view of the breathtaking monument starts at a curve near Donigal about 6.4 km from Sakleshpur. Climbers have to take a muddy road for a few metres before a concrete path greets them with supporting railings on either side, constructed by the department of tourism.

Why the name Manjarabad? During an inspection of the fort while it was being constructed, Tipu observed the fog cover. Manju is the Kannada term for fog or mist and the Mysuru ruler, observing the beautiful landscape, felt no name would suit it better than Manjarabad. The fort came in useful for him to keep an eye on the British army as well as the Kodagu army as they marched towards Mysuru from the Sakleshpur side. It was, according to historian Srivatsa Vati, a fort to store arms and ammunition.

The place had a history of its own even before Tipu built his fort. The Palegars who ruled the region, had their capital at Maninagapura (present Aigoor) and from these Palegars (vassals), Sivappa Nayaka of Ikkeri, annexed the region in 1659. Later, it fell into the hands of Tipu who constructed the fort.

Built using large granite blocks and mud and surrounded by a deep moat, the fort has a parapet in brick and mortar, provided with cannon mounts and musket holes at regular intervals. Inside, one can espy a cross-shaped tank to collect rainwater to meet the drinking water requirements of the guards. All along the north-western and northern sides are arched cells which served as resting places for guards.

A tunnel inside the fort is said to lead to Srirangapatna, and some believe  Tipu used to travel back and forth on his horse. The fort walls are solid enough to last many more years provided the ASI ensures the historic structure is maintained properly. Owing to lack of attention, the fort walls have fungal growth, rue tourists, who feel signages would provide an insight into the 16th century fort.

An ancient fort with its design reminding you of the stars, a mysterious mist cover which just refuses to disappear and  huge walls from where mighty cannons blazed away at the enemy in battles bygone as rulers locked horns for their place in the annals of history. Manjarabad has all these and a lot more but sadly, remains one of the many heritage structures in Karnataka which have never got the  attention they deserved. Or the care which any other administration would have bestowed on it.