Researchers from the Max Planck Institute for Evolutionary Anthropology and other institutions said the original population of the gentle ginger-haired great apes is larger than previously estimated but so is the rate of decline. (Photo:AP)

Jakarta: The most comprehensive study of Borneo's orangutans estimates their numbers have plummeted by more than 100,000 since 1999, as the palm oil and paper industries shrink their jungle habitat and fatal conflicts with people increase.

The finding, which is to be published in the journal Current Biology, is in line with the International Union for Conservation of Nature's 2016 designation of Borneo's orangutans as critically endangered.

Researchers from the Max Planck Institute for Evolutionary Anthropology and other institutions said the original population of the gentle ginger-haired great apes is larger than previously estimated but so is the rate of decline.

The most dramatic declines were found in areas where tropical forests were cut down and converted to plantations for palm oil, which is used in a vast array of consumer products, and for timber.

"In these forest areas human pressures, such as conflict killing, poaching, and the collection of baby orangutans for the pet trade have probably been the major drivers of decline," the authors of the study said. 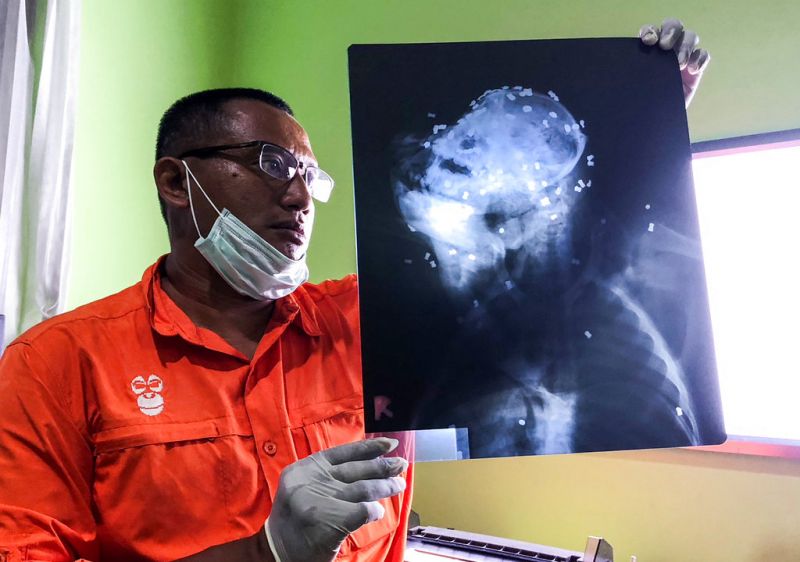 Photo released by Center for Orangutan Protection (COP), Principal of COP Hardi Baktiantoro holds an x-ray showing air rifle pellets lodged in the head and body of an orangutan during its surgery in East Kalimantan, Indonesia. (Photo: AP)

Erik Meijaard, a conservationist involved in the study, said current estimates of the orangutan population on Borneo range from 75,000 to 100,000.

He said the estimates vary because of uncertainty about how many animals are living in alien habitats such as plantations and burnt forests.

Sumatra's orangutan, a separate species, is even more endangered, with a population estimated at about 12,000 animals.

In a positive twist, the new study found Bornean orangutans are more resilient and adaptable than thought. They walk on the ground more often than previously known and can feed on plants that have not been part of their natural diet.

The authors said this may allow them to survive in smaller forests and in landscapes where the forest is fragmented.

"The one thing they cannot cope with, however, is the high killing rates seen currently," said Serge Wich of Liverpool John Moores University, one of the researchers.

"Orangutans are a very slow breeding species," he said in a statement. "If only one in 100 adult orangutans is removed from a population per year, this population has a high likeliness to go extinct.”

■Frizzy-haired, smaller-headed orangutan may be new great ape
■New species of orangutans discovered and they are already endangered
■Chantek, the orangutan who used sign language dies at 39