Where animals were loved

A judge inspects a cat during the Interantional Cat Show

The second day of PetEx 2017 saw a tsunami of animal lovers throng the Hitex Exhibition Center. 15,000 people visited  on day one and day two saw an even bigger number, with almost 25,000 excited visitors gracing the venue. PetEx also proved to be a great outing for families and friends, with both kids and adults enjoying the experience of petting myriads of animals that were showcased here. 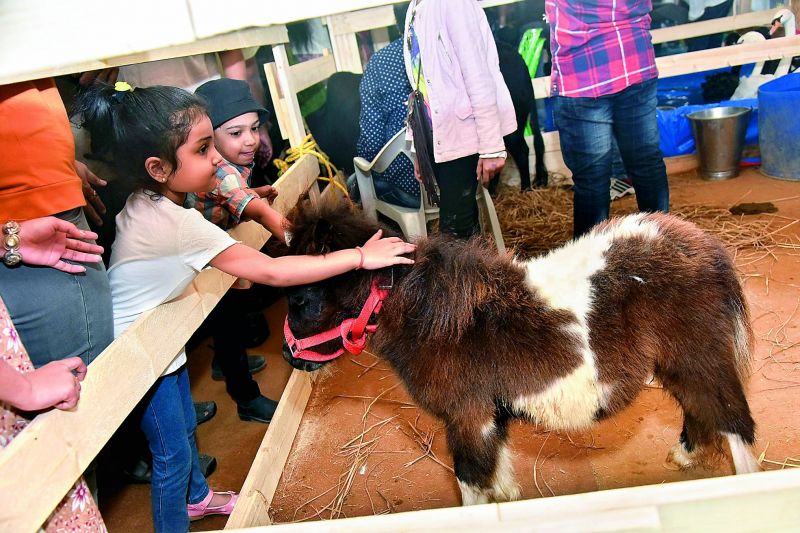 Kids at the venue pet a pygmy pony

An interactive ecosystem
The space occupied by Ananthashayana Heritage Farms, run by animal aficionado and lover of antiques, Praveen Chikoti, was clearly the show-stealer of the expo. Hundreds lined up to enter the space and witness the animals, birds and reptiles all under one roof. City dwellers even got the golden chance to hold rare tarantula spiders the size of saucers and wrapped non-venomous snake species from the central parts of America,  around their wrists. They even carried iguanas on their shoulders and had beautiful long-tailed birds perched on their forearms. People also got to see the elegance of swans imported from Europe along with other exotic animals like squirrel monkeys, ferrets among many others. 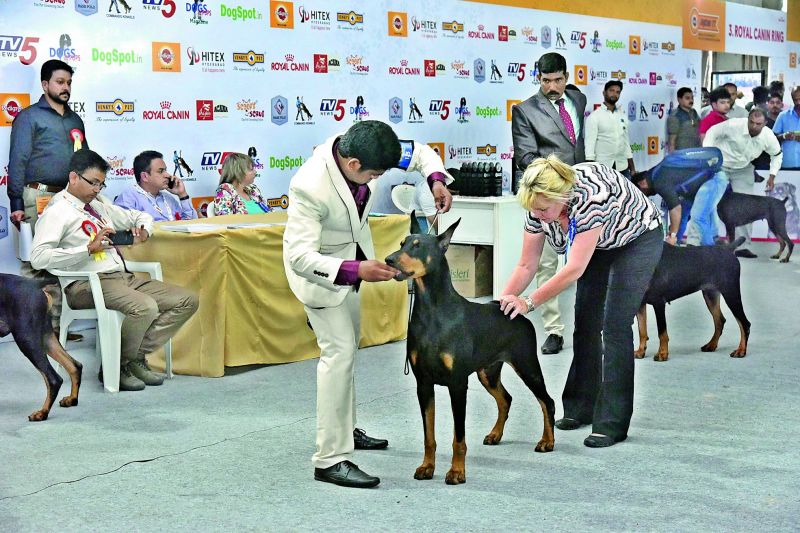 A doberman being inspected during the championship

Of saddles and paddles

The Nasr Polo Club displayed three of their beautiful horses to promote the hobby among children, who were mesmerised to touch the satin-like manes of the well-groomed horses and ponies. Breeze, a 12-year-old Indian half-bred horse did not shy away from the hands caressing her and was proud to show off the stamp of the Border Security Force on her side. The horse that once served the country is now retired and is spending her time at a polo club. 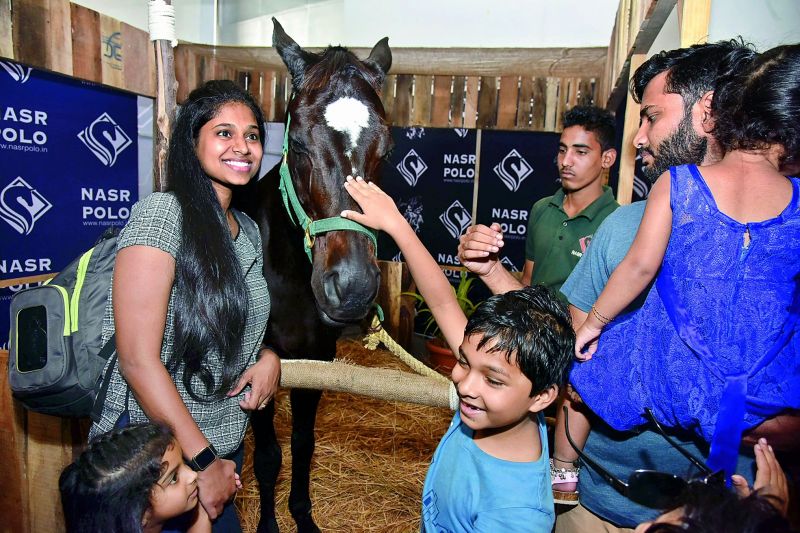 Breeze, an Indian halfbred Indian horse which serves with the BSF

The cats, which patiently waited in their cages on Saturday, were brought out and displayed in all their glory at the International Cat Show. 130 cats of all breeds, pure and half, showed off their clean coats and temperament while the judges keenly took down notes. The glistening trophies, marked with ‘CFAI’, were the coveted prizes that all the cats eyed. 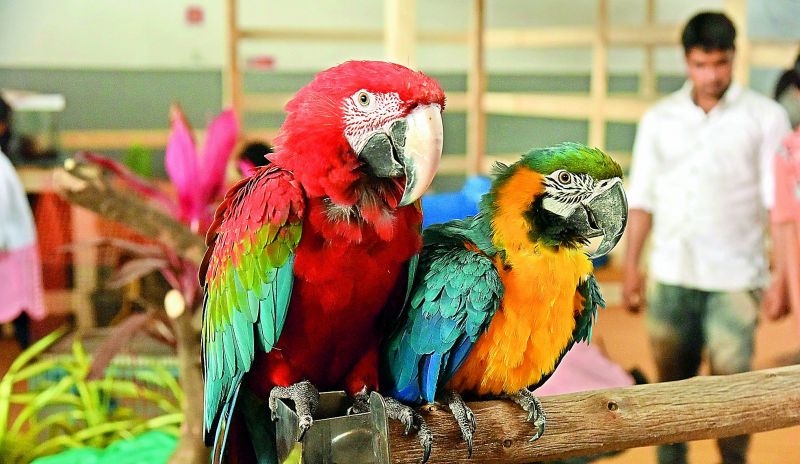 Parrots at the expo

The HyCan Championship Dog Show is one of the biggest shows of its kind in the country and breeders, groomers and dogs participating in this mean business. “The dogs need to be pure-breds. Just like what they see in human beauty pageants:, the contestant’s eyes, lips, face structure, their movement, etc, the same is sought in these dogs according to what their breeds are supposed to look like. They compete for championship certificates. Judges from Australia, South Africa and Russia are here to judge because we wanted to keep it impartial,” explains Subhash Babu, the president of Hyderabad Canine club and organiser of the championship.He adds, “There will only be one grand winner who will be awarded in the memory of our founder member and honourary secretary, Kiran Chitnis, who passed away just one month ago. It’s a cash prize of Rs10,000.” Interestingly, the participating dogs had their own grooming stations, where several Shih Tzus were being brushed and decorated. The canines were pampered at these stations before they walked in to be judged. 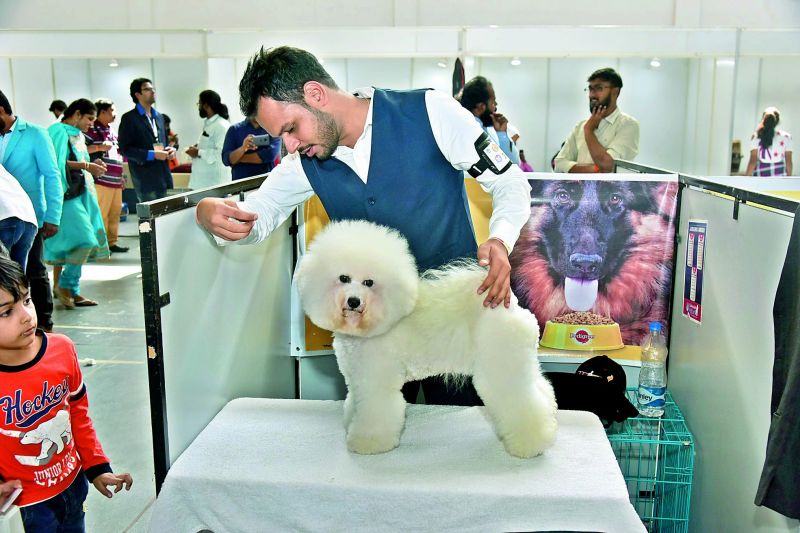 To some, it may seem that there’s an air of elitism around the championship. One of the guests, Siddharth, a software professional, observes, “It could be an interesting hobby for many, but it raises many questions in my mind. It is all about how well the dogs meet their breed standards — how they’re ‘supposed’ to look. Take the Shih Tzu for example, their noses can’t be longer than two inches, their stance should be perfect with no ‘defects’. Their eyes should be just the right colour. It reminds me of a certain time in human history, and that kind of gives me the chills.”