It’s a world of parakeets on the fig trees, as many as 3,000-4,000 of them gather on the trees in the evening on Dr Rajkumar Road.

In a city that is fast losing its green lung space to high rises and apartment complexes, there are some who have consciously held back from chopping down our trees to allow the many birds who once made the city their home, the chance to live, breathe and roost. Here in North Bengaluru, residents wake up to the sound of birdsong, and in the evenings, to the wonderful chirping of parakeets, settling down for the night.

As the sun dips over the horizon, and darkness descends, a green storm, envelops the fig trees that line the Brigade Gateway Hotel. From early evening onwards, the trees near World Trade Centre and the Sheraton Hotel in Yeshwantpur are  cloaked in a fluff of green that seems to have a life of its own - chirping, chattering incessantly, every branch swaying noisily. No, this isn’t some trick lighting, but literally, a swarm of parakeets that descend on the trees and roost here for the night, after a long day hunting for food. 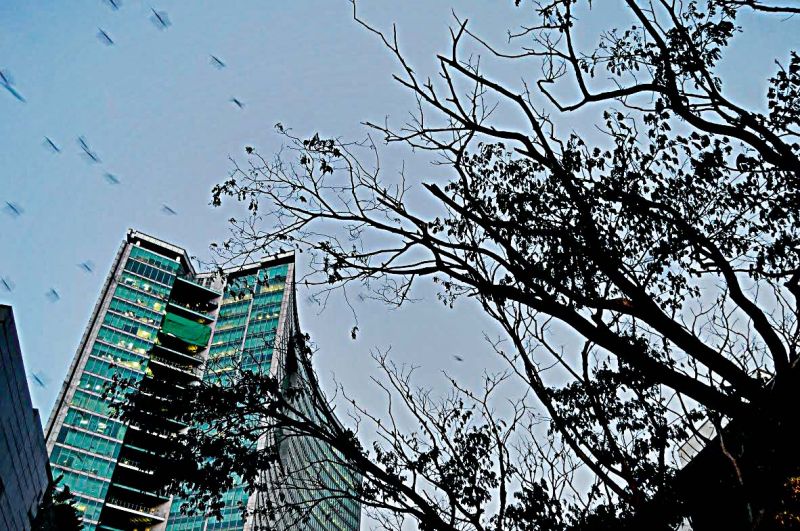 To Bengalureans who believed that rapid urbanization had scared away all manner of birds – no sign of the once ubiquitous crow – this is welcome news.
“It’s been happening over the years, and its wonderful that it’s still happening. We just love these parakeets staying around here, they have become a part of our lives,” says Ashwitha S,  who works at District 6, a pub and micro brewery on Dr Rajkumar Road bordering Malleswaram and Rajajinagar.

It’s a world of parakeets on the fig trees, as many as 3,000-4,000 of them. “They start coming in at dusk between 6.30 and 7 pm making beautiful chirping sounds, playing with each other, finding and settling at their favourite spots to spend the night. It’s a sight worth watching. They leave the trees at dawn (at  5.30-6 am), which we usually don’t get to see,” says Terrence Prasad, manager of the pub.

“We have foreign tourists from the nearby hotel visiting our pub regularly just
to watch the lovely birds. They come in around 5.30 pm with their cameras
and phones and start recording the homecoming of the parakeets,” Mr Prasad adds.

The Brigade Gateway Association has spared the half dozen trees even after discovering that a few of them were dying, just because the parakeets have made them their home.

The birds do not even mind the colourful lights put up on these trees during New Year, Diwali and Dasara, says Venkatesh a resident living nearby. “Even before Brigade Gateway, World Trade Centre, Hotel Sheraton and Orion Mall were built, these birds in thousands used to flock to this place. They seem to have adapted to the changes brought about by urbanization over the decades,” he explains.

Environmentalists call these places roosting spots, where birds gather to rest. “They do not breed or hatch eggs here. All they do is come in groups and rest for the night before leaving in the morning in search of food, says M.B. Krishna. “These roosting spots are traditional and if they lose it, they may not stick around and search for another place to stay in the neighbourhood,” the ornithologist says.

“There are several such rooster spots in the city, a real boon for birds, which
I do not wish to disclose because publicizing such  spots only will make them draw a lot of attention and spoil the natural ambience which the birds
love,” adds Mr Krishna.

So while the city turns into a concrete jungle with apartment complexes vying to outmatch each other, flying high above them are the parakeets to remind every city resident that the birds will keep adding wings and colour to our lives like they always have.