Scientists are now unraveling the mystery and say that this dry patch is because of the phenomenon in the Indian Ocean called Indian Ocean dipole and an increased cyclonic circulation in the south China region. (Representational image)

Kochi: This Karkidakam and especially the Karkidaka Vavu day surprised old timers and faithful alike with rain keeping away, when it was expected to rain heavily as is the wont.

Scientists are now unraveling the mystery and say that this dry patch is because of the phenomenon in the Indian Ocean called Indian Ocean dipole and an increased cyclonic circulation in the south China region.

“It was expected that the year 2016 would be a La Nina year (La Niña is the positive phase of the El Niño Southern Oscillation and is associated with cooler than average sea surface temperatures in the central and eastern tropical Pacific Ocean) and would produce excess rain fall over the Indian region, especially the peninsular region comprising South India.

But at present the ENSO (El Nino-Southern Oscillation) is neutral and the development of a strong La Nina is less likely,” said Dr M G Manoj, research scientist with the Advanced Centre for Atmospheric Radar Research (ACARR) of Cochin University of Science and Technology (Cusat) here.

“At the same time a strong negative IOD (Indian Ocean Dipole) continues. That is sea surface temperature is well above average in the eastern Indian Ocean and below average near Africa. This results in reduced rainfall activity over the peninsula, especially Kerala region. This negative IOD is expected to persist until the end of September,” said Manoj.

“Moreover the increased cyclonic circulation near the southern China region, which is currently on, has sucked in the moisture from southern Indian region which resulted in increased rainfall activity in Bay of Bengal and adjoining region, adding to the dry patch here,” he said.

Deficit of 60%, wayanad in for another drought

The Wayanad district is likely to face a drought like situation in the days to come following a 60 per cent deficit in rainfall during the first two months of south-west monsoon season.

According to Indian Meteorological Depa-rtment office in Thiruvananthapuram the average rainfall received by Waynad from June 1 to August 3 was 760.3 mm compared with normal seasonal average of 1893.7 mm. If rains fail to pick up in the next few weeks, Wayanad is likely to face a severe water crisis and drought like situation. 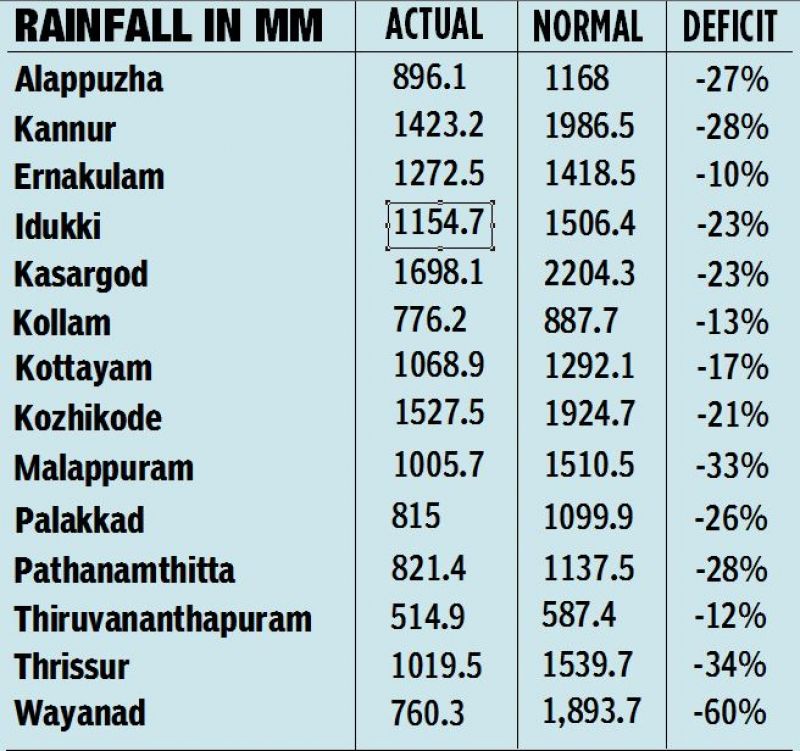 The south-west monsoon, beginning June and ending in September, accounts for the bulk of the rainfall for Wayanad as other parts of Kerala and now less than a month remains for filling the nearly 60 per cent deficit recorded in the first two months.

After Wayanad, Thris-sur and Malappuram districts are facing the worst rainfall in the state. Thrissur is facing 34 per cent deficit from June 1 to August 3 while Malappuram 33 per cent. Out of the 14 districts in the state 10 are facing  deficit rains.

Musi remains among the most polluted river stretches