Nalla’s documentary will reinforce the need to sustain, as things can very easily continue to slip.

If you’re a wildlife lover, a cat person, or just have an abundance of curiosity, then you’ve got to watch this cinematographer’s recently released documentary on Machli, the world’s most famous tigress that used to enthral spectators at the Ranthambore National Park in Rajasthan. Nalla Muthu — an award winning wildlife producer and cinematographer from Chennai — had been tracking the life of this majestic beast for a number of years and the result of it is a very personal and sentient tale of the Bengal tigress that is credited with rejuvenating the tiger population of the Ranthambore National Park where she had resided for most of her life. 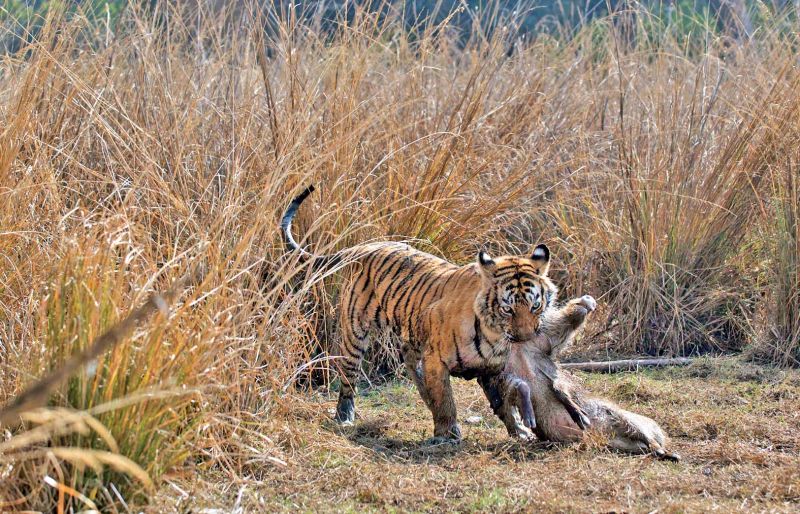 Titled ‘The World’s Most Famous Tiger’ and featuring on Nat Geo Wild, Nalla in an exclusive to DC, talks about his inspiration, his aims, and the difficulties involved in being a wildlife filmmaker. “There are different ways to promote conservation - one is through making films with a certain formula in which you directly say ‘save the tiger’. I feel a bigger impact is felt when people actually see tigers as sentient, mindful beings and bond with them,” quips Nalla.

Unlike domesticated pets that sort of obey human orders to an extent, connecting to the wild is a challenge in today’s urbanised world. So instead of lecturing on the importance of preserving the wild and sending similar messages, Nalla opts for a more personal approach that not only brings in a sense of connection, but also leads to a more fulfilling cinematic experience. He adds: “that is why I don’t say —’save the tiger’ — I show people why you should save tigers by creating a human connect. This way people will bond with these extraordinary creatures and see their stories unfold as I have for the past 10 years.”

Machli, who passed away in August of 2016, lived longer than most other wild tigresses and holds the tag of being the most photographed tiger on Earth, and has attacked and killed a 14-foot crocodile among other accomplishments. Nalla has captured these unique moments in the documentary with the aim of arresting the attention of a larger audience.

“My aim is to reach out and tell these stories to a wider local audience and communities, outside the small bubble of us wildlife enthusiasts, so that more and more people start sympathising and bonding with tigers and in turn empathise with the cause of protecting them,” he says.

Machli for a long while had been left on her own like most wild animals. Her celebrity status changed things though - while the ecosystem surrounding Ranthambore in the early days weren’t conducive enough for the tigers to sustain a long life, people’s feelings towards Machli made the government and the park intervene and feed her. Her life is a case where the common man’s affection towards a particular animal prompted the Forest Department of India to act and sustain the ecosystems in which tigers thrive.

Nalla’s documentary will reinforce the need to sustain, as things can very easily continue to slip. He reminds us of the difficulties that are chiefly overcome by passion: “I spend several years in making the film with my own funding, many times borrowing and struggling to survive, as there is not inflow of income during the production process. I don’t finish a film unless I get a good story, because I am passionate about film-making and wildlife.”

Wildlife film making is a worthy cause and most definitely not a get-rich quick scheme. “I could get a much higher profit and my life would be definitely a lot easier by churning out films every 6 months than focusing on one film every 2 years. Perhaps that is why there are not many wildlife filmmakers in the country,” he muses.

Whether you’re a filmmaker or not, be sure to catch his documentary on TV. Assuming most haven’t personally travelled to Ranthambore during Machli’s prime, ‘The World’s Most Famous Tiger’ will recreate as accurately as possible, what you might have experienced in person.

Climate change could force 216 million from their homes: World Bank