No healthcare for poor, Govt schemes in ICU

While government-run hospitals are very few and have a terrible track record, private hospitals hesitate to be part of these schemes as there is a lack of clarity from the government on reimbursements.

Universal healthcare has remained a mirage for successive state and central governments. While government-run hospitals are very few and have a terrible track record, private hospitals hesitate to be part of these schemes as there is a lack of clarity from the government on reimbursements. Experts suggest that the governments, instead of announcing new schemes, should focus on utilising the existing resources more effectively and launch an affordable health insurance scheme for all. Abhilash Mariswamy reports.

A large amount of money is being spent on various healthcare schemes by central and state governments, but many of these programmes are still lagging in reach at the ground level. This year’s Union Budget announced the largest government-funded healthcare scheme, but more than giving assurance, it only raised questions about its implementation.

The scheme made many promises, including a shift towards the use of generics from costly, branded drugs. But this “shift” has not resulted in any positive outcomes. That is because of non-availability of generics as distribution of these low-cost drugs continues to be the biggest problem, said doctors in the city.
The proposed shift to generics has left many doctors confused and the medical industry is divided on the effectiveness of these drugs. Many doctors said that they cannot try generics, especially on patients with life-threatening conditions like pneumonia, worsening asthma, sepsis, etc.

Health policy-makers often blame branded drugs for rising healthcare costs. Despite promises by the central government on the quality of generic medicines, the absence of an international-standard drug regulatory mechanism has deterred Indian doctors from trusting these drugs.

Dr Manohar said that most western generics follow the same stringent norms and undergo the same number of trials as compared to the original molecules. “In our country, there are a number of pharmaceutical companies who manufacture generic drugs. The onus is on the health regulators and the government to make generics trustable,” he said.

Dr Usha Manjunath, Director, Indian Institute of Health Management and Research (IIHMR), said that the few doctors who prescribe generics revealed that the quality is not up to the mark. “It is a tough call for medical practitioners and dispensers,” she said.

Experts pointed out that though the central government has released generic drugs, the problem is yet to be tackled and the progress is far from satisfactory.

Need a quality-driven treatment, not cost-driven
Many government-initiated healthcare schemes and services are limited to a few hospitals, like Bowring, Victoria, St. John’s and Kidwai, which prevents majority of the population from accessing quality public healthcare. Access to quality healthcare continues to be a major challenge for governments at the Centre and state, though they announce newer schemes frequently. Even at these hospitals, except a few, there is a severe lack of basic hygiene, staff, instruments and beds.

“There are many limitations when it comes to accessing healthcare at government hospitals, especially at the district level. A number of times, doctors at these centres refer patients to hospitals like Bowing and Victoria because of lack of facilities. But it only adds to the burden of the poor people, who have to travel from remote areas,” said Dr Sachin Sinha, secretary, Narain Sewa Sansthan.

“Also, funding for the treatment of the poor under various schemes is very low, which is sufficient only for basic treatment. These underprivileged people have to depend on government hospitals as they cannot afford the high cost of treatment at private hospitals,” he said. 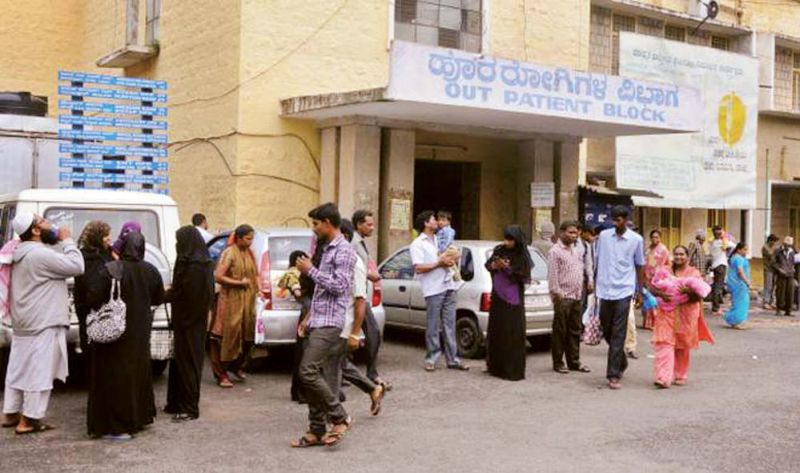 A report by IndiaSpend revealed that Out-of-pocket (OOP) healthcare expenses drove 55 million Indians into poverty in 2011-12, and of these, 38 million (68%) were impoverished by spending on medicines alone. Also, around 68% of people in India have limited or no access to essential medicines, a World Health Organisation report revealed.

Dr H. Sudarshan Ballal, Chairman, Manipal Hospitals, said, “India’s healthcare problem is unique, where more than three-quarters of tertiary healthcare is in the private sector. With poor penetration of health insurance schemes (private or public), a large number of people spend money from their pockets for treatment, which is expensive in most cases. As healthcare is not available for the masses, it leads to discontent and anger against caregivers.”

Healthcare has advanced, but it has also led to increase in the cost of treatment, making it unaffordable to a large section of the population, especially the poor. The inherent limitations of government schemes also make people suspect the intentions of the government.

A study revealed that the government spends Rs 1,112 on healthcare, per year per person. This is less than even the consultation fee at most of the top private hospitals. It works out to Rs 93 per month or Rs 3 per day!

Dr Ballal said that the government should focus on an aggressive public healthcare delivery system and work towards prevention and wellness, instead of treatment of diseases alone. “They should work towards upgradation of services at public hospitals and reasonable universal health insurance coverage in partnership with the private sector,” he said.

To make healthcare accessible and affordable to the poor, the central government launched Ayushman Bharat, while the state too announced Arogya Karnataka. But the private healthcare sector is confused as details of these schemes are not available. It’s also a mystery as to how the two schemes, which are on similar lines, will work.

Experts from the medical industry pointed out that increased spending on healthcare will not put an end to the problems. Instead, governments should channelise available resources towards better implementation of the existing schemes and also rope in the private sector to make quality healthcare available to all, they said.

COVID out there? Here's what doctors suggest to stay safe