Bionic: For a better tomorrow

If you thought being a single mother was a tough job, imagine doing it all with just one hand. Hyderabad-based Gayatri Roy Choudhury was born without an arm and has ever since tackled all obstacles in her life with a smile. But today, Gayatri’s contributions have reached people far and beyond as she works with experts at Hyderabad’s Makers Hive Innovations to make India’s first bionic arm at just one-tenth of its cost in the Western market.

Prosthetic arms available in India presently are only a wooden replica of an arm, with zero scope for movement. The team behind Gayatri’s bionic arm, is the brainchild of Hyderabad-based Pranav Vempati, P.M. Sai Prasad and Philip Thomas, who started the institute in April 2018 which has since been the hub of creation for a better tomorrow. 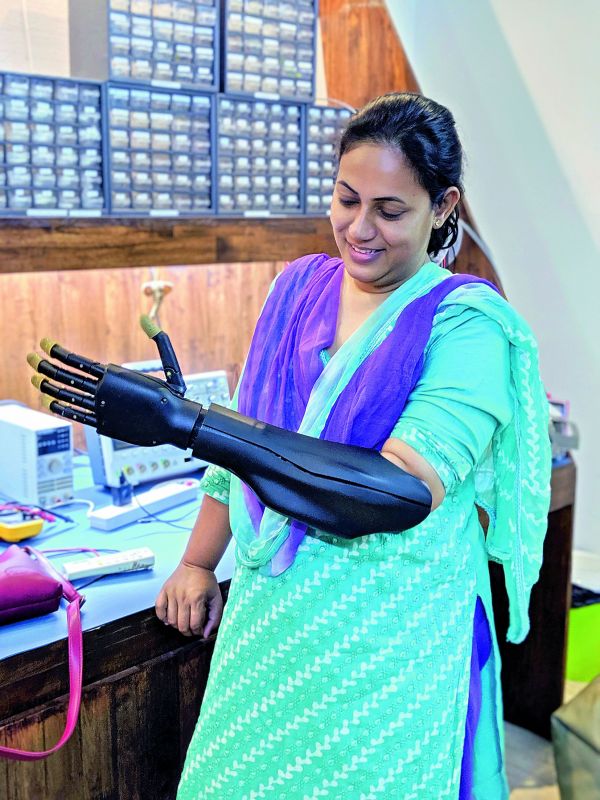 “The idea was to make quality healthcare available for everyone, at an affordable cost. A bionic arm today costs almost Rs 25 lakh in the West. I can proudly say that with the support from Gayatri and the hard work of our team, we have managed to make a bionic arm for just Rs 2.5 lakh in only 14 months,” says Pranav Vempati, co-founder.

With the successful application of the bionic arm, the team wish to begin a clinical trial called the ‘Cyborgs in India’, which  would help identify 100 people in need of an arm from different walks of life, professions and cultural backgrounds. The company would then provide these 100 people with a bionic arm for their continued research.

“Gayatri has been extremely understanding and supportive throughout the process. Imagine the hundreds of lives that we will transform through our creation. We don’t want to sell our creations to hospitals, which would then hike up the price further and turn it into a business. We want to be able to impact people’s lives and change the face of healthcare,” explains Pranav.

After several failed attempts to get a loan sanctioned for her surgery, Gayatri started to feel like there was no end to this tunnel. “One day, I received a call from Makers Hive who became aware of my situation through a family friend. They asked me if I could help them move forward with this initiative of theirs, and although I was initially hesitant, I decided to give it a go,” says Gayatri, adding, “There has been no looking back since. I can’t express how happy I am that they reached out to me. I have been able to test three grips so far on my hand — Pinch, which allows me to pick up a card; Power, which allows me to hold a glass or a bottle and the Handshake, allowing me to greet people. I can’t wait for the day when I am finally able to pick up my daughter with both my hands.”

“With the help of a prodigious team and the support of Gayatri, we’re pioneering a new bionic age inspired by futuristic technologies,” says P.M. Sai Prasad, co-founder and director.

Inside the mind of a bully

Increased risk of serious blood clots up to six months after COVID-19: Study