Pancreatic cancer is generally diagnosed late and begins by affecting the tissue of the pancreas. The cancer usually occurs when the cells in the pancreas develop mutations in their DNA.

Diagnosis of the cancer is usually very difficult since the organ is deep inside the body and therefore the diagnosis happens during the third or fourth stage. Dr Mohana Vamsy, surgical oncologist, says, “The Chief Minister was initially reported to be suffering from mild pancreatitis which is inflammation of the organ. But pancreatic cancer is a tumour in the pancrea that normally begins in the cells that line the ducts of the pancreas. More than the size of the tumour, it is crucial to note where the cancer has spread and which organs it has affected.”

Symptoms of the disease are often overlooked. Eminent gastroenterologist and Dr D. Nageshwar Reddy, says that the cancer is normally detected when there is an acute loss of appetite and weight along with diabetes. 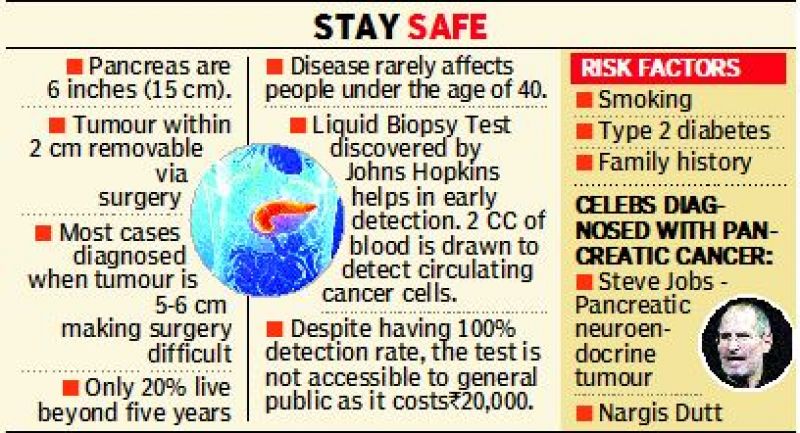 “When all these three symptoms appear together, it is problematic as mostly people with diabetes show increased appetite.” Treatment is more difficult when the tumour grows beyond two centimetres, which tends to happen because of late diagnosis.

Doctors advise frequent check-ups for people who get diabetes without having a family history of diabetes. In such cases the cancer can develop within six months. “We ask high risk patients i.e. whose family has a history of pancreatic cancer, who have a pancreatic cyst, who have chronic pancreatitis or have had a history of any cancer, to get regularly checked for the disease,” says Dr Nageshwar. He also said that the CA 19-9, detection test is used to check for antigens which are foreign substances released by pancreatic tumour cells. However, most patients come for the test when the cancer has crossed the preliminary stage and acute abdomen pain starts.

Another symptom linked to the cancer is jaundice. Dr Anand Kumar, a pancreatic surgeon, says, “When the bile duct is blocked by the tumour, it causes jaundice. Most people resort to Ayurveda and other natural medicines, which leads to late diagnosis. By then the disease will have spread to the kidney, liver and bones. Once the disease crosses the pancreatic territory, it is incurable even through surgery. And 99% of the cases are diagnosed when they have spread to the neighbouring organs such as the kidneys.”

Medical experts say that the only way to stay safe from the disease is to have regular checkups and to not ignore symptoms by dismissing it as back pain and weight loss.

Inside the mind of a bully

Increased risk of serious blood clots up to six months after COVID-19: Study