TN No 2 in cases of vector-borne diseases; recorded more than 4,845 cases

Vector-borne diseases that include malaria, kala-azar, Japanese encephalitis, dengue, filaria and chikungunya are being reported in large numbers in the state.

According to a report released by National Vector Borne Diseases Control Programme, the state stands second in total cases of vector-borne disease cases reported all over the country. Vector-borne diseases that include malaria, kala-azar, Japanese encephalitis, dengue, filaria and chikungunya are being reported in large numbers in the state. 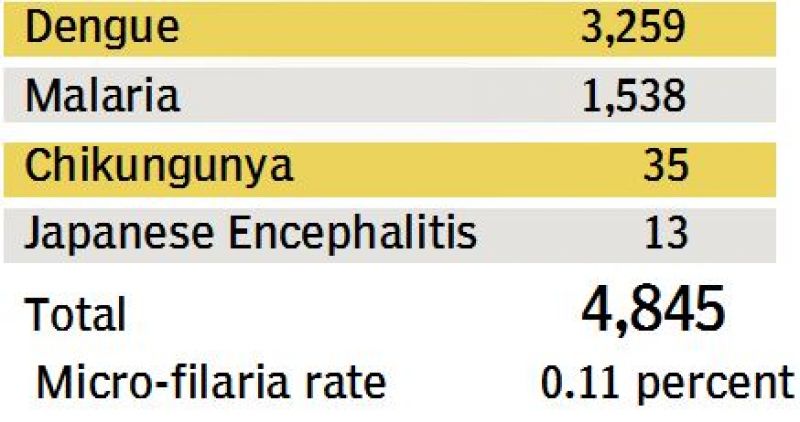 The surge in dengue cases is such that the number of cases reported till May 2017 has outnumbered the total cases reported last year. In spite of 42 filaria clinics and 21 control units in the State, around 20 districts of Tamil Nadu are filarial endemic.
Even after the easy availability of vaccines against Japanese encephalitis, people remain unaware of its symptoms and control, which leads to a large number of cases.

Though malaria cases have reduced, particularly, the monsoon is to again increase the burden on health officials as the vectors find easy breeding ground.

The health secretary mentioned that source reduction is being given impetus so that the outbreak can be avoided once a case is detected at the hospitals. State health department hopes to eliminate the high number of vector-borne diseases, especially the ones communicated by mosquitoes with the recently launched National Strategic Plan against mosquito-borne diseases.

Understanding the need of the hour after the high numbers of cases, Greater Chennai Corporation has stepped in to provide a higher level of awareness among the people, especially children as they are being the dominant victims of such diseases these days.

“We are working with state government to inform and educate students on how these cases can be prevented, simple precautions can reduce the high number of vector-borne cases reported in the State. Students are being involved in awareness campaigns on a regular basis to propagate the preventive measures against such diseases,” said health education officer.